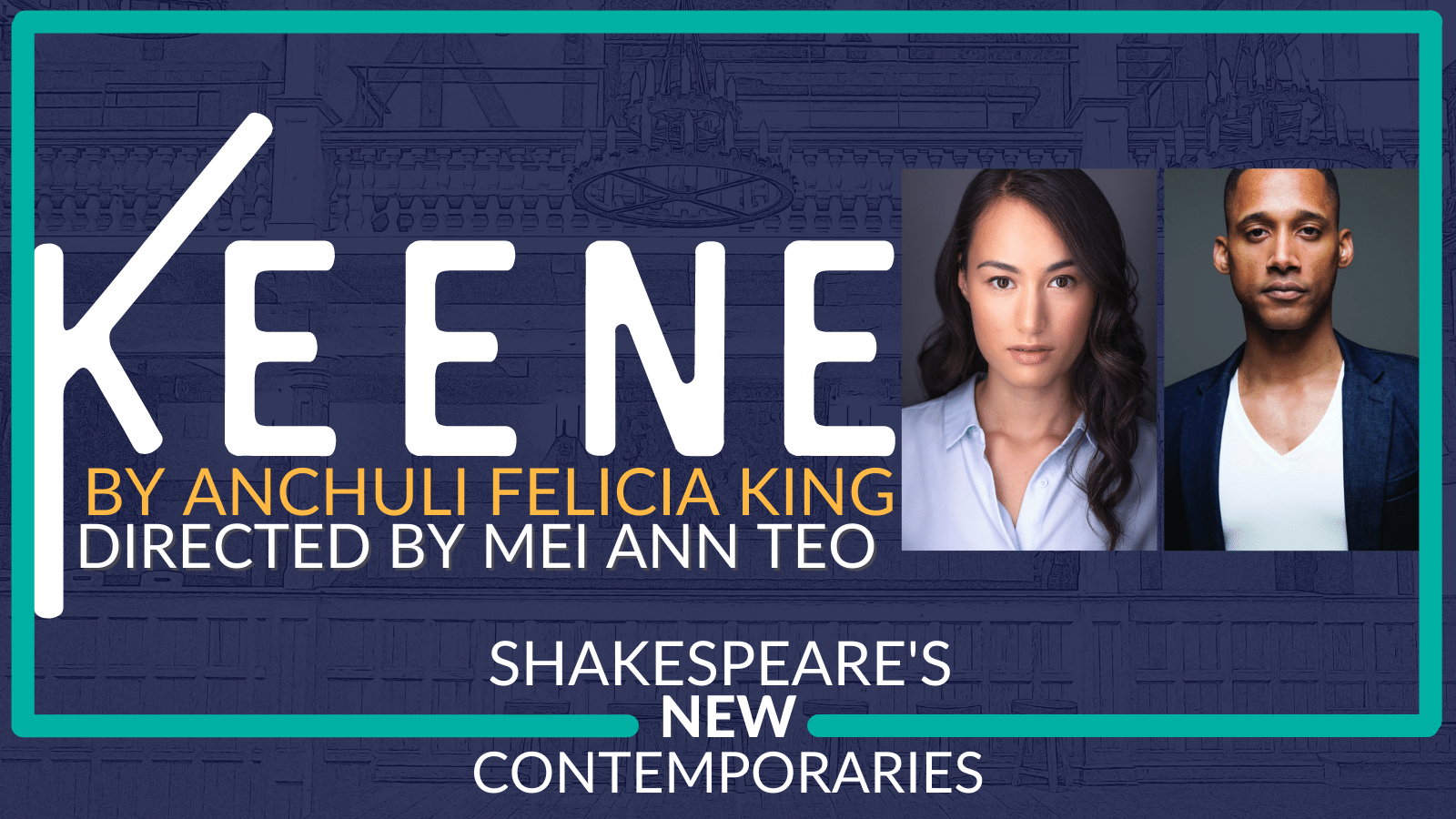 Keene was a winning submission from ASC’s Shakespeare’s New Contemporaries Program, a groundbreaking undertaking that is discovering, developing, and producing a new canon of 38 plays that are inspired by and in conversation with Shakespeare’s works. The program provides opportunities for playwrights of every background, perspective, and style to engage with Shakespeare and his stage practices and brings living writers into the world’s only re-creation of Shakespeare’s indoor theatre: the Blackfriars Playhouse. For plays selected in the Shakespeare’s New Contemporaries Program, the playwright receives a world premiere production of their play; $25,000 prize; and travel and housing for the rehearsal and development process.

Keene is a laugh-out-loud funny, thought-provoking play that finds two young scholars of color, adrift in a sea of white at a scholarly Shakespeare conference, where they grapple with their longing for recognition, the scrabbling competitiveness of their peers, and their own, sometimes hilarious, personal demons. Written “in conversation with” Othello, Keene is a story of love, ambition, and betrayal, in which conference participants Kai, a Japanese musicologist, falls in love with Tyler, the only student of color in his PhD cohort. Each night, Tyler dreams he is the subject of his thesis: Ira Aldridge, the first Black man to play Othello. Each night, Kai dreams of Tyler. As dreams start to merge with reality, Tyler and Kai are brought closer together. Yet Tyler, like Ira Aldridge and Othello, cannot perceive the inevitable betrayal of his closest ally. A wry look at always being the second-class genius of color, Keene is a playful riff on early-career academia, Shakespeare’s Othello, and the all-too-common remnants of racism that render people of color alternately invisible and hyper-visible in predominantly white spaces.

Brandon Carter (he/his) plays Tyler, the lone African-American Ph.D. candidate; current and ASC productions have featured Carter as King Henry in Henry V, Banquo in Macbeth, Prince Hal in Henry IV, Cassio in Othello, Orlando in As You Like It, and Cassius in 2019’s Julius Caesar. Carter is one of four Actor-Managers at ASC. Sarah Suzuki (she/hers) plays Kai, the love-struck scholar; past ASC productions have featured Suzuki as Maria in Twelfth Night and Bianca in Othello. Both lead actors performed in the 2019 workshop of Keene at ASC. ASC’s ensemble company comprises the remainder of the cast, and in keeping with Shakespearean practice, the company will perform thematic music before every show.

Tickets for Keene are on sale now at AmericanShakespeareCenter.com.

A note about health and safety: American Shakespeare Center pioneered pandemic safety practices in 2020 with its SafeStart Season, in which a full season of live theatre was produced with no cases of COVID reported from the artists, staff or audience. In the 2021 season ASC continues to comply with CDC and county and state health regulations, which may include socially-distanced seating, required mask-wearing, and hand sanitizer stations. Touchless ticketing and digital playbills are available. Up-to-date information on ASC’s SafeStart accommodations at performances are available at AmericanShakespeareCenter.com.

About the American Shakespeare Center

The American Shakespeare Center recovers the joys and accessibility of Shakespeare’s theatre, language, and humanity by exploring the English Renaissance stage and its practices through performance and education. Presented in Staunton’s Blackfriars Playhouse — the world’s only re-creation of Shakespeare’s indoor theatre — ASC’s innovative programming and “shamelessly entertaining” (The Washington Post) productions have shared the delights of Shakespeare, modern classics and new plays with millions over the past 30 years. Beyond the Playhouse, ASC is a hub for Shakespeare education and scholarship and tours nationally from Texas to Maine each year (currently suspended due to COVID). Founded in 1988 as Shenandoah Shakespeare Express, the organization became the American Shakespeare Center in 2005 and can be found online at www.AmericanShakespeareCenter.com and on Facebook, Instagram, and Twitter. ASC programming is sponsored in part by the Ambrose Monell Foundation, the Community Foundation of the Central Blue Ridge, The Shubert Foundation, the Virginia Commission for the Arts, and the generosity of countless donors.
###