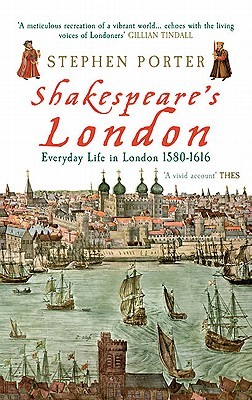 is a thorough and detailed look at the English metropolis during the early modern period. While other books have taken similar approaches, none have honed in quite so specifically on a particular place at a very particular time. Porter uses not just Shakespeare’s life but his time in London as his fenceposts, and this allows him to delve, as we like to say in ASC Education, deep and narrow into a moment in history.

Porter is nothing if not comprehensive. The book wends its way through many aspects of early modern life, particularly with regards to economic realities and social conventions of the common citizens of London. Porter devotes a lot of time to industry and mercantilism, and not unjustly, since trade formed the basis for London’s explosive growth in following centuries. He discusses the various neighborhoods and their relative statuses at length, and the pictorial sections of the books include a number of illustrative maps (though, since they are early modern in origin and scaled down to fit the page, these are not always easy to read). Throughout the book, Porter liberally mixes primary source accounts in with his narrative, adding valuable details to the picture he’s painting. I particularly appreciated that during the heavily economic sections of the book, since it gave the real human interest factor back to what would otherwise have been a rather dry summary of trade deals and market fluctuations.

Major events to do with monarchs and nobles only get coverage for how they affected the bulk of the populace. One of my favorite examples has to do with King James’s influence on the cloth industry. England had always done quite a lot of trade in both heavy broadcloths and lighter linens, but typically sold them overseas “in the white,” undyed. English dyers just weren’t as adept as those in other countries, nor could they dye as cheaply, so although finished cloth fetched a higher price, England had chosen to rely on its strengths and focus on creating a huge output of undyed cloth. In 1614, King James decided, on the advice of a wealthy alderman (who, coincidentally, lent the king money), that the country would, from then on, only export dyed cloth. The Dutch responded by banning imports of dyed cloth, since that was one of their major industries. James then banned the export of wool, the main raw material which the Dutch used. This trade war did not go well for the English, who did not have the expertise to turn out quality material in high enough quantities to match previous sales of undyed cloths. In 1617, with the entire industry in England threatening to collapse, James changed his mind, with the Privy Council declaring that it was ‘now his Majesty’s pleasure and resolution not to disturb the trade of whites with any further essay, but to leave the same to the train and course of trade now in practice and according to the use before the former alteration’ (116-117).

The book also does a great job of tying the social history into the world of the plays. Porter frequently refers to various plays by Shakespeare and his contemporaries, illustrating how the temporal reality of London found its way into so many stories on the early modern stage. Playwrights like Dekker and Middleton often put London itself right up onto the stage, and Dekker was also a pamphleteer, whose observations about the world around him tell us much about life in the era. Shakespeare may never have written a city comedy, but that definitely does not mean that his London was absent from his plays. Porter relates the conmen and petty criminals of London to Mistress Overdone’s customers in Measure for Measure, and he suggests that “Shakespeare’s metropolitan audience at The Winter’s Tale no doubt smiled at the pretentiousness of the newly-rich shepherd and his son’s shopping list for their sheep-shearing feast,” based on recognition of the produce and spices traded out of London to country burghers (120). He points out that the Boar’s Head tavern in Henry IV was likely the same as that in Great Eastcheap, near to where the Lord Chamberlain’s men then played in the winters. The diseases and pestilence mentioned in so many of his plays were those that the people of London lived with and feared spreading. Any Shakespearean reference to apprentices reflected the vast population of young men in the city who, while vital to the economic structure, were also apparently prone to lethargy and rioting. Shakespeare’s London clearly lives in his plays, no matter if they’re set in Italy, Egypt, or Bohemia.

My biggest criticism of Shakespeare’s London is that I think this book could have benefited from a different organizational structure — perhaps by sub-dividing chapters or by simply having more chapters. There are only eight in the 250-page book, and so each one has a lot of topical ground to cover. As a result, sometimes the sense of storytelling is rather haphazard. A few chapters get a little “info-dump”-y, while others seem to have a strong narrative which then gets derailed. The best example of that is when the section on printhouses and print culture comes in the middle of a chapter which is otherwise about demographics and the early modern life cycle. The information is both interesting and useful, but it sort of comes out of left field. Printing also doesn’t get a mention in the index (which seems to focus more on proper nouns than on broader topics), so if you picked this book up specifically looking for information on that subject, it would be difficult to suss out where to find it. Information about the playhouses and playgoing culture is also scattered through a few different chapters. On the whole, though, Shakespeare’s London is chock-full of fantastic, detailed information, much of it straight from the original sources. I think it’s most comparable to David Cressy’s Birth, Marriage, and Death: Ritual, Religion, and the Life Cycle in Tudor and Stuart England

: a compendium of information, almost overwhelming at times, but providing a wonderful window into the lives of everyday citizens who just happened to live four centuries ago. Shakespeare’s London is one of the “suggested reading” texts for the upcoming No Kidding Shakespeare Camp, and I’m looking forward to taking its insights with me as we travel through London in a few weeks.