Thank you for your steadfast support of American Shakespeare Center.

All current donations will go directly to sustaining the company during this temporary shut down and toward a timely restart in late May. 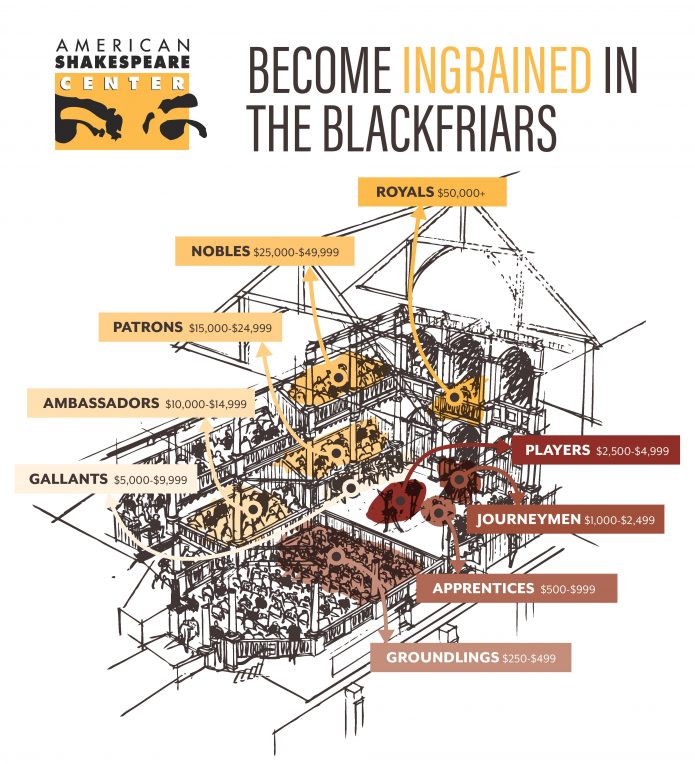 To create worlds out of words, it takes the imagination of a team of creative artists working together, decades of scholarship to help inform our understanding, a one-of-a-kind space, and an audience to receive the performance. Each part of the equation is indispensable, including you. When a moment happens on stage, you are there to add your part—your laughter, your tears, your gasps.

Benefits of sponorship include:

Represents sponsorship of the Season of your choice

Select from: Othello or The Merchant of Venice by William Shakespeare, Keene by Anchuli Felicia King, (already claimed!)

Select from A Midsummer Night’s Dream or Imogen by William Shakespeare, The Grapes of Wrath by John Steinbeck and adapted by Frank Galati, or The Defamation of Cicely Lee by Emma Whipday

Get in touch with our Development team to discuss sponsorship opportunities.

Epizeuxis is the rhetorical device which denotes the repetition of words, for example, Hamlet’s famous phrase Words, words, words. Members of this society have pledged ongoing monthly or quarterly gifts.

Maximize the impact of your gift with employer matching.

Check with your Human Resource Department to see what options are available through your workplace.

Often, all you need to do is fill out your company’s gift-matching form, and submit online or send it along with your donation to ASC. Sometimes your company will match your gift even if you’ve retired, or they will provide monetary donations to match your volunteer hours.

The following is an incomprehensive list of companies who have matching gift programs and/or have generously matched gifts for ASC in the past.

To be among the first to know about the 2020 Gala, e-mail development@americanshakespearecenter.com

Make a difference in the life of a high school camper.

The ASC Theatre Camp is America’s preeminent college prep program for Shakespeare scholarship and performance.  Each year over 70 students gain practical skills in theatre performance and connections that last lifetimes.

The Sidney Stark III Memorial Scholarship Fund supports the American Shakespeare Center’s Theatre Camp which empowers high school students to leap into college life through the learning experiences within Shakespeare’s text. Named for Sidney Stark, an English teacher who dedicated his life to sharing the joy of language, this fund invests in students’ performance training, academic exploration, and the opportunity to share their passion with new friends from across the country.

We hear from students every year who are eager to participate, but can’t afford the cost of camp.  That’s we we started the ASCTC Scholarship Fund – so generous patrons can make a difference in the lives of our campers.

With your gift, we can help more high school students rediscover the universality of Shakespeare’s language, and make that treasure their own. We can expand the reach and impact of ASCTC to a broader range of campers, from here in Staunton and throughout the United States.

Shakespeare had a soundtrack.

You can help support ours.

Music is an integral part of every ASC performance, onstage at the Blackfriars and on the road with the touring troupe. The Band Candy benefit fund is an opportunity for you to directly support the musicians you love at the American Shakespeare Center.

Your gift will be used to purchase new in-house instruments; provide music lessons, upkeep, and repairs; pay musician salaries; and so much more. Next time you see actors whaling on a shiny new saxophone, you’ll know you helped put it in their hands.

Celebrate with our rockin’ and talented actors while raising money for the music they make – that’s a pretty great two-in-one. Help us say “goodbye” to the winter Actors’ Renaissance and “welcome home” to the National Tour as they dive into the spring Tour Homecoming season with this evening of all-out jams!

Enjoy blues, folk, and rock-and-roll performed live and unplugged. All proceeds benefit the Band Candy fund which pays for the music you love to hear at the ASC.