Today, those of us in the northern hemisphere observe the summer solstice. It’s a great time of year, finally warm enough for the beach and the pool, students are out for the holidays or will be soon, the fireflies are out, honeysuckle and roses are in bloom, and the long hours of sunlight mean you can stay out on the porch well into the evening. With such bounty and festivity, it’s no wonder that Shakespeare wrote a whole play set on this holiday: A Midsummer Night’s Dream.

Science first: Solstices and equinoxes are determined by the earth’s axial tilt — not, as is a common misconception, by the distance from the sun. The earth will actually be at its aphelion, the farthest point from the sun, around July 5th, and at its perihelion, its closest point, around January 3rd. On June 21st, though we are farther from the sun, the earth’s tilt means that the sun falls in line directly over the Tropic of Cancer at 23.5° north latitude. This means that the northern hemisphere gets more of the sun’s energy during this time, and the southern hemisphere gets less. Six months from now, all that will be reversed; the sun will be directly over the Tropic of Capricorn, at 23.5° south latitude. What I find really fascinating about all of this is that it tells us just what a fragile habitable zone the earth exists in. A little more or less distance, a little more or less axial tilt, and the earth or parts of it might not be able to sustain any kind of life.

Of course, the exact way in which axial tilt affects the weather in any given location is pretty complex. Areas closer to the equator have less difference from season to season, whereas areas closer to the poles see wide variations. Since water and land heat at different rates, proximity to oceans can determine how quickly or slowly an area heats up into summer weather. Those heating and cooling rates also affect how precipitation systems form and move, which is why we tend to get more thunderstorms — and, in the North Atlantic and much of the Pacific, more hurricanes — from mid-summer through early autumn. Queen Elizabeth might have had axial tilt to thank, at least in part, for the freak August storms that helped to finish off the Spanish Armada in 1588. 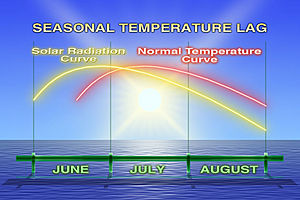 Because of these variations, meteorologists assign different seasonal designations based on, well, the weather. For temperate zones in the northern hemisphere — like the US and England — this means that meteorological summer begins June 1st, autumn on September 1st, winter December 1st, and spring on March 1st. These dates mark the transition point for each season. The hottest point of summer for these regions falls well afterwards, mid-July through early-August, because of something called “thermal lag” or “seasonal lag,” which has to do with the varying rates at which the earth’s land, water, and atmosphere absorb all of that solar radiation. Since it takes a while for all of that to reach equilibrium, we don’t feel the heat of being pointed right at the sun until a few weeks later.

So, we now call June 21/22 the “first day of summer” because our common lexicon has sort of split the difference between these concepts. It’s the day when we begin moving further away from the sun, axial-tilt-wise, but when our region is just starting to head towards the hottest and stormiest part of the year. The shifting of the weather seems to have influenced Shakespeare when he wrote A Midsummer Night’s Dream:

TITANIA
Therefore the winds, piping to us in vain,
As in revenge, have suck’d up from the sea
Contagious fogs; which falling in the land
Have every pelting river made so proud
That they have overborne their continents:
The ox hath therefore stretch’d his yoke in vain,
The ploughman lost his sweat, and the green corn
Hath rotted ere his youth attain’d a beard;
The fold stands empty in the drowned field,
And crows are fatted with the murrion flock;
The nine men’s morris is fill’d up with mud,
And the quaint mazes in the wanton green
For lack of tread are undistinguishable:
The human mortals want their winter here;
No night is now with hymn or carol blest:
Therefore the moon, the governess of floods,
Pale in her anger, washes all the air,
That rheumatic diseases do abound:
And thorough this distemperature we see
The seasons alter: hoary-headed frosts
Far in the fresh lap of the crimson rose,
And on old Hiems’ thin and icy crown
An odorous chaplet of sweet summer buds
Is, as in mockery, set: the spring, the summer,
The childing autumn, angry winter, change
Their wonted liveries, and the mazed world,
By their increase, now knows not which is which:

England was experiencing particularly nasty, wet summers in the mid-1590s, and Shakespeare has Titania describe how her quarrel with Oberon has disordered the seasons and caused storms and floods. Summer and winter have become mixed-up. Comparing Titania’s description to accounts of English weather from 1594-1597 is one way that scholars have worked to date the play’s composition.

And now, the social history: While earlier civilizations like the Sumerians and Egyptians tended to measure seasons by floods and harvests, European societies from the Greeks forward marked seasons by the passage of the sun and stars.  The beginnings of each season were actually on the cross-quarter days — February 1st, May 1st, August 1st, and November 1st. Many East Asian calendars also followed this distinction, and many continue to do so to this day. Those cross-quarter dates became important holidays for the Celts, and those festivals were later merged with Christian saints’ days and holy days — February 1st’s Imbolc became Candlemas, May 1st’s Beltane became May Day, August 1st’s Lughnasadh became Lammastide, and November 1st’s Samhain became All Hallows’ Day. Solstice and equinoctial holidays were not as important for Celtic and Germanic cultures, but various associations still bled over. The Christian calendar created quarter days on or around the 25th of those months: Lady Day in March, Midsummer in June, Michaelmas in September, and Christmas in December. Apart from being religious observations, these were also the days in England when taxes and rents were due. Moveable feasts like Easter and Pentecost tend to fall near some of these dates as well, though not in every year, thanks to the way in which the liturgical calendar calculates them.

For Shakespeare, the strongest summer holiday correlation may have been to either St. John’s Eve, celebrated on June 23rd, or possibly St. Peter’s Eve, celebrated on June 28th. Both festivals frequently involved bonfires and feasting, while other rituals focused on purification of or by water, connecting to St. John’s role as a baptist. Many folk medicinal traditions collected around St. John’s Eve  and Day as well. It was considered the best time to collect certain kinds of plants, including St. John’s Wort (pictured at right), used to treat mild wounds, menstrual cramps, snakebites, among other things. St. John’s Wort was thought in the Middle Ages to be particularly good at driving out demons — and it is now used in the modern day as an anti-depression treatment. Exactly which other plants were associated with the holiday tends to vary by local tradition, but they were often those used in herbal remedies to ease pain — and perhaps for this reason, the holiday has often had a connotation with witchcraft and the supernatural. Jumping over the St John’s Eve bonfires was meant to prove virility in men and to help maids find their husbands, the ashes from those fires were thought to bring good luck to homes, and roots gathered on St. John’s Eve were said to be particularly powerful in love spells. Some of these customs continue to the modern day in certain Catholic populations, with notable celebrations in Ireland, Spain, France, Quebec, and New Orleans. These traditions of magic and fertility may resonate in A Midsummer Night’s Dream with the “little western flower” and “Dian’s bud” that Oberon and Puck use to enchant Titania, Lysander, and Demetrius.

Midsummer also had theatrical connections long before Shakespeare: this was the favorite time of year for the mystery play cycles, local religious pageants put on by trade guilds in major cities and towns throughout England. Though mystery plays were officially banned by King Henry at the beginning of the Reformation, many continued to perform or were illegally revived through Elizabeth’s reign, and they likely influenced the earliest playwrights of the early modern era. We’re doing our bit to celebrate at the ASC by offering 20% off the Study Guide for A Midsummer Night’s Dream, and tonight we officially open Romeo and Juliet, thought to be written at about the same time as Midsummer. You can see similar threads in the two plays, not only through language and the focus on courtship and romance, but also in the season. Romeo and Juliet takes place in mid-July, two weeks before Lammastide. Perhaps Friar Laurence’s fixation on herbal remedies has to do with the gathering that took place on St. John’s, just a few weeks earlier?