One of the most enjoyable aspects of my job is the ability to stumble into discoveries while working on something else entirely.

Yesterday, I was editing a bit of text to go into our study guides. We adhere to the Folio text as far as stage directions, line breaks, and entrances/exits go, because we think there’s a reason those things were put where they are. Are some of them printer errors? Sure. But we like to err on the side of at least trying things the Folio way first, then making adjustments, because more often than not, you make great discoveries that way. Doing theatre the way we do at the ASC, you sometimes discover that, yes, that person is supposed to enter that early even though no-one sees or talks to him until later in the scene. My favorite example is from 2.2 of Macbeth; many modern editors used to move Macbeth’s entrance until just before Lady Macbeth says “My husband!”. This change turns his earlier line into a “within” delivery — but if your actors are playing the darkness, there’s no reason at all to move the entrance from where the Folio has it, before Macbeth’s first line. You lose so much wonderful stagecraft by delaying his appearance on the stage.

Having found nuggets of revelation like these in the texts, I’ve started getting agitated (much to the delight of my boss, Sarah) when a modern editor changes or moves a stage direction for no logical reason, and so yesterday, as I was pulling from 1.2 of Richard III, I saw the direction “She looks scornfully at him” and mentally tsked at the editor. ‘Surely,’ I thought, ‘that’s not in the Folio. Surely some editor has been taking liberties.’ Off to the Folio I went, prepared to delete the extraneous editorial suggestion, but much to my alarm… that stage direction exists. What’s more, it’s not the only bizarrely specific direction in the scene. “Spits at him,” “He lays his breast open. She offers at with his sword,” and “She falls the sword” also appear: 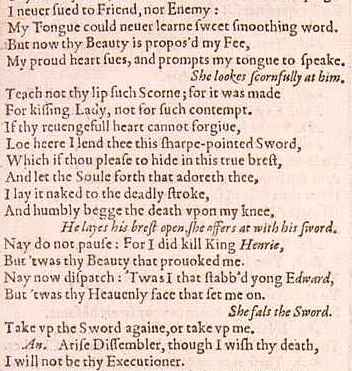 I kind of can’t get over this. It’s just so… weird. A quick poll of the office revealed that I was not the only one who would’ve lost money betting on those directions being editorial. We all thought they sounded far too modern, far too post-Ibsen to be original to the Folio. These stage directions are alarmingly specific, but there’s really no reason for them, because all the action is embedded in the lines. I don’t need a direction telling me that Lady Anne looks scornfully at him when Richard says “Teach not thy lip such scorn.” Nor do I need the direction for Richard to lay his breast open and for Lady Anne to “offer at” it when Richard has just spent five lines instructing her to do that. As attuned as I’ve become to embedded stage directions, the explicit ones feel redundant.

The directions in the 1597 Quarto are not so specific or detailed, but still pretty odd for early modern theatre. The Quarto gives us “She spitteth at him” and “Here she lets fall the sword,” but not the other two, more explicit, directions. How did those creep in, then, I wonder? 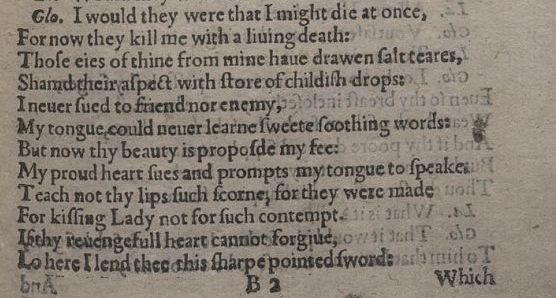 Sarah suggested to me that this might fit in with recently-bandied-about theories regarding the training of boy actors. Perhaps the text for the Folio was taken off of a prompt book that had been specifically designed for helping a younger boy through the part of Lady Anne? That suggestion makes me want to look through the rest of the play, at the other female roles, to see if the trend continues. Is 1.2 an anomaly, or is it representative of the role?

It isn’t as though there aren’t other weirdly specific (or bizarrely obscure) stage directions in the early modern period. Two of my favorites are from two of Shakespeare’s contemporaries, “She runs lunatic” in Kyd’s Spanish Tragedy and “Enter Hans, like a Dutch shoemaker” and “Enter Rafe, being lame” in Dekker’s Shoemaker’s Holiday. Those type of directions are the exception rather than the rule, though, which is why they’re notable when they do occur.

Thoughts? What are your favorite odd stage directions from the early modern period?