Today is Star Wars Day (May the Fourth be with you all), and, in honor, I would like to take a look at some of the Shakespearean inspiration that George Lucas used when creating the Space Western we all know and love. The ASC’s Actors’ Renaissance Season dramaturgy intern for Henry VI, part 3, Paul Rycik, has already explored the parallels between Episodes 1-3 of the Star Wars saga and the Henry VI trilogy, but this only scratches the surface of the potential Shakespeare/Star Wars connections. Lucas’s memorable characters, epic plot, and quotable scripts share traits with many of Shakespeare’s plays, and knowledge of their synchronicity only adds enjoyment to the experience of either.

So basically — and just go with me here — the Star Wars Saga (if retold using Shakespeare characters) goes a little something like this:

Episode 1: The Phantom Menace – For Anakin Skywalker’s side of things, the story plays out like the last half of The Winter’s Tale. Camillo (Qui-Gon Jinn), Polixenes (Obi-Wan Kenobi), and Florizel (Padme Amidala) find Perdita (Anakin Skywalker) in Bohemia (Tatooine). Camillo realizes that there is something special about Perdita and takes her with him back to Sicilia (Coruscant). On the political side, the story follows Richard II with the overthrow of Richard II (the Galactic Federation’s Supreme Chancellor) by Henry Bolingbroke (Senator Palpatine), who becomes King Henry IV (Supreme Chancellor).

Episode 2: Attack of the Clones – Anakin’s older now, so for Episode 2, he’s mostly Hamlet with a little Romeo at the end. Hamlet (Anakin) is awkwardly in love with Ophelia (Padme) but has some personal, mother-related issues to work out first. So, he goes home to Denmark (Tatooine), where his mother dies. In a fit of anger, he kills quite a few people over it (but not himself, and there’s no Osric, which is really a shame). At the end of the film, Anakin (now Romeo) and Padme (now Juliet) are married in secret on Naboo (in fair Verona), but instead of Friar Lawrence, they have C-3PO and R2-D2 as witnesses. Politically, this episode is when things start getting Henry VI-ish. Richard, Duke of York (Chancellor Palpatine) convinces the Earl of Warwick (Darth Sidious) to work for him instead of against him. Further, Jack Cade (Count Dooku) leads a Separatist faction that gives Richard, Duke of York (Chancellor Palpatine) the excuse he needs to put together a powerful army.

Episode 3: Revenge of the Sith – Here is where Anakin Skywalker joins the Henry VI plotline, but he has a little Macbeth in him, too. Like Macbeth, Anakin has let supernatural consideration (witches’ prophecy for Macbeth, the Force for Anakin) color his thinking, but within the politics of the story, he enters Episode 3 as Richard Plantagenet, with the decapitated head of Somerset (Count Dooku) in hand. Richard, Duke of York (Chancellor Palpatine) has taken over for Obi-Wan Kenobi as his father figure, and Anakin is quickly on his way to a white rose (or a black helmet). Richard Plantagenet (Anakin) revenges Clifford’s (Mace Windu) attack on Richard, Duke of York (Chancellor Palpatine) and, by submitting fully to the Dark Side becomes a Darth Vader who “can smile, and murder while I smile.”

Episode 4: A New Hope – Again, the story starts like The Winter’s Tale and Tatooine is still Bohemia (at least Tatooine has the climate and topographical features it’s reputed to, which is more than can be said for Bohemia). This time, though, a different Camillo (Obi-Wan Kenobi), Polixenes (C-3PO), and Florizel (R2-D2) find a different Perdita (Luke Skywalker) and realize that she has got something special about her. At this point, Luke Skywalker transforms into a sort of Prince Hal, unprepared for his filial future. So, they go to The Boar’s Head (Mos Eisley) and meet Pistol (Han Solo) and Nym (Chewbacca). Luke, like Hal, is intimately related to, but outside of the rebellions against the government that his father runs. We will not discuss the Luke/Leia business, however, because that all gets a little too much like John Ford’s ‘Tis Pity She’s a Whore.

Episode 5: The Empire Strikes Back – In both Henry IV and in The Empire Strikes Back, rebellions rage. However, the most important parallel I want to draw is between Yoda and Owen Glendower – both are vital to the rebellions of which they are a part, both are thought of as magical (or Force-ful), and both speak with funny accents. I think I’ve made my point. That said, Prince Hal (Luke Skywalker) must come to terms with the future in store for him and make the choice about what sort of power he will choose to yield, thus approaching the turning point in his story. Meanwhile, Beatrice (Princess Leia) and Benedick (Han Solo) enact their merry war of words – Leia’s “I’d just as soon kiss a Wookiee” versus Beatrice’s “I had rather hear my dog bark at a crow” and Han’s “Your worshipfulness” versus Benedick’s “Dear Lady Disdain.” Just as Benedick agrees to fight Claudio for Beatrice, Han joins the Rebellion, not out of strong political beliefs, but because he wants to satisfy the woman he loves.

Episode 6: Return of the Jedi – Little known fact, there are no Ewoks in Shakespeare. However, here is where Hal, now Henry V (still Luke Skywalker) becomes a strong leader. The final battles are fought and England (the galaxy) finds peace. Also, Leia does as Rosalind, Imogen, and Viola do and disguises herself as a man in order to take care of herself and the people she loves.

As a culture, we love an epic, the rise of the weak against the strong, the fruition of forbidden love, and the fall of the over-ambitious; both Shakespeare’s canon and the Star Wars Saga provide these oh-so-satisfying tropes in spades. The influence of Shakespeare (along with samurai history, Frank Herbert’s Dune, mid-twentieth century spaghetti westerns, and so much more) pervades the very fabric of the Stars Wars Universe. In my imagination, Shakespeare reached out his gloved hand (he was a glovemaker’s son, after all) to George in a dream and spoke these fateful words, “Lucas, I am your father.” 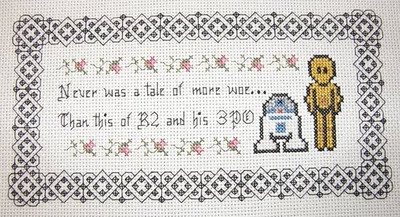