In my capacity as Academic Resources Manager, I deal with a lot of text. I prepare sides and scripts for workshops and lectures, and I insert the text for relevant scenes into our Study Guides. This process always involves some editorial judgment calls — looking back to the Folio, determining how much of the scene to include, deciding whether to trim some bits out of the middle to narrow an activity’s focus, etc. It’s been a long time since I cut a full script, however. The last time was in 2006, when I directed Romeo and Juliet in undergrad — and I knew far less about textual studies then than I do now. I’m going to be serving as the dramaturg for the 2013 Actors’ Renaissance Season Julius Caesar, and as part of that process, I’ve also taken on the responsibility of cutting the script.

The thing about Julius Caesar is that you don’t have to cut a lot. The play runs 2438 lines in the Folio, the only early modern version that we have (I got off easy, not having to compare to any quarto editions). We aim for about 2300 lines for a show, with the goal of a two-hour production. I knew going in that I was probably going to want to trim slightly more than that, however, for a few reasons. One is that this is going to be the first show in the Ren Season, so it certainly can’t hurt to trim down what the actors have to tackle in those first three days. Another is just to tell a tighter story; there are lots of moments in Julius Caesar that, while certainly not unplayable (particularly with such talented actors as the ASC is fortunate to have), aren’t always as gripping as they might be. Shakespeare spends a lot of time showing off his Plutarch, but some of those references may seem obscure or downright bizarre to a modern audience. My inner Latin geek appreciates them; my practical side can trim them without suffering too great an attack of conscience. Finally, knowing that this is going to be the most-played school matinee of the artistic year, I knew I wanted to streamline the text for maximum appeal, to key in on the relationships that define the play, the overlap and tension of those political friendships.

The trouble, though, is that there’s just so much good stuff in this play. Take Cassius, for example, who talks more than anyone except Brutus (possibly only because he dies before Brutus). At first glance, you would think that the play could do with a lot less of him and not suffer terribly. So much of what he says, however, is such delicious language. He’s a spitfire, choleric and quick-tempered, but no less eloquent for that temper; rather, it seems to fuel and fire him, leading him to cram his speeches with vivid detail, incisive observations, and inventive structure. Cassius is also useful as a contrast to Brutus, not just as a matter of character, but rhetorically as well. Cassius has a complex elegance in his speech which Brutus utterly lacks; in order to get through to Brutus, Cassius has to try different tactics, and it’s always the least sophisticated one that elicits a response. Cassius is, in many ways, far, far cleverer than Brutus; it shows in his political canniness (as in his desire to do away with Antony as well as Caesar, recognizing an inevitable threat, and in his awareness of military realities in Acts 4 and 5), and it also shows in his use of words. Shakespeare’s language clearly juxtaposes Cassius’s political astuteness and practicality with Brutus’s blunt honor and intractable morals. This dynamic is not only interesting but critical to the operation of those relationship dynamics that so interest me — and yet, I know, those long speeches are where attentions will be most likely to wander. So I had a challenge: to balance the need to cut something with the desire to preserve all the character information that the language provides.

Then there are the minor characters. Could I cut that line from Decius Brutus or Metellus Cimber? Well, sure. The play would lose nothing imperative. But then that pretty well excises his reason for being in the scene; I don’t want to make a character extraneous, and I don’t want to rob an actor with a smaller track in this play of a potentially juicy moment (and since Brutus, Cassius, and Antony thoroughly dominate the line count, there are a lot of smaller tracks).  So, how to balance this? How to keep the sensation of a bustling Rome, crammed with ambitious men and craven followers, while still making cuts that will help the production to present a clear and focused story? Or how about a character like Portia? Certainly, I could trim some of her speeches down — but she really only gets the one scene to connect with the audience. I couldn’t bring myself to butcher those moments, but to justify keeping all of that intact, I had to find something else to sacrifice elsewhere.

I ended up taking a very surgical approach to the text, trimming from within speeches rather than hacking out large sections in their entirety. A line here, a line there — it adds up, and eventually, I had cut over two hundred lines, but never more than a few at a time. Occasionally it hurt my rhetorical soul a bit, to excise some repetitions or additions — but that was the choice I had to make. If the rhetorical form was crucial to the moment, to the character’s persuasive approach, I kept it, but if it seemed extraneous, if the character had already made his rhetorical point, I could consider it for the chopping block. Consider the following:

CASSIUS
You are dull, Casca,
And those sparks of life that should be in a Roman
You do want, or else you use not.
You look pale, and gaze, and put on fear,

And cast yourself in wonder,
To see the strange impatience of the heavens:
But if you would consider the true cause
Why all these fires, why all these gliding ghosts,
Why birds and beasts from quality and kind,
Why old men fool and children calculate,
Why all these things change from their ordinance,
Their natures and pre-formed faculties,
To monstrous quality; why, you shall find
That heaven hath infus’d them with these spirits,
To make them instruments of fear, and warning
Unto some monstrous state.

That anaphora (repeated beginnings) in the middle is an interesting structure, and there’s no denying that it adds something to this speech. But, this is something Cassius does almost every time he has a speech of more than ten lines, so it’s not as though it is an unusual device or one which makes a unique point; we’ll hear the same device elsewhere, and the audience will still know that Cassius is given to repetition and to over-emphasizing his point. Those lines also have some nice evocative language — but, we’ve had plenty of descriptions of the strange portents in this scene already, and we’ll have more in 2.1 and 2.2. By cutting this, we’re not losing anything we don’t get elsewhere. On the other hand, in the following:

And why should Caesar be a tyrant then?
Poor man, I know he would not be a wolf,
But that he sees the Romans are but sheep:
He were no lion, were not Romans hinds.

I had initially marked that final line for cutting, but I ended up putting it back in. In some ways, it’s redundant. The audience hears the predator-prey analogy and understands it; why do we need a second iteration? Because, I think, there’s a crit
ical symbolic difference between a wolf and a lion. The second analogy, then, is almost corrective — Cassius grudgingly granting Caesar the association with a nobler animal, but only by comparison to the other craven Romans. The first analogy could then read more like, “I know he would not be a predatory, but that he sees the Romans are but prey,” whereas the second reads more, “He were no great and powerful man, were not Romans weak and yielding.” The connotation is different, and so I retained what originally seemed a redundancy. We also hear about a lion stalking the streets and a lioness whelping in the streets, and so I think it’s important to retain that association of the lion with Caesar.

The largest change I made was for purely practical reasons: our Ren Season has twelve actors in it, and the opening of 3.1 calls for fourteen characters to be on-stage simultaneously. Thirteen enter together, as per the Folio stage direction: 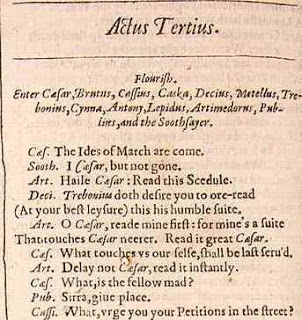 –then, only ten lines in, Publius speaks, though he has no written entrance. So, I struck Lepidus for that scene (he never speaks and no one refers to him) and I combined the characters of Publius and Popilius into one figure. That necessity led to a little creative cutting and line reassignment, but it seems to work. Our actors will still have a challenge to untangle, though, as that still leaves twelve characters entering simultaneously at the top of 3.1, plus someone to conduct the Flourish — and two of them will have to change from having been Portia and Lucius in 2.4.

Before I sent the cut script off to Artistic Director Jim Warren and Associate Artistic Director Jay McClure, I gathered a few of my friends to do a read-around of the text. With only five people in the room, I anticipated we’d be doing a lot of talking to ourselves, but that actually wasn’t the case as frequently as I’d expected. Because Brutus, Cassius, and Antony control so many scenes, most characters end up reacting to one of them rather than to each other. Just doing that read-around taught me a lot about how the various scenes function. Hearing the cut text aloud was helpful; I actually ended up highlighting more lines that I think I could cut, if we needed an even shorter script — if someone wanted to do a 90-minute version, for example, I think I would have no trouble at all getting it there. I gave Cassius a few lines back after this read-around, I snipped a few lines elsewhere to compensate, and I now have some good ideas about what else we could trade off if someone wants other lines back in. I feel quite positive about it, on the whole; I don’t think I slaughtered any sacred cows, and the surgical approach means that, hopefully, most audience members won’t notice the omissions at all.

So, we’ll see how it turns out. Once Jim, Jay, and at least one actor have looked at it, I’ll get the final comments back, and then I’ll start preparing the cue scripts. That process will be a whole other adventure with this play, and one which presents some fascinating possibilities (for which I feel I should probably apologize to our eventual Antony in advance). But that, Dear Readers, will be another blog post.