Having completed this year’s Study Guides, I am now neck-deep in dramaturgical work — and happy as the proverbial clam about it. Dramaturgy is particularly important when the play is itself a historical one, not only for the context of the history depicted, but also for the early modern context in which the author was writing. The actors need to know how their characters relate to each other, what the story of the play covers, and what conflations, adjustments, or flat-out errors there might be in the playwright’s version of events, but it may also be helpful to know what societal and cultural conditions the playwright might have been reacting to — or contributing to. Knowing what broader conversation the play might have been a part of in its own day can help actors to tell the story most effectively to a modern audience.

The past two weeks, I have been working simultaneously on the packets for the upcoming Actors’ Renaissance Season’s Julius Caesar and for the Staged Reading of Edmund Ironside. Though these both involve similar kinds of research pertaining to historical events, primary documents, and chains of cause-and-effect, they’ve been quite different experiences for me based on my level of familiarity with the periods involved. As I am half a classicist, researching Julius Caesar has been a dream — going back to Plutarch, Appian, and Suetonius is like visiting old friends, and since I mostly have the storyline set in my memory, compiling the packet has been more a task of confirming my sources and pulling juicy quotes out of them.

Researching Edmund Ironside, however, drew me into a period of history I did not previously know that much about: the late-10th and early-11th century, in the decades leading up to the arrival of William the Conqueror. Even in my medieval history courses in undergrad, it’s something that tends to get skipped over between the fall of the Roman Empire and the rise of the Plantagenets. We get a brief nod to the various invading tribes, a mention of Alfred the Great “unifying” England (though it had an appalling tendency to fall right back apart again), and then we skip merrily on to the Norman Conquest. The Danelaw was something I had seen on maps but never really understood, and the transmission of the crown remained incredibly murky. I had a lot further to go on my own knowledge of the background to this play before I could convey any of it usefully to actors.

Primary sources from this period are few and far between, so I couldn’t jump to those as readily as I could for Julius Caesar, and even secondary sources are less easy to get one’s hands on. I found I was able to rely on two excellent podcasts: The History of England and Rex Factor (both of which I can highly recommend to any English history enthusiasts). Leaning on their guidance, I was able to sort out this series of events leading up to the events of Edmund Ironside: 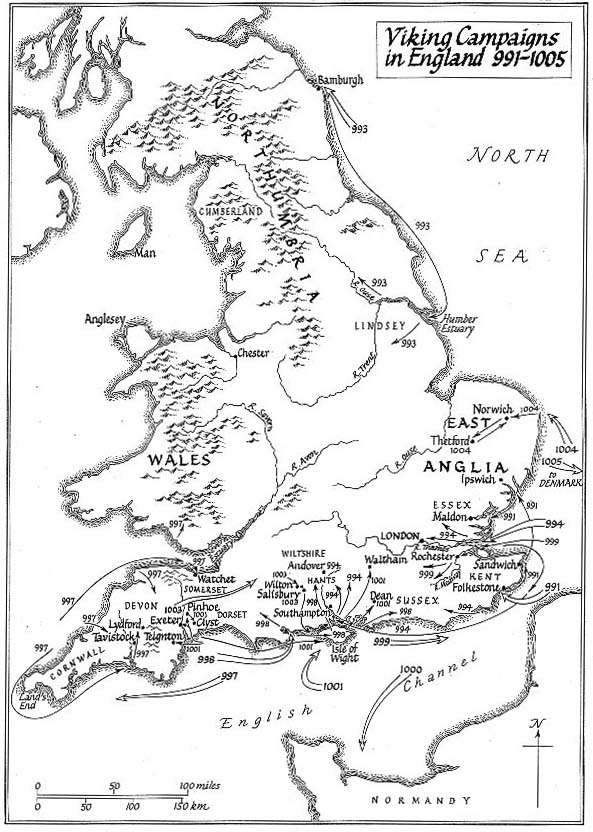 Not to spoil something that happened nearly a thousand years ago, but Canute eventually prevails. Twenty years later, however, control of the English crown ended up reverting back to the Saxon descendants of old Aethelred, simply because they ran out of qualified Danes. The dynastic victory was short-lived, however; Edward the Confessor (an overly pious and weak-willed king who would set the form for Richard II and Henry VI) did not have issue of his own and failed to specify an heir. The Saxon Earls of Wessex seized control based off of an ambiguous gesture the dying king may or may not have made, supposedly indicating Harold Godwinson as his heir. Edward had feared that family’s power, however, and had not liked Earl Godwin personally, and so had spent much time cultivating relationships in Normandy, where he had grown up in exile. Duke William felt sure that Edward had intended the crown for him — and thus began the invasion which marks the start of English history as most of us know it.

At the heart of all of this is a succession problem — something that plagued the English time and again. We tend to look back at history through a filter, and what several centuries of more-or-less unchallenged succession have taught us is that the oldest son of the king gets to be king when Dad dies — and if there’s no son, then it’s the oldest daughter. Simple and
straightforward. But this wasn’t always the case, and the English had to spend a few hundred years sorting out how their succession would work. The Germanic tradition, which caught on in much of Europe following the collapse of the Roman Empire, was to divide property more or less equally between all of one’s sons, and to dower daughters accordingly, so that they would take property with them to their husbands. This splitting, recombining, and sub-splitting of property is how the Holy Roman Empire ended up its hundreds of kingdoms and fiefdoms, and how the prolific French kings were frequently ending up with more Ducs-royales than they knew what to do with.

In English succession, well into the 15th century, might tended to make right. The tradition capped off by Henry Tudor had its roots here, centuries earlier. English law’s ambiguity on this matter had led to trouble again and again: Aethelred and Edward the Confessor created similar problems to those of Henry I (when his male heir died unexpectedly and he tried to leave the kingdom to his daughter Matilda, his nobles rebelled and chose his nephew Stephen instead, leading to a decades-long civil war), Henry II (you can see his troubles on-stage in The Lion in Winter), Edward III (his male heir died, and no one quite seemed certain if it should pass to his young grandson or to an adult, capable son), Henry V (died young, leaving his 9-month-old son King, with a host of bickering uncles ready to fight for control), and Henry VIII (had trouble conceiving a male heir, had to change the entire course of English religion in order to get one). The cycles repeat themselves in almost alarmingly similar patterns.

As Elizabeth Tudor entered her dotage with no direct heir-apparent, the future of England was again uncertain, as it had been so many times in the past. The English populace was restless, and not without cause, particularly for those who knew their history. During this period, a spate of plays crop up dealing with previous iterations of the succession crisis, perhaps reflective of London’s mood towards the end of the 1590s. Edmund Ironside fits in nicely to the set, focusing not only on the importance of designating a clear heir, but with the added bonus of using patriotic themes to emphasize the need to pick one without too many troublesome continental entanglements. It’s interesting to me to be looking at these plays and these historical cycles now as an American. We may not have issues of primogeniture or hereditary succession to worry about, but we’re definitely currently concerned with the succession of control of our government.

This Sunday, October the 28th, you can see two succession-oriented plays on stage at the Blackfriars Playhouse: come for the 2pm matinee of King John and stay for the 7:30pm Staged Reading of Edmund Ironside. The Staged Reading is Pay-What-You-Will and open to the public, so we hope to see you there!