I recently completed one of my Big Projects for the year, and it was one that was a little new and different for me — a dramaturgy packet for use in the Actors’ Renaissance Season production of Julius Caesar. I was excited to tackle it, since Caesar is a pet favorite play of mine. I have a strong classical background in addition to my early modern training, which made dramaturging this show a natural fit for me. The interpersonal contortions of loyalty that surround the assassination of Julius Caesar make this period of classical history particularly fascinating. Revisiting my old Roman buddies was (as anyone who passed my desk while I was working on the project could attest) a giddy delight for me.

The primary challenge with creating packet for the ARS is figuring out how much of which information to present. Everything needs to be streamlined for maximum efficiency and useful for the actors — playable information, not details that have no bearing on the production. 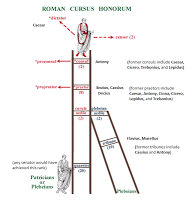 So, however interesting I may find the nuances of the Roman political system or maps of the city in the first century BCE, those are not things that are as likely to help the actors. On the other hand, a brief explanation of the cursus honorum, the sequence of term-limited political offices a Roman man would aspire to hold, can provide helpful information about status in the same way that the more familiar ranks of English nobility can, if I present it in the right way. I settled on an annotated diagram (right, original from vroma.org), depicting not only the levels of offices, but which characters hold which offices at the time of the play, and which offices they’ve held before. Hopefully this will help to translate the relative power dynamics into terms that the actors can use on stage. Relationships are also important; several actors have mentioned in conversation or in podcasts that knowing who was related to whom helped during the Henry VI plays, so I created a family tree for the important members of the Roman elite. As it turns out, nearly all the major figures in Julius Caesar are connected through blood or marriage as well as politically, causing Sarah to refer to the play as “really the world’s worst family reunion.”

There are also ways in which Julius Caesar gives me a little more leeway to provide historical information than some other plays might, because Shakespeare adheres more nearly to his sources (mostly Plutarch) here than he does almost anywhere else. Compared to his English histories, Julius Caesar is practically a documentary. For that reason, I’ve done a lot with those original sources, pointing out scenes and lines that seem to come straight out of Plutarch or Appian, but I’ve also included some of the corollary information that doesn’t make it directly into the play, but might still be helpful — like popular perceptions of Cassius’s character or the chaos of the assassination scene. Consider this description from Plutarch’s Life of Brutus:

As Caesar entered, the senate rose in his honour, but as soon as he was seated the conspirators surrounded him in a body, putting forward Tullius Cimber of their number with a plea in behalf of his brother, who was in exile. The others all joined in his plea, and clasping Caesar’s hands, kissed his breast and his head. At first, Caesar merely rejected their pleas, and then, when they would not desist, tried to free himself from them by force. At this, Tullius tore Caesar’s robe from his shoulders with both hands, and Casca, who stood behind him, drew his dagger and gave him the first stab, not a deep one, near the shoulder. Caesar caught the handle of the dagger and cried out loudly in Latin: “Impious Casca, what doest thou?” Then Casca, addressing his brother in Greek, bade him come to his aid. And now Caesar had received many blows and was looking about and seeking to force his way through his assailants, when he saw Brutus setting upon him with drawn dagger. At this, he dropped the hand of Casca which he had seized, covered his head with his robe, and resigned himself to the dagger-strokes. The conspirators, crowding eagerly about the body, and plying their many daggers, wounded one another, so that Brutus also got a wound in the hand as he sought to take part in the murder, and all were covered with blood.

Compare that to 3.1 of Julius Caesar:

CAESAR
Are we all ready? What is now amiss
That Caesar and his senate must redress?

METELLUS CIMBER
Most high, most mighty, and most puissant Caesar,
Metellus Cimber throws before thy seat
An humble heart,–

CAESAR
I must prevent thee, Cimber.
These couchings and these lowly courtesies
Might fire the blood of ordinary men,
And turn pre-ordinance and first decree
Into the law of children. Be not fond,
Thy brother by decree is banished:
If thou dost bend and pray and fawn for him,
I spurn thee like a cur out of my way.
Know, Caesar doth not wrong, nor without cause
Will he be satisfied.

METELLUS CIMBER
Is there no voice more worthy than my own
To sound more sweetly in great Caesar’s ear
For the repealing of my banish’d brother?

BRUTUS
I kiss thy hand, but not in flattery, Caesar;
Desiring thee that Publius Cimber may
Have an immediate freedom of repeal.

CASSIUS
Pardon, Caesar; Caesar, pardon:
As low as to thy foot doth Cassius fall,
To beg enfranchisement for Publius Cimber.

CAESAR
I could be well moved, if I were as you:
If I could pray to move, prayers would move me:
But I am constant as the northern star,
Of wh
ose true-fix’d and resting quality
There is no fellow in the firmament.
The skies are painted with unnumber’d sparks,
They are all fire and every one doth shine,
Yet in the number I do know but one
That unassailable holds on his rank,
Unshaked of motion: and that I am he,
Let me a little show it, even in this;
That I was constant Cimber should be banish’d,
And constant do remain to keep him so.

CASCA
Speak, hands for me.

This comparison shows how close Shakespeare’s version of the scene is to the historical record, but also how much he leaves to the actors to choreograph. Would his original company have been familiar enough with Plutarch’s version of events (and Appian’s, and Suetonius’s, and Nicolaus of Damascus’s) to fill in the gaps? I don’t know. It’s as possible that they did as that they didn’t. Our actors may find some details helpful or inspirational but others irrelevant or impractical. My job is just to present the information so that they can make those choices — and I know I can’t wait to see how they handle this moment.

Of course, Shakespeare being Shakespeare, he still takes some liberties. Between 3.3 (Cinna the Poet) and 4.1 (the Second Triumvirate in action), he jumps several years and an entire war that occurred as Antony and Octavius struggled for control of Caesar’s legacy. Why does Shakespeare do this? I’m not sure. It certainly helps to focus the action more on Brutus and Cassius, augmenting the idea that this is really Brutus’s tragedy, not Caesar’s, and it blunts some of the political complexities of the situation. So how much do the actors need to know about what happens during that interlude? I’ve tried to summarize as succinctly as possible, including links to the (vast wealth of) information in Plutarch, should any of the key players involved in those dynamics be interested in exploring that further. Mostly what they need to know, however, is that Antony and Octavius are only tenuous allies, with plenty of bad blood already between them.

Another problem with any history play is how much background information to give on events that occur before the play begins. How much do the actors need to know about Caesar’s conquests or his war with Pompey? By the time the play opens, after all, Caesar has already subjugated Gaul and Pompey is already dead. Pompey never appears on stage, even as a corpse, but many characters do refer to him, from the first scene onward. Murellus berates the commoners for cheering the man who “comes in triumph over Pompey’s blood” when previously they had cheered Pompey with equal fervor. The conspirators and Antony clearly tell us that Caesar dies in Pompey’s Theatre, at the feet of Pompey’s statue, even though no statue would exist on a bare stage like that of Shakespeare’s Globe or our Blackfriars Playhouse. These details, I think, mean that Pompey has some lingering, ghost-like relevance in the play — relevance that Shakespeare’s actors and audiences would likely have been more aware of, since the Roman greats were more common reading then than they are today. Similarly, some information on Caesar’s conquests may help to explain why he was such a big deal, why the conspirators hated him so much, and whose allegiances shifted away from Caesar over time. But, again, I don’t want to overload with details that really have no bearing on the events of the play — so summary again becomes important.

After determining what information I wanted to provide, I had to figure out how to present it in a way that maximized its usefulness for the troupe. After a few introductory sections, the bulk of the guide is a scene-by-scene breakdown of questions that the play raises. The lovely Miriam Burrows furnished me with the idea to create a secondary table of contents, listing information by character rather than by topic. I also listed the relevant characters at the top of each page in the scene breakdown, and the bibliography includes annotations for each character. I hope that this system of cross-referencing will help the actors get to the information they need quickly, without bogging them down in information that has no direct relevance for them.

Some dramaturgy packets, especially if they need to help design teams as well as actors, will include extensive image galleries with information about costumes, settings, character appearances, and previous productions of the play. These details have less relevance at the ASC, particularly in a Ren Season production. While I did include a short image gallery in the packet itself, I decided to place the bulk of visual information on a Pinterest board. This not only cuts down on the length and file size of the packet, it also allows me a little more freedom with what I include: original Roman frescos, sculptures, and mosaics; pictures of modern re-enactors; maps and landscapes; and a few screencaps from HBO’s Rome (because I just can’t help myself). Some of the actors may not be interested in this sort of visual inspiration, but it may help others, especially when they go to pull costumes. Even if they don’t go the traditional toga-route, the colors and fabrics may still help them when they start thinking about what clothes will best communicate their characters to the audience.

Rehearsals for Julius Caesar start on New Year’s Day, so my next Adventure in Dramaturgy will be sitting in the room while the actors work, ready to answer any questions that may come up on the fly. I’m already planning out ways to pre-load my dashboard with the major sources and pertinent links in order to maximize my usefulness to our troupe. Check back in January for my thoughts about sitting in on rehearsals, and be sure to come see Julius Caesar and the other shows in our always-exciting Actors’ Renaissance Season.