Those of you who have been following the Education blog for some time are by now familiar with our work on Wordles. We use these word clouds primarily to introduce to students the idea that Shakespeare’s vocabulary is not what can make reading Shakespeare difficult. It helps to eliminate some of the fear, to look at all the words set out in this way, and to notice that there are very few, if any, unfamiliar words. Most of those which are strange will either be names or places, or else are fairly easy to figure out the meaning of once restored to their context. We include this as part of our Basics section in ASC Study Guides, and we can use it as a bridge into discussing rhetoric (ie, the order the words come in — usually what can make a passage difficult, and usually something that conveys character information). But, as I’ve discussed before on this blog, I’ve also discovered that distilling scenes into Wordles can reveal other information as well, about how Shakespeare is directing the audience’s focus, what information he chooses to share or to conceal, how he sets a mood, what topics are important for that scene.

I’m in the process of creating a blended Study Guide for both the Henry IVs and The Merry Wives of Windsor, and while building the Wordles for those plays, I noticed something that I haven’t been able to get over. Take a look at the Wordle for the first 100- lines of Henry IV, Part 1: 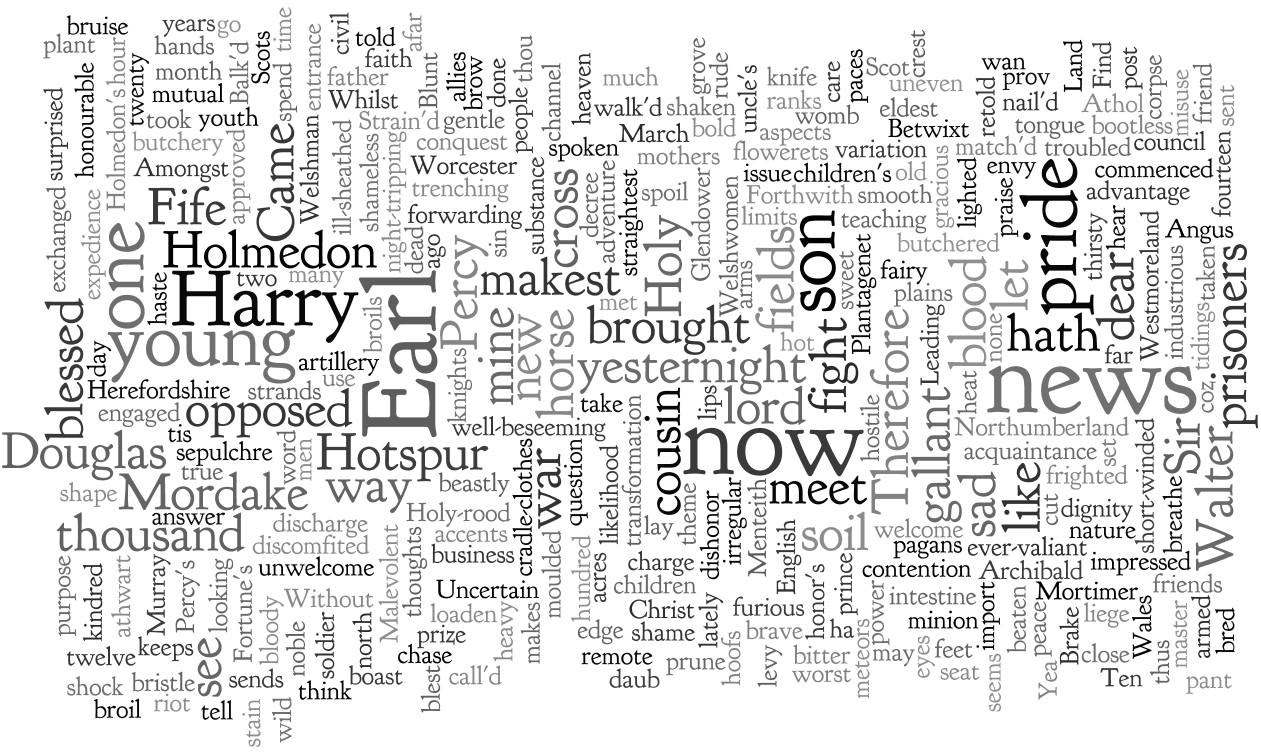 The two largest words, repeated most frequently, are “news” and “now”. Closer examination of the text shows that those most prominent words gets repeated four times — not, actually, a whole lot, which tells me that there isn’t a lot of repetition in the first 100 lines of the play. (And what does that, in turn, tell us about the verbal choices made by King Henry and Westmoreland?). A lot of the other oft-used words are names of people involved in the battles — but, considering the low degree of repetition overall, just getting said twice can increase a word’s prominence, as is the case with “Douglas” and “Mordake”. What information is Shakespeare giving us about the energy of this first scene? To me, it bespeaks a sense of urgency — but somewhat unfocused urgency. Henry isn’t just dealing with one problem here; he’s dealing with several all at once. As I can see by this Wordle, he’s having issues with Earls. He’s having issues with his son. He’s having issues with Scotland. These are all news, and they are all immediate issues he needs to solve.

So, that was interesting enough on its own, but then I did the Wordle for Henry IV, Part 2: 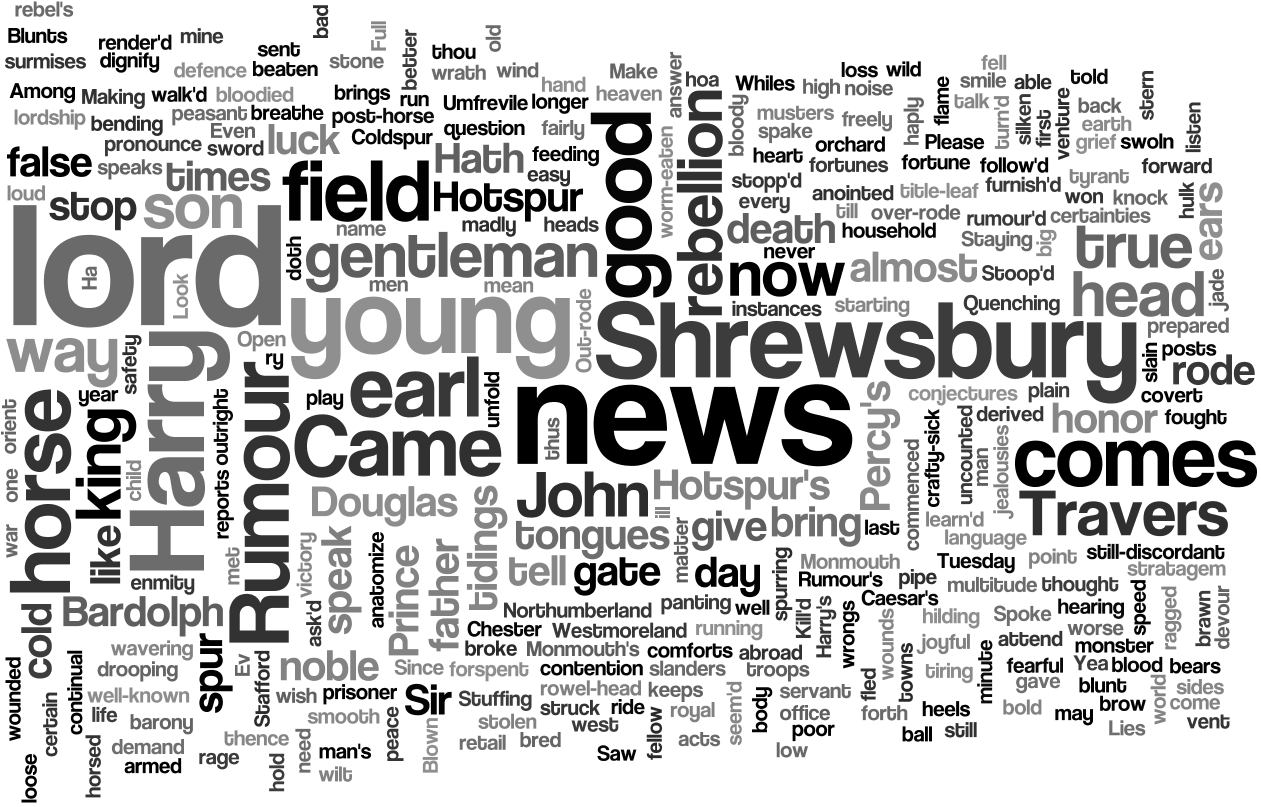 There, again, the largest word is “news”, and here, there is a higher frequency of repetition: “news” occurs seven times in the first 100 lines. The speaker for the first 40 lines is an anthropomorphic representation, not a historical character — and it makes sense that Rumour would have its mind on news, news, news. That fixation carries through the first scene as well, and many of the other repeated words reflect the characters’ concerns: Northumberland is waiting for word of what happened at Shrewsbury, of which Harry prevailed, of who will come home, of how the rebellion fared.

I asked Sarah what she thought would be the largest words for the first 100 lines of Henry IV, Part 1, and her guess was something like mine would have been: king, Henry/Harry, England. That would seem reasonable. Those are, after all, the major concerns of Shakespeare’s English histories. Take a look at the Wordles for the first 100 lines of Henry V and Richard III:

So what is it about the Henry IVs that makes them different? How is the energy different at the top of the play, how does that trickle through the following scenes, and, most importantly, what good can any of that do an actor? These are the questions we’re asking teachers and students to consider when they begin examining the language of Henry IV, Parts 1 and 2, and we hope it will lead to fruitful exploration.