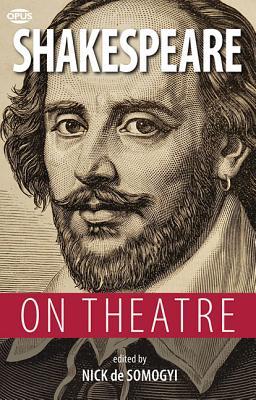 Shakespeare on Theatre is a good entry-level exploration of how Shakespeare’s plays comment on the conditions of Shakespeare’s theatrical world. From company structure to architecture, from prompters to casting, from prologues to epilogues, de Somogyi provides a compendium of Shakespeare’s commentaries on the theatre. What’s best about this, I think, is that de Somogyi shows that those references don’t only turn up in the expected places — the plays-within-plays in Hamlet, A Midsummer Night’s Dream, Love’s Labour’s Lost, the self-aware prologues of Henry V and Romeo and Juliet, the masque of The Tempest. Rather, the book also explores the subtler and smaller intra-theatrical instances. He reminds us of Cleopatra’s horror of watching a child actor “boy” her greatness on a rudimentary stage, of Macbeth’s metaphor of death as the ultimate exeunt omnes, of Margaret costuming the Duke of York with a paper crown.

De Somogyi also does well to expand his explorations and include  examples from other playwrights, many of them more overt in their self-referential moments, such as Ben Jonson’s various admonishments to the audience, or the appearance of actors Burbage, Condell, and Lowin as themselves at the top of Marston’s The Malcontent. The book includes snippets of poetry and of polemics both pro- and anti-theatrical, giving a broader view of the role of playhouse culture in 16th- and 17th-century London. Throughout, de Somogyi connects the conventions of Shakespeare’s theatrical world to examples of how those conditions have changed — or stayed similar — through to the modern age. It’s also pleasing that he typically off-sets terms like “metatheatrical” or “fourth wall” with quotation marks in recognition of the fact that those concepts, while common to theatre today, would have been alien to Shakespeare’s company and their audience.

Curiously, he seems less interested in that interplay when it comes to characters who “perform,” unless they do so explicitly. In The Taming of the Shrew, for example, he devotes considerable attention to the frame story involving Sly and the Players, but none at all to Petruchio’s various performances within the text. Nor does he consider the theatricality inherent in kings speaking to royal courts or to the commons. The deposition scene in Richard II, the fraught peacemaking of King John and King Philip, Richard III’s pretended reluctance to assume authority — these would all seem to be fruitful for what they have to say about the intertwining and overlapping of performing on the stage and performing in life (and about the blending and manipulation of on-stage and off-stage audiences), yet de Somogyi does not plumb them for their potential.

The overall effect of the book is to remind the audience that, as de Somogyi points out explicitly more than once, a playwriting was “a functional craft”. Shakespeare on Theatre goes a long way towards de-mystifying the idea of theatre as sacrosanct art. Modern culture tends to designate it as an emotional enterprise, but the early modern reality was much different. The book peels back the romantic notions and exposes the business of theatre — and demonstrates clearly that Shakespeare was a man who knew the practical aspects both on the production and the financial sides.

The book’s main flaw, in my opinion, is its freedom of conjecture. De Somogyi does not often enough qualify his pronouncements on Shakespeare’s life with the necessary disclaimers. I worry that someone approaching this book with a less solid grounding in the subject matter might take his narrative constructions as true biography. It’s even more concerning that this trend begins on the very first page of the introduction to the book. De Somogyi begins with the admirable opening statement that Shakespeare “was a working man of the theatre to his core,” but from there slides effortlessly into an imagined sequence of events — a lovely fantasy, of a “stage-struck boy” eventually “talent-spotted by a later touring troupe” who grew from an actor with “precociously impressive skills as a textual fixer” into the greatest playwright of the age. There are perhaps even some probabilities mixed in with the inventions, but they are still only conjectures, not evidenced facts. De Somogyi seems to assert things as truth that we cannot know for sure. More imaginative declarations of this type take place throughout the book, along with other generalizations about early modern theatre that I feel could have used some end-noted explanations.

With that caveat, however, I can generally recommend this book as a solid introduction to the interwoven dialogue between play, playing, and playhouses. Devoted scholars aren’t likely to find anything new here, but the book is accessibly written and a comfortable first step for someone who might then move on to deeper examinations like Gurr, Stern, or McDonald. It also might serve as an interesting source of monologue material for auditioning actors. Many of de Somogyi’s selections are the appropriate length, but a different variety than typical guides provide.