From the desk of Kim Newton

Every now and then, someone will ask me, “So, what do you do when you’re not at camp?”  As the ASC’s Director of College Prep Programs, I spend much of my summer at the helm of the ASC Theatre Camp, an intensive college-preparatory and performance program for teens.  When I am not at camp, I am preparing for camp; much of my preparation involves research for the upcoming summer sessions.  One of my ongoing tasks is to select plays that reflect clear artistic and academic goals for our campers.  Since 2007, the ASC Theatre Camp has produced at least one play each summer by a contemporary of Shakespeare in order to broaden our campers’ understanding of how early modern playwrights collaborated and of how Shakespeare found inspiration for his plays in the works of his colleagues and predecessors.

In 2013, we produced The Wild Goose Chase by John Fletcher and Volpone by Ben Jonson.  This year, I selected the anonymous play Fair Em to complement our other Session 1 play titles, Measure for Measure and The Tempest.  Session 2 will present All’s Well That Ends Well and Henry VI, Part Three. Fair Em might seem like the odd play out in this line-up.  Why would we choose to produce a relatively unknown play that has a dubious attribution to Shakespeare?  For starters, it seems that few people have given this delightful play a fair look in the last 400 years.  I venture to say that our camp production will be among the first public performances of Fair Em in the United States.  If that isn’t cool enough, then perhaps some exhilarating bibliographic details will spark a burning desire in you to check out this play for yourself: 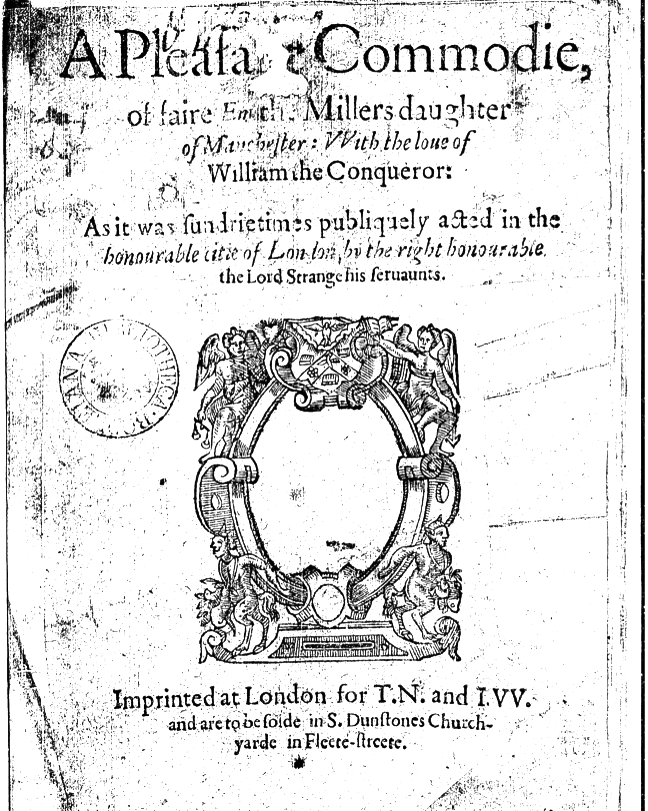 “A Pleasa[n]t Commodie, of faire Em th[e] Millers daughter of Manchester:With the loue of William the Conqueror: As it was sundrietimes publiquely acted in the honourable citie of London, by the righthonourable the Lord Strange his servants. Imprinted at London for T. N. and I. W. and are to be solde in S. Dunstones Church-yarde in Fleete-streete.”[1]

The plot derives in part from an Elizabethan ballad titled, “The Blind Beggar’s Daughter of Bednal-Green”.[2] Like many plays of the time, the title of Fair Em alludes to a popular subplot, that of the beautiful Em; however, William the Conqueror, the first Norman King of England, might claim the title as the play’s main protagonist.

William the Conqueror falls in love with a Danish princess, Blanch, after seeing her portrait.  He disguises himself as a knight called Sir Robert of Windsor and travels to the Danish court, only to reject the princess in favor of Mariana, a captive of the Danish King Zweno. Mariana is already betrothed to William’s friend, the Marques of Lubeck.  The ladies conspire to switch places during a rendezvous with William, and he takes the wrong girl back to England.  Meanwhile, the subplot follows Em – the daughter of a banished lord, both forced into hiding as millers. Her suitors are fumbling gentlemen, but she remains faithful to her true love, Manville. Em wards off her unwelcome suitors by feigning deafness and blindness. Manville abandons Em for another girl when he believes that she has lost her sight and hearing. In the end, the ladies stand their ground against the men who wronged them. William accepts his princess, and Manville loses both of his marriage prospects.

The play re-imagines William the Conqueror as a romantic playboy; such historic figures were often the subjects of early modern plays that refashioned familiar legends into new entertainments.

The Trouble with Ascribing Authorship

Scholars, including E. K. Chambers and W. W. Greg, date this quarto to c.1590, a time during which the Lord Strange’s Men gained much popularity and performed at court six times.[3]  The second quarto of the play comes to print in 1631. 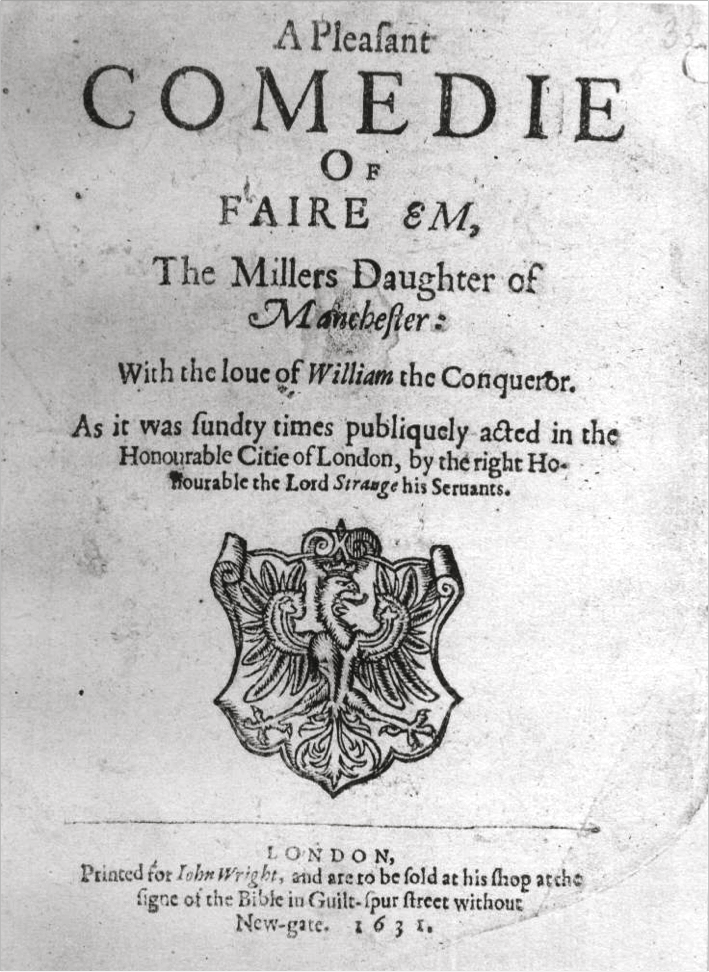 Both the undated and 1631 quartos of Fair Em lack a specific authorship attribution.  Scholars have attributed the play to Robert Wilson, Anthony Munday, and William Shakespeare.  E. K. Chambers relates the first ascription of the play to Shakespeare in The Elizabethan Stage [4]:

“Fair Em has been included in the Shakespeare Apocrypha on the strength of a volume formerly in the collection of Charles II, and then in that of Garrick, in which it was bound up with Mucedorus and The Merry Devil of Edmonton and lettered ‘Shakespeare, vol. i’.”

More recent investigation by Peter Kirwan reveals that Shakespeare, Vol. I was a special collection in King Charles I’s library; the volume also contained no fewer than five additional plays attributed to Shakespeare, among them, The Puritan, Thomas Lord Cromwell, The London Prodigal, 1 Sir John Oldcastle, and Love’s Labor’s Lost.[5]  This volume, Kirwan argues, evidences an already unstable view of the Shakespearean canon emerging within a decade of the publication of the First Folio in 1623.

An entry in Henslowe’s Diary dated 4 January 1593 indicates that the Earl of Sussex’s Men performed a play titled, “william the conkerer“.[6]  The play is now lost.  William the Conqueror may be the Fair Em of Strange’s Men’s earlier repertory, played under the original subtitle.[7], 8  Roslyn Knutson posits that Fair Em traveled with the players from Sussex’s Men to the Lord Chamberlain’s Men, which may explain why Fair Em was bound with other plays from their repertory.[8]  Inevitably, the fact that playwrights often wrote for more than one company, and that plays, like actors, shifted ownership when companies disbanded and reformed under new patrons complicates attributions of authorship to Fair Em.

Chambers notes a contemporary anecdote that also associates William Shakespeare with the character of William the Conqueror. John Manningham, a London barrister, recorded the following passage in 1601:

“Upon a time when Burbage played Richard III, there was a citizen grew so far in liking with him that before she went from the play she appointed him to come that night unto her by the name of Richard the Third. Shakespeare overhearing their conclusion went before, was entertained, and at his game ere Burbage came. Then message being brought that Richard the Third was at the door, Shakespeare caused return to be made that William the Conqueror was before Richard the Third.”[9]

The anecdote, apart from playing on William’s name, may also suggest that Shakespeare may have played a role in Fair Em some time before or concurrent with Richard Burbage’s appearance in Richard III, a fixture in the early repertory of the Lord Chamberlain’s Men.8

What do all of these historical tidbits add up to? We cannot know for certain whether or not Shakespeare had a hand, or a played a role, in the first appearance of Fair Em on the early modern English stage. We can, however, cite Fair Em as an example of the complexity of deciphering play authorship and of play ownership between theatrical playing companies.

Although Chambers and other scholars reject Shakespeare as the author of Fair Em, several of Shakespeare’s known works, including The Tempest, Measure for Measure, and All’s Well That Ends Well, share common plot elements with the play: the story of a father and daughter in exile, the inappropriate exploits of a ruler in disguise, and a lover’s abandonment of his betrothed. While Shakespeare may not have written Fair Em, the play may have influenced his writing later in his career.  Despite its rarity and received criticism, Fair Em offers a delightful glimpse into the early repertory of the Lord Strange’s Men and possibly to Shakespeare’s earliest connections with the London playing companies.

Please join us for the ASC Theatre Camp play festivals at the Blackfriars Playhouse this summer.  Session 1 presents Measure for Measure, The Tempest, and Fair Em on July 13. Come back on August 10 to see the Session 2 productions of All’s Well That Ends Well and Henry VI, Part 3.