Since starting work with the ASC in June of 2010, I’ve created Study Guides covering 19 of Shakespeare’s plays, along with our From Class to Cast guide to production. Each year’s new Study Guides typically cover the shows which are our Student Matinees at the Blackfriars Playhouse. These are usually major curriculum shows such as Romeo and Juliet or Hamlet, though not always, as my guide for The Two Gentlemen of Verona can attest. This year, however, all of our matinee shows are plays I’ve already created Study Guides for (Macbeth and The Comedy of Errors in the Fall, The Taming of the Shrew in the Actors’ Renaissance Season, and Hamlet and Much Ado about Nothing in the Spring). This has given me a few different wonderful opportunities. 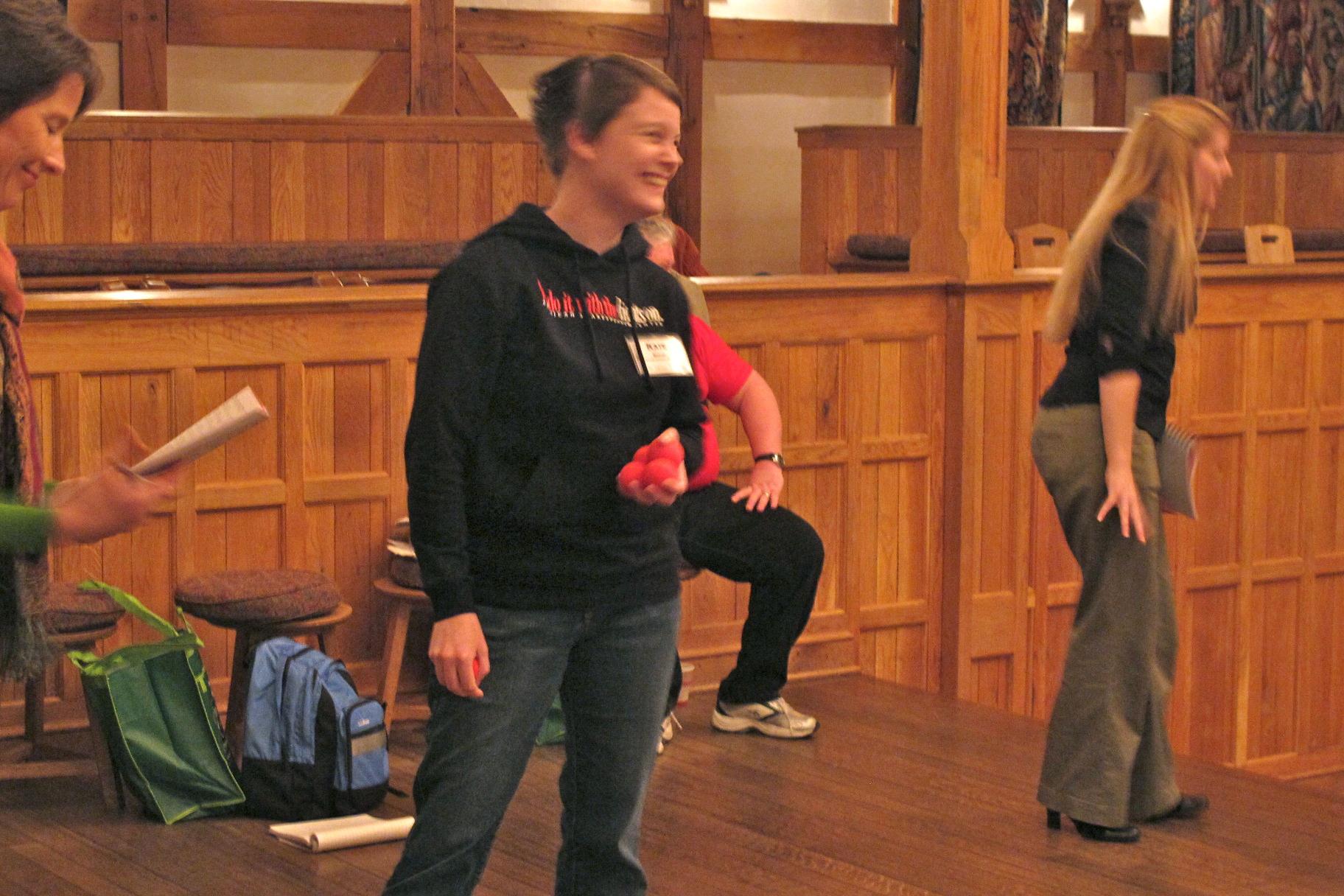 First, I’m getting a chance to do a Version 2.0 on each of those guides. This process has been a revelation to me, since it’s a tangible representation of how my pedagogical thoughts have shifted and expanded over the past four years. Some of that has come from observation, some from things I’ve learned at conferences (our own Blackfriars Conference or others), and some of it has been simple trial and error. Working with teachers in our seminars has helped me see which activities take off like shining stars and which need a little extra boost to hit maximum efficacy. In the guide for The Comedy of Errors, for example, I’ve updated the section on the rhetorical device of stichomythia based on an activity that really fired everyone’s imaginations in a later year, when we were working in Much Ado about Nothing (see the picture at right — and if you’re curious what that’s about, join us Oct 3rd-5th for the Fall Seminar!).

Since updating the guides doesn’t take as long as writing one from scratch, however, it also frees me up to expand our offerings in new ways. By the Spring, I’ll have a Marlowe guide to add to our Shakespearean shelf, focusing mostly on Doctor Faustus, to help teachers who look at these two early modern heavyweights in conjunction with each other. I’m eager to find out where the similarities and differences will lie in building a guide for Kit instead of Will.

I’m also starting work on something in an entirely new format: a scansion workbook. This is in early stages yet, but I’m excited to develop it. I’m hoping to create a hands-on, step-by-step guide to the mechanics of metrics and their application for actors. This guide was partly inspired by watching our actors in their tablework rehearsals this summer. Since we so strongly believe this is a tool that all students and actors of Shakespeare should have at their disposal, it makes sense to add a scansion-focused workbook to the resources we offer. If all goes well with that, next year I’ll build a similar workbook for rhetoric.

We’re also looking into ways to build more multimedia into our educational resources. Over the next year, the Education Department hopes to produce a series of short videos sharing exciting discoveries, tips and tricks, and demonstrations of activities.

One of the best things about Shakespeare, I think, is that you can never stop learning from the plays. Dr. Ralph has been teaching for forty years, and I still get to watch him make brand-new discoveries in the middle of workshops, when some nuance of rhetoric or staging strikes him in a way he’s never thought of before. It’s that energy that drives me when I’m building and rebuilding these Study Guides: the idea that however many discoveries I make, however many activities I create, I’ll never be done. There’s always something else to explore — and that’s the energy I most want to pass on to classrooms.