Recently, as I prepared to write my paper for the upcoming SAA seminar Playhouses and Other Early Modern Venues, I pulled out the binder of material I collected at one of my first Shakespeare-specific ventures, The Rose Playhouse Institute at Shakespeare and Company. When, as a second year teacher, I won the NEH award to study for the summer with the team of Educators in Lenox, Massachusetts, my most vivid Shakespeare experiences were all from high school, community theatre, and my own attempt to direct A Midsummer Night’s Dream with my high school students in Texas (let’s just say the special effects were brilliant–trees flew!).  At that time and until I started graduate school, this binder was my biggest link to Shakespeare; in it, I placed everything I thought I needed to direct and to teach Shakespeare. Opening it yesterday took me on a journey back to a time when teaching Shakespeare was harder than it needed to be and I felt like I was winging it constantly.  Don’t get me wrong; the folks at Shakespeare & Company gave us a lot of good information. I learned so much about voice, a lot about taking the text out of context (to help dissolve some fear — my feelings about that I will get to shortly), Elizabethan dance steps, and lessons on tying today’s theatrical practices to Shakespeare (given circumstances, motivation, all the Stanislavsky and Method stuff).  What I didn’t find is anything that cracked the plays, and Shakespeare’s genius, open for me.

Like most high school teachers, I began teaching Shakespeare after experiencing it only in high school classrooms in which we sat and read every. single. word. of the play aloud. Now, I loved that. But I know now that that method of teaching will not work for every student and does a disservice to the author and to the rich material these works contain. Material to mine, figure, construe, and, eventually, apply.  Methods that we want students using when they graduate and pursue further study, careers, and life in general. By the time I reached the status of classroom teacher, however, I had never been introduced to them. Not in high school, not in college, not in community theatre, and not, sadly, at my Institute. I found the tools that help to expand the text in the professional practice at the American Shakespeare Center and in the Mary Baldwin College Shakespeare and Performance Program, both places where we work hard to introduce them to every student and every teacher who crosses our threshold.

My time at the Rose Playhouse Institute was valuable in many ways. It helped shape me as a person; it gave me confidence at a time when I sorely needed it; it supplied me with life-long friendships that I treasure. What it did not teach me how to do is to plumb Shakespeare for meaning.  Instead, sort of like with the recent TEDed video, Why Shakespeare loved Iambic Pentameter, I got a false sense that I knew stuff that mattered. My kids could do text lay-ups, create a sculpture garden of Shakespeare moments, but they couldn’t dig down into a passage, they couldn’t wrestle with the ins and outs of why it mattered. It’s not that the stuff that matters is so difficult, or so hard to teach; it’s that we don’t give it to our future (and present) teachers so that their students can experience the joy of discovering Shakespeare themselves.

In most “on your feet” or “performance-based classroom activities,” the material dodges the matter. It steers clear of looking at too much text (might scare the kids), at text in context (we don’t perform like that anymore), at using the tools Shakespeare’s actors used (they are dead, so they must not be very good).  When, however, we have the ability to study plays across the canon with techniques that take very little time to grasp but that astronomically expand the possibilities for students’ ownership of the text, we are opening the world — and not just the world of just of Shakespeare and literature — to them.  Through this, we say to them: you are good enough, smart enough, and talented enough to get and play with this revered text.

As an example, we worked on The Taming of the Shrew the last weekend in January with teachers from several states and disciplines. Cass looked at rhetoric (I know, surprise!) and early modern courtship as it relates to the play; I, ostensibly, looked at textual transmission (how the play changes from edition to edition) and acting in the play within the play. I say “ostensibly” because I ended up looking at scansion, rhetoric, second person pronouns, and stage directions. Why? Because once you see those things, you can’t un-see them.  Or, to say it another way, once you know their value, scenes and entire plays take on a depth of possibility that students who don’t know them can’t see.  It doesn’t take long to say de-DUM 5 times, or to walk around like a pirate (why a pirate? are we really encountering that many pirates that we use that as our “easy way” into Iambic Pentameter? I digress) but it can make a world of difference in looking at a scene if students know that actors use it as a clue to character and understanding.  Cass has already shared a textual variants activity with you from our study guide, but I would like to dig into that beast a little deeper and show you the things we couldn’t help but talk about last weekend. 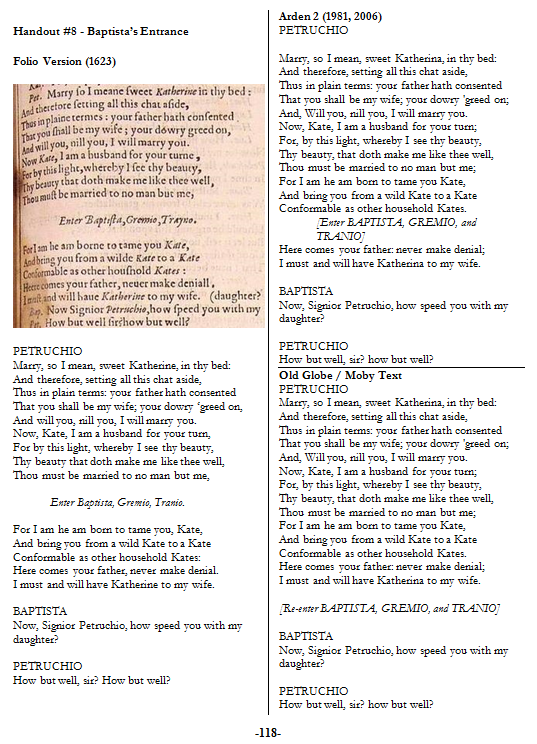 At right is the page showing different versions editors made of the same passage in 2.1 (by the way, I pulled 9 editions to consider the stage directions in 4.1 and found that every single one constructed them differently — thus painting a different Petruchio). Look at the first 14 lines Petruchio speaks in this passage — ha! another thought, this is 14 lines, the length of a sonnet, but, I digress (again).

Marry so I mean sweet Katherine in thy bed:

And therefore setting all this chat aside

that you shall be my wife: your dowry greed on,

And will you, nill you, I will marry you.

Now Kate, I am a husband for your turn,

For by this light, whereby I see thy beauty,

Thy beauty that doth make me like thee well,

Thou will be married to no man but me.

For I am he am born to tame you Kate

And bring you from a wild Kate to a Kate

Conformable as other household Kates:

I must and will have Katharina to my wife.

As we discovered in last Friday’s teacher seminar session, this passage’s stress patterns and use of the informal second person pronoun lends some weight to the argument for the stage direction remaining where the folio places it, and thus, not moving it as later editions do (though, I am pleased to acknowledge that the Arden 3, edited by Barbara Hodgdon, leaves it and other important stage directions from the Folio, in 4.1 for instance, in tact).  It is somewhat unusual, and always revealing for an actor/student, when a pronoun falls in a stressed place. Here, we see four to six pronouns in the stressed position in just 14 lines. Moreover, the nature of the pronouns changes from the informal to the formal to the informal and, finally, back again (the second return to formal coming when the Folio signals the return of Kate’s father).  After we noted all of these things in the group (and pulled our collective hair out with the scansion of the first line–trochee, iamb, iamb, trochee (elision), weird feminine ending? or, entirely trochaic with a catalectic final foot?), we played with it. We made some big choices with the pronoun shifts, trying distance in the formal uses and closer proximity in the informal. We tried being really formal, with Petruchio kneeling the first time he uses the formal pronouns and then transitioning into a more intimate exchange in the informal.

In short, we looked at the text for what clues it could provide. We considered easily identifiable traits like beat and pronouns to create playing choices. We didn’t give just one line; we didn’t gloss over the challenges of the scene. We talked about playing possibilities. We gave the text back to the students (teachers in this case) to make of it what they wanted to. Returning the authority to tackle text is how we roll, and we do it by showing all of the details that are too often not taught but make the text accessible.

PS: For an in-depth guide to exploring those possibilities in the classroom, join us on August 7th for the Summer Teacher Seminar: Shakespeare’s Toolbox.