In Study Guides created or revised since Spring 2012, I’ve removed the boring-if-classic Shakespeare head that we used to have as the frontispiece and replaced it with something more visually interesting and more directly related to our activities: a word cloud of the full play. As I’ve discussed before, because words appear larger when they appear in the text more times, word clouds can be a great way to mine the text for information about vocabulary, repeated ideas, and the focus of certain scenes, so it’s great to open the Study Guides with a teaser for that tool.

I pick a shape that somehow speaks to the play itself and I dump the full text into Tagxedo. I like Tagxedo for these because you have a lot more artistic flexibility than you do on Wordle.net. You can choose from a wide variety of fonts, upload your own image to serve as the silhouette, toy around with colors, and generally customize the image to your preferred specifications. (Wordle.net, however, gives you more precise information about the frequency of the words, and sometimes can create a crisper image — each has its benefits). Here are a few examples: 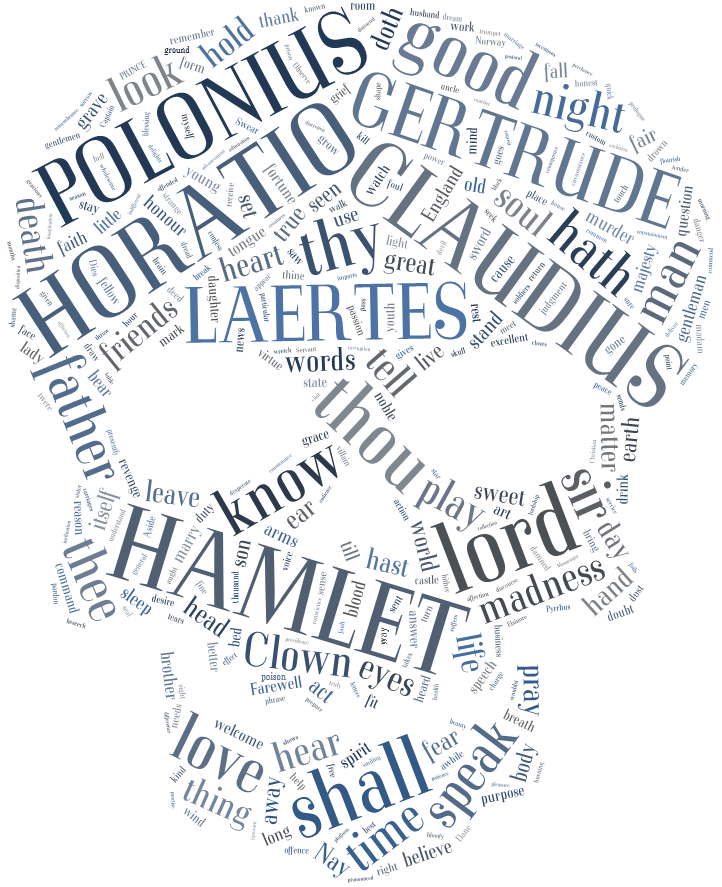 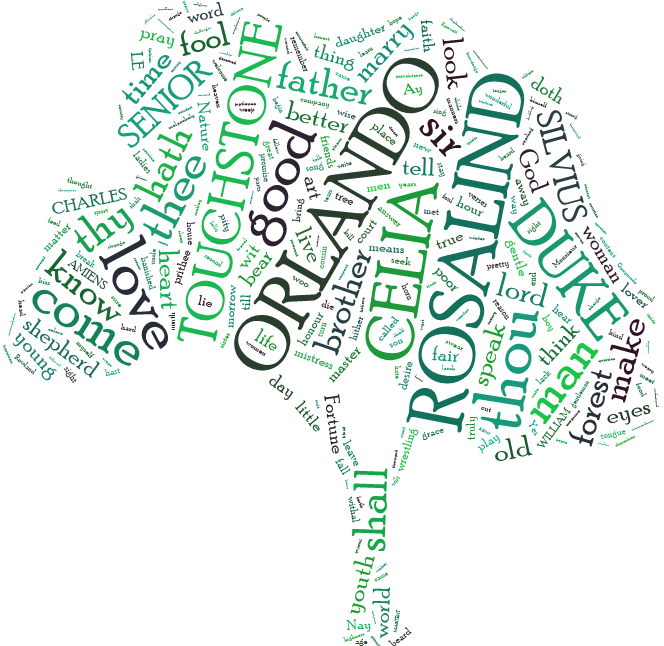 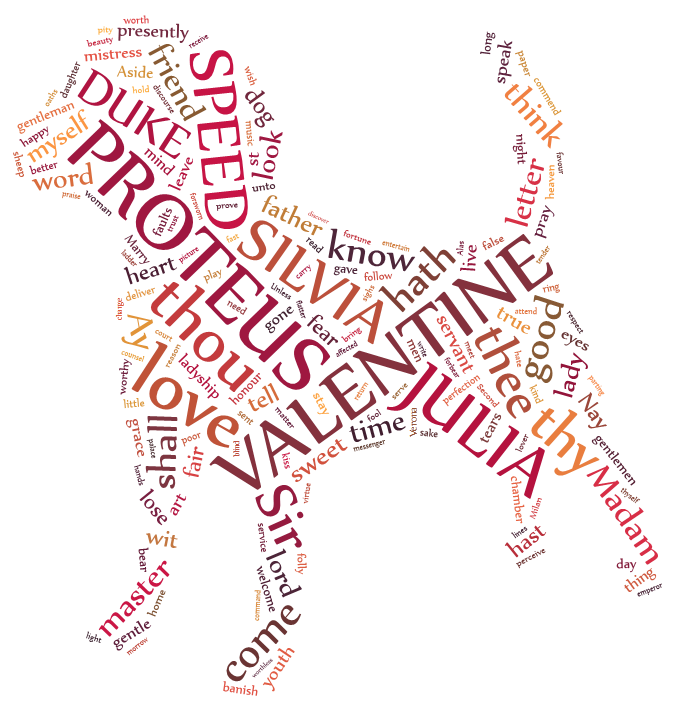 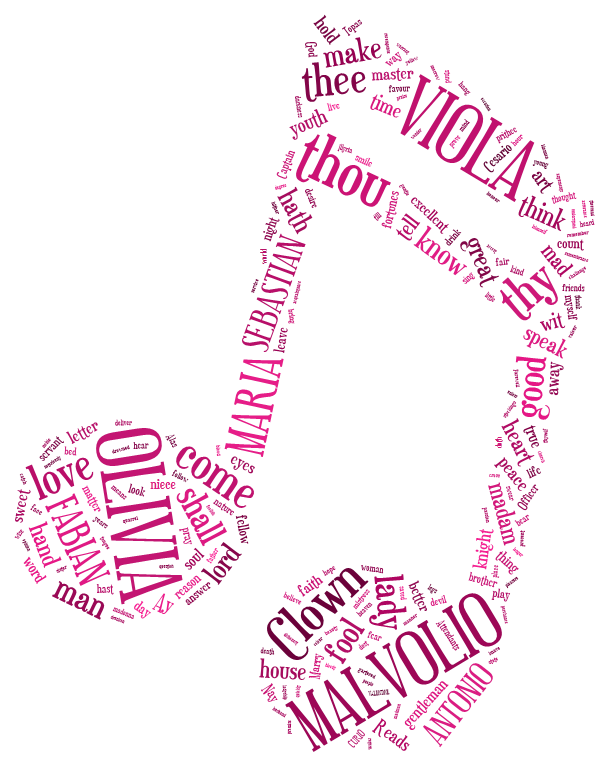 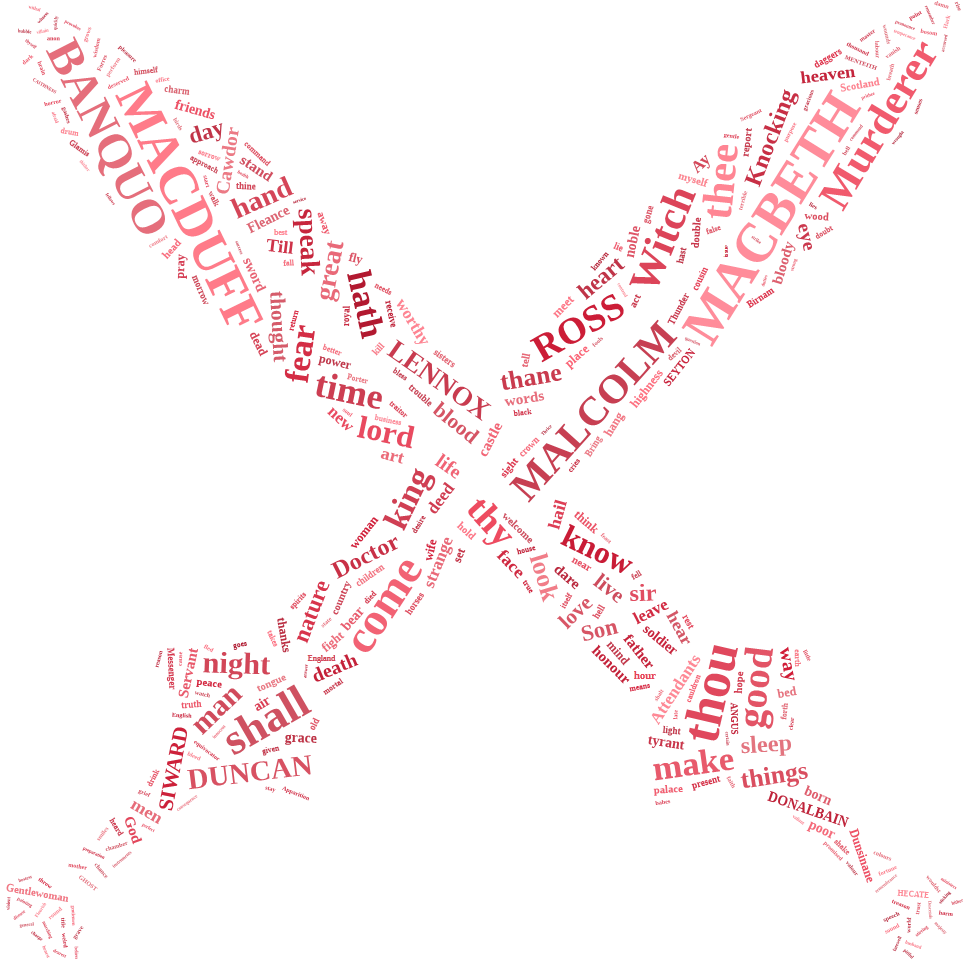 Now, unlike the clouds I create for the first 100 lines, these frontispiece clouds retain stage directions and speech prefixes, partly, I confess, because it would be too much trouble to edit them all out, but partly because it’s pretty neat to see which characters speak the most (or, at least, the most times, if not necessarily the most lines). Ross’s prominence in Macbeth is pretty interesting, and Celia speaks more than you might initially guess, considering how conspicuously silent she is during a few key scenes between Rosalind/Ganymede and Orlando.

This week, I’ve started revising the Much Ado about Nothing Study Guide from ARS 2012 — one of the last ones to go up before I started creating the new frontispieces — so I had to create a new cloud for it. There’s always a bit of finessing to do — picking the right shape, the right font, playing around with the maximum word count, adjusting the weight that frequencies are given, so that the final image is both meaningful and aesthetically pleasing. What struck me on this one, though, was Hero’s name: 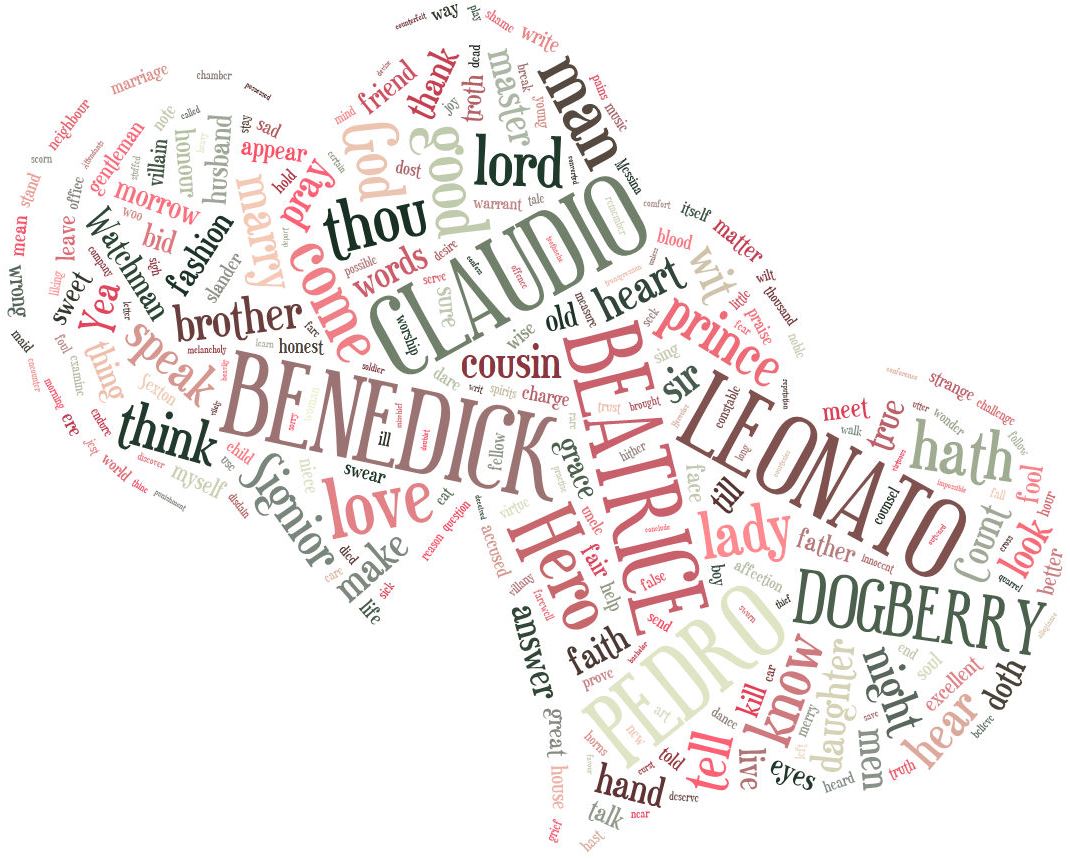 Hero’s name, there below Benedick and Beatrice, appears not in uppercase but in regular type. (The same is true for “Caesar” f you look back up at the Julius Caesar Wordle, above). The cloud generator chooses to capitalize or not based on the frequently of the word — it’s why “prince” is all lowercase but “God” isn’t. All the speech prefixes are in capital letters in the text I pull from for this purpose, so character names almost always appear entirely in uppercase. Not so with Hero, though. Her name is spoken more times in the play than she actually speaks, and so it isn’t in caps.

This raises what I think is a pretty interesting question about the play: What does it mean to be more talked about than talking? How much agency does Hero get to have? Just being aware of the dichotomy between speaking and being spoken of might help a production and an actor make important choices — and a word cloud can help bring that concept from the abstract into concrete representation.