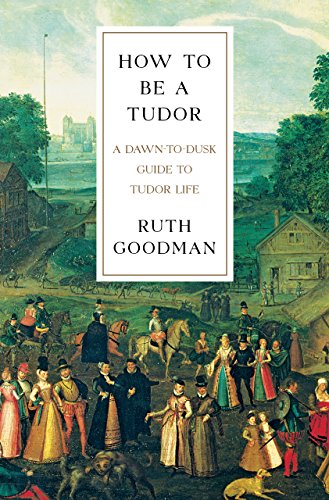 What would Shakespeare have eaten, drunk, slept on, dressed in, and smelled like? When would he have broken his fast or eaten dinner? How was his life different in London than when he was living in Stratford-upon-Avon? How did morality, religion, sex, and money affect his interactions with other people? If you’ve ever wondered about the real daily life of the bulk of the population in the Tudor era, then How to Be a Tudor is the book for you.

The book is arranged to take you, more or less, through an average Tudor day, nearly hour-by-hour. Author Ruth Goodman makes sure that you get a good look at both the uppermost and lowest extremes of society, however, she focuses the bulk of her attention on what a day was like for a farmer or an artisan. There are differences between town and country, men and women, young and old, religious and secular — and Goodman touches on all of them, while still paying attention to the overall worldviews that shape them all.

While the format of the book is a generally sensible way to introduce the reader to different aspects of Tudor life, sometimes her information loops in upon itself. There are some redundancies that probably could have been cleaned up, and a few points where a single topic gets disjointed over multiple chapters (particularly the matter of clothing). These are places where it feels like the book’s structure is working against rather than with the writer — but it’s a small detraction, overall.

The great advantage that Goodman has is that her knowledge is not only scholastic, but practical. To the textual authorities of extant written sources, such as household accounts, ecclesiastical records, and early modern household-advice writers such as the prolific Gervase Markham, Goodman adds not only material culture but her own lived experience. As a re-enactor, a museum consultant, and someone involved with numerous documentaries on the Tudor era, Goodman seriously knows whereof she writes: she has lived the Tudor lifestyle as closely as it is possible to do in the modern age.

One of my favorite tidbits involved early modern cleansing practices. We often hear that Tudor folk must have stank to high heaven because they rarely bathed. What Goodman elucidates is that, much like the ancient Romans with their oil-scraping practices, the Tudors simply had their own way of keeping clean and BO-free. It all has to do with linen. Rubbing the body down with a clean sheet of linen every day, plus wearing fresh linen garments, seems to have adequately combated dirt and odor alike. Goodman has tried this herself and states that there was no appreciable scent difference from our modern method of near-daily showers.

This is just one of the fascinating insights that the book offers. You can also learn how bedding changed from the early to the late part of the period, how to dress yourself in Tudor fashion, how to brew your own ale, how to conduct yourself at an alehouse, and even how to plough a field.

What does this book offer for theatre practitioners? As Goodman herself points out, an understanding of early modern life can help you understand early modern jokes:

As people who have spent many years deep in experiments recreating Tudor life, who cook the food, make the clothes, and drink the beer, my friends, family, and I have, without any conscious effort or thought, acquired a fairly Tudor vocabulary. I am regularly surprised when people treat words that I consider perfectly normal as arcane and mysterious. … When my friends and I go to the Globe to see a performance, it is very obvious that we are laughing at least twice as often as the rest of the audience, and not just at the slapstick elements. Shakespeare really is very funny.

An understanding of the reality behind the jokes can help actors help the audience members who haven’t spent their lives studying these things. It can help costume designers translate the clothing-related humor (of which there is quite a bit). It can help directors shape and hone the presentation. And all of that gets you a more satisfying performance.

Overall, this book is quite readable and includes some surprises even for readers who already know the era fairly well. It’s solid social history with enough interesting details to supply a well-painted picture, but for the reader who wants to know more, Goodman also supplies an extensive bibliography of both primary and secondary sources. I can cheerfully recommend this to Shakespeare enthusiasts and armchair historians alike.