I feel it prudent to begin this post with: I am not a mathematician. I’m a writer. We try to keep me away from numbers. Almost everything I know about statistical analysis, I learned from Mythbusters. I am, quite explicitly, in charge of words for ASC Education.

But sometimes, what you need is data.

No, not that Data.

I’ve been working on a Study Guide for the Henry VI plays, and when pulling text for an activity on audience contact, I noticed… there are almost no soliloquies in 1 Henry VI. Almost no moments where the actor is alone with the audience. Huh. So, I tweeted about it. Then ASC actor Tim Sailer let me know that, from what he’d seen of Coriolanus, there were almost none in there, either.

Weird. Two relatively little-performed, and dare I say? little-loved plays, both with such low quotient of soliloquies. This got me wondering: is there a pattern to that? Are plays with more soliloquies generally better-received? My instinct said yes — but my instincts have been wrong before. I needed data to find out for sure.

Methodology
Diving into this, I had to do two things: tally up the soliloquies per play and find out if my perception of the plays’ popularity was close to the mark.

For my purposes of counting up lines, I had to define precisely what I meant by “a soliloquy”, and what I arrived at was this: an actor alone with the audience, neither responding to nor being responded to by any other on-stage/in-scene character. So, if you’re on-stage with a corpse or a sleeping body, you can soliloquize — so long as you’re not addressing said corpse or sleeper. What I’m interested in is that dynamic between actor and audience, where only one performer is actively influencing the audience — so I place no litmus test of content upon it. I am as willing to take expository soliloquies as emotional ones, and indeed, they often overlap. I did make note of what kind of soliloquy each was (with full admission that this is a subjective judgment on my part): functional/expository, introspective/emotional, or comic/musical. This percentage of the whole, I refer to henceforth as the “soliloquotient”. (It’s also worth noting that I was going off of the Norton Shakespeare’s versions of the play, so that involves quarto/Folio conflation in some instances. I recognize that there might be valuable differences to discover there, but, alas, I could only devote but so much time to this particular bee in my bonnet.)

As for determining play popularity, 281 individuals were kind enough to answer a survey on the subject. Admittedly, this sample set is drawn from people within one to three degrees of separation from me and the ASC, so it’s naturally people more inclined to like Shakespeare than, perhaps, the general populace. But I was actually okay with that. Because I wanted to compare more popular to less popular plays, the opinions of people who had only seen, say, Romeo and Juliet or A Midsummer Night’s Dream would be less valuable to me.

So what did I find out?

Broadly? My assumption was totally wrong! The data utterly cut the knees out from my hypothesis, but that’s okay. I still learned a lot. As we so often tell students in our workshops, sometimes you have to be wrong in order to figure out something right — and this rabbit hole definitely lead me to some interesting observations.

The Soliloquotient
To start with, my perceptions of which plays were the most soliloquy-heavy were not spot-on. Richard III and Much Ado about Nothing were both lower than I expected; The Two Gentlemen of Verona and Timon of Athens were significantly higher. A few of the oddities are almost entirely due to Choruses; if I altered my definition of a soliloquy to remove those (thus basing soliloquies only on characters within the play), then Pericles drops from a chart-topping 13.71% to a mere 1.63%; even Henry V drops from 10.33% to 3.27%, leaving the Boy’s short soliloquy and Henry’s “ceremony” speech as almost the only character-driven soliloquies in the play. Romeo and Juliet, though, suffers a much smaller drop — from 7.69% down to 6.75%. But, for the sake of number-crunching, we’ll stick with my initial definition and keep in the Choruses.

The average soliloquotient is 4.82% per play — though the median is lower, 3.95%. A standard deviation of 2.87% indicates that the bulk of the plays fall between 1.08% and 6.82%. Only one play, Coriolanus, falls below that 1.08% mark, but 9 fall above 6.82%. Macbeth, Cymbeline, 3 Henry VI, Romeo and Juliet, and Timon of Athens are all between one and two standard deviations out (between 6.82% and 9.69%), while Henry V, The Two Gentlemen of Verona, The Two Noble Kinsmen, and Pericles are all above two standard deviations out (greater than 9.69% soliloquies). Here’s a histogram to visualize the spread of soliloquotients across the plays: 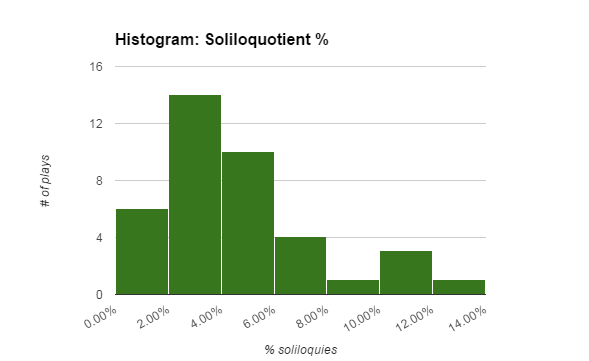 Looking just at that data, it would seem that a high proportion of soliloquies is at least as likely to make a play hated as loved. But let’s dig further:

Popularity
My instincts about the plays’ popularity were largely borne out. Twelfth Night, Much Ado about Nothing, Hamlet, and Macbeth top the charts whether I took the simple average of reported enjoyment (on a scale of 1-5, where 1 was “I loathe this play” and 5 was “I love this play”) or whether I looked at the percentage of respondents who rated the play “above the fold” — ie, a 4 or a 5. Charts of both are below, and while they’re not wildly different, to measure a play’s loveability, I prefer the “above the fold” version (and its partner, “below the fold”, those plays with a significant number of respondents rating a play “dislike” or “loathe”), both because it smooths out the variance in how many people have seen which plays and because it distinguishes between plays that are really liked or loathed versus those which people just feel neutral about. 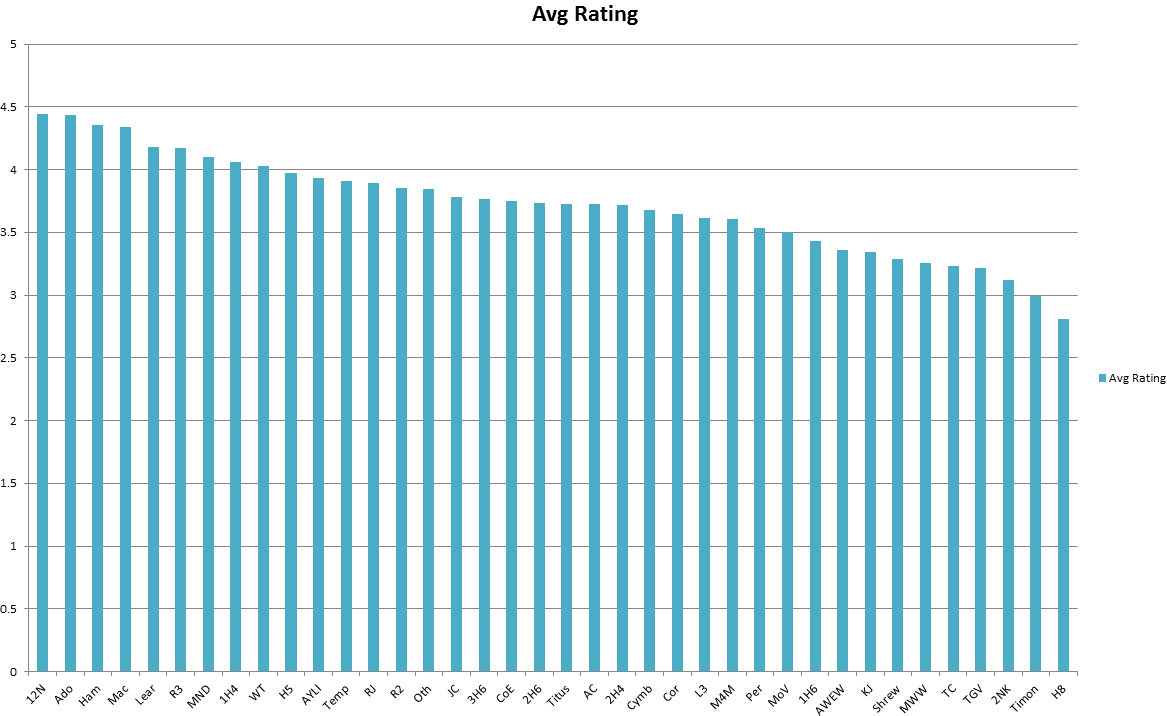 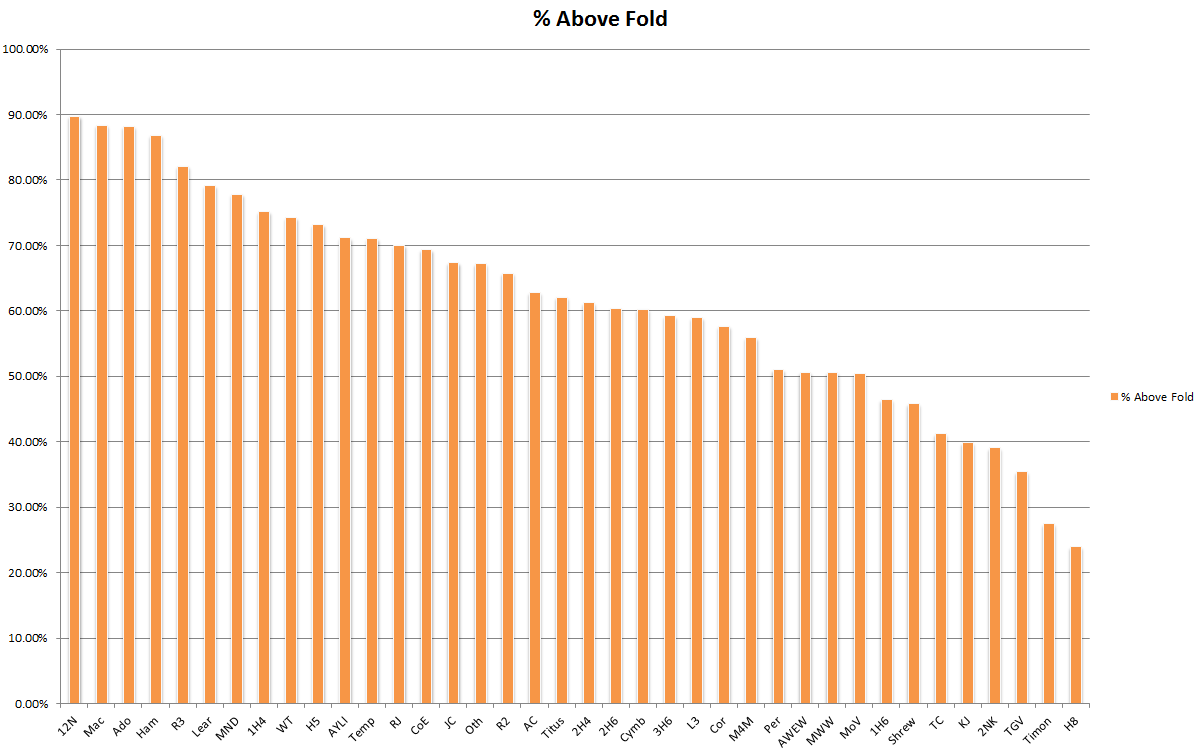 Fully 22 plays land with more than 60% of respondents “above the fold”. Most of those are fairly expected: Richard III, Lear, A Midsummer Night’s Dream, 1 Henry IV, The Winter’s Tale, and Henry V round out our top ten, and of those, all but Winter and Henry V get more than 75% in the top two boxes. I’m not wholly surprised that Romeo and Juliet and Julius Caesar don’t get quite as much enthusiasm, considering those are often plays served as tonics to students (and plays that are, I believe, pretty easy to screw up), but they still come in at a respectable 70% and 67% above the fold.

The most-hated plays are pretty expected, too. Because this was a sample of Shakespeare enthusiasts, only a few plays had more than 15% of responses in the bottom two boxes: Merchant of Venice (17.24% dislike or loathe), The Two Gentlemen of Verona (18.86%), All’s Well That Ends Well (21.43%), The Taming of the Shrew (22.14%), Troilus and Cressida (22.3%), The Two Noble Kinsmen (22.86%), The Merry Wives of Windsor (27.91%), Timon of Athens (29.01%), and Henry VIII (30.58%). Some very early plays and some very late (and co-authored) ones, as well as a smattering of those with significant issues for modern feminists. Merry Wives is the only real surprise there, and I’d be curious to know what about that comedy falls so flat for many viewers.

A rating of 3 marked a play as “neutral or mixed feelings” — and King John, The Two Gentlemen of Verona, and Henry VIII top that list, all with over 45% in the middle box. I find it interesting that some of the most hated plays are also the ones with the most mixed feelings. The same is not true of the best-loved: the top six there are the lowest six in the neutral category.

Revelations
But there are a few fun surprises. What’s Richard II doing in a relatively high position when I look at the “above the fold” data? That play isn’t what we’d call “popular” — it’s one of the least-frequently-seen in this survey. But people who do see it? Seem to love it. It comes in at a respectable 65.76% above the fold, and only 8.15% below.And that makes a kind of sense, particularly when you remember that Shakespeare wrote it the same year he wrote A Midsummer Night’s Dream and Romeo and Juliet. Something in the language seems to resonate with those who get exposed to it on stage.

Richard II is also fascinating for what its soliloquotient reveals about the play. It’s very, very light on soliloquies — until you hit Act 5 and Richard’s massive 77-line beast of a heart-to-heart with the audience. Looking at it as data, not just as scenes, helped me to realize that until that point, Richard is never alone. Literally never. He is a king who always has someone on hand. His entire life is a public performance — and then it’s all stripped away.

Once I noticed that trend, I started finding similar patterns in some other plays. Antony and Cleopatra are never alone together. Cleopatra is never alone at all. Timon starts out never alone, like Richard, but then spends a significantly larger portion of his play in isolation. Hal/Henry’s only soliloquies of any length are “I know you all” in 1 Henry IV and then “general ceremony” in Henry V; Falstaff gets the bulk of the audience’s time in the Henry IV plays. Hamlet starts off, as you would think, with a lot of time with the audience — but hands that privilege off to Claudius for most of acts three and four, and no one soliloquizes in act five. Twelfth Night, All’s Well That Ends Well, and The Two Noble Kinsmen are the only plays where the women soliloquize more than the men (though Helena and Hermia put in a good showing in Midsummer — Puck and Bottom just barely edge them out, and Juliet would win Romeo and Juliet if you take out the Choruses; she certainly has more time alone with the audience than Romeo does).

Conclusions
So, all in all, this data gave me a lot of fun information to turn over in my brain, and I expect I’ll return to some of it in future ponderings; but, it turns out, there is really no correlation between soliloquotient and a play’s likeability. Note the following charts: 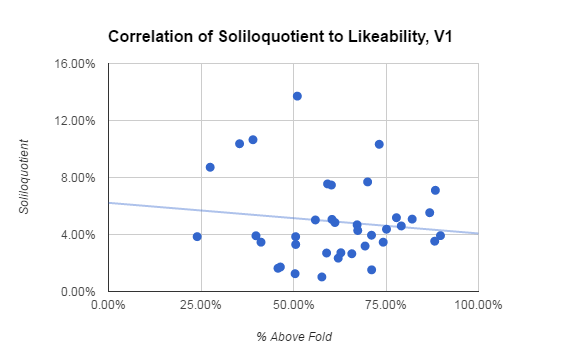 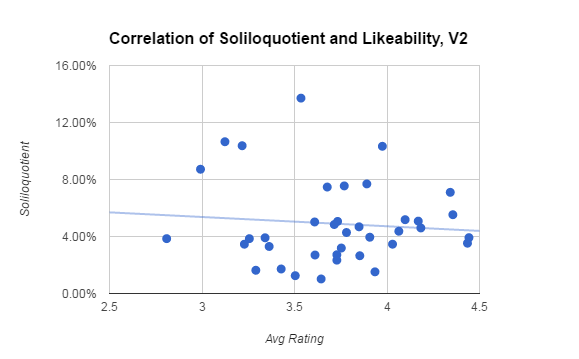 If anything, a higher soliloquotient — those over 2 standard deviations away from the norm — seems to hurt a play far more than help it. Even creating secondary versions without Choruses and other non-character commentaries didn’t change much — the line would tilt up a very little, but nothing significant.

There does seem to be something of a “sweet spot”, though, as you can see from the clustering: the most-loved plays all have a soliloquotient between 3.5% and 7%. Plays above or below that don’t make the mark — but that’s not really determinant evidence, since not all plays within that sweet spot do land in the top tier of popularity and love-ability.

If I were to continue this experiment, I’d try to focus it more narrowly — specifically, to find out if people are more favorably inclined towards shows they’ve seen in the Blackfriars Playhouse or another theatre with universal lighting and direct audience contact. Take Timon of Athens, for example: this is among the least-loved plays in the survey, but anecdotally, I know that people who saw it on our stage with Rene Thornton Jr. in the title role absolutely loved it. Can one strong performance change an audience member’s outlook on an entire play? Does the soliloquotient matter more in a theatre with universal lighting?

My instinct and hypothesis on both is yes — and perhaps someday I’ll have the data to back that up!