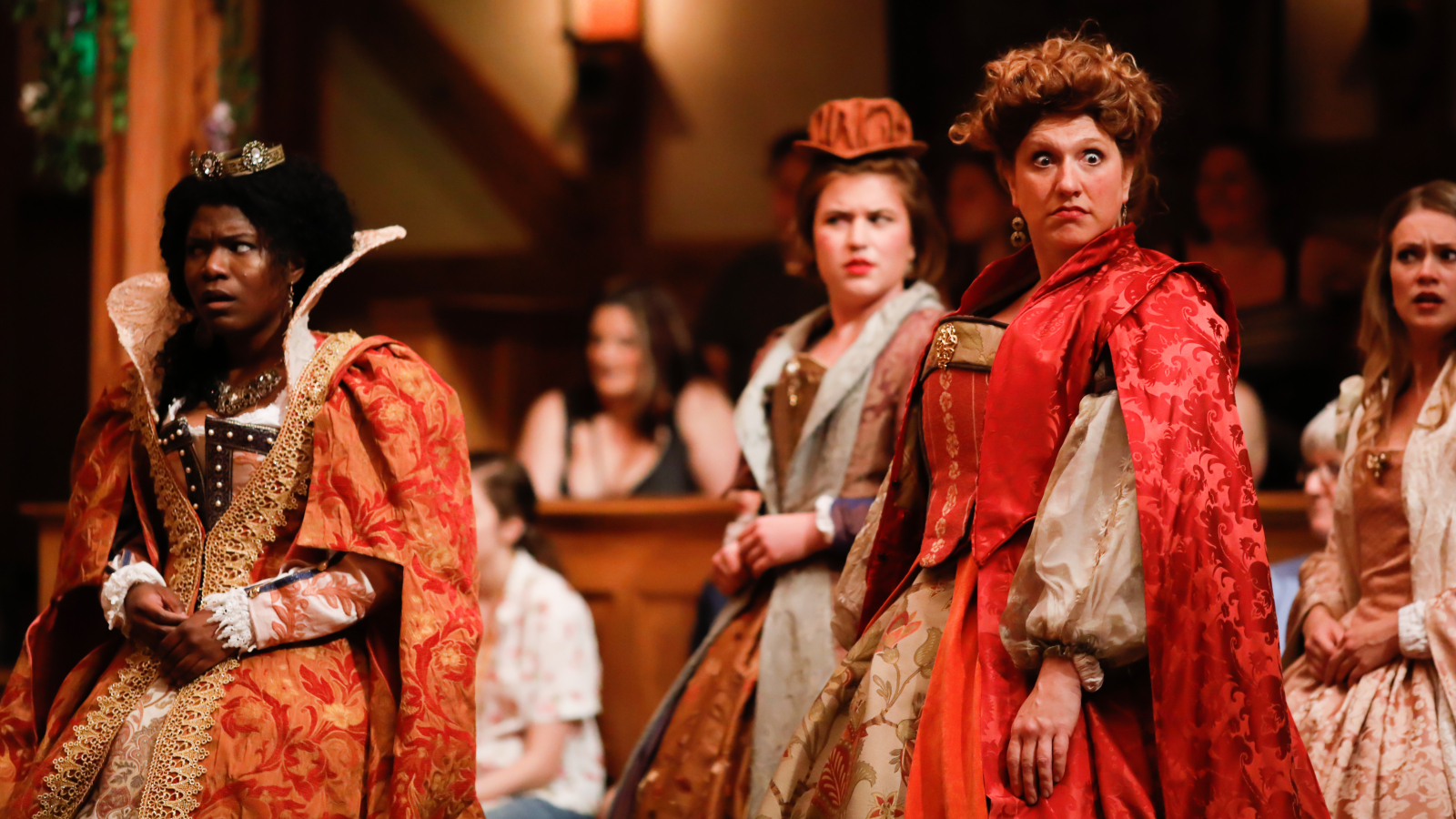 (I also firmly align with Henry (Lancaster). And Rutland (York). And Warwick (the Kingmaker). And Margaret (Lancaster). And Richard (York). And Elizabeth (York). And most especially with some specific Fathers and Sons in this play who show up in 2.5—Henry is the one who’s most aligned with them, it seems to me, and so I’m often most aligned with him. But like the ‘what’s your favorite line’ question, a hazard of directing a play is loving all of them—especially in a play by Shakespeare, the master of argument.)

This play is packed with bloody battles and relentless backstabbing.  What are some stand-out moments audiences should pay special attention to?

The play begins with a peace treaty of King Henry’s making – a compromise that, like most diplomacy, satisfies neither side fully, but absolutely ends this war in Act 1 Scene 1. It takes immense courage, humility, and sacrifice to achieve that peace—it takes immense strength of character. That moment goes to the heart of the play’s investigations into leadership, power, and the nature of ongoing war. Throughout the play, I invite you to notice how many times we can say: the War is Over!

I think King Henry gets a really bad rap. He’s often referred to as a weak king, a bad king, a wimpy king. Part of this is historical – his dad was super-soldier Henry V ‘who made the Dauphin and the French to stoop’. I mean, it’s not really possible to argue that Henry VI was a terribly effective king, for sure – lots of infighting and power grabs likely doomed any chance of his being a calm and powerful reign when he was crowned as a baby. But as he is in this play, made up of the words and deeds of this Shakespeare-created character, I find a full-throated argument for peace, and actions to back it up. In any conflict, if you want to resolve it, someone’s got to go first. Someone’s got to be the first one to put down the sword. Gosh, what a risk. What nerve. What character it takes to do that. And it comes with a cost.

How are Shakespeare’s Histories distinct from his other plays?

Well, it’s like how Steven Spielberg’s movie Lincoln is distinct from Steven Spielberg’s movie E.T. the Extra-Terrestrial. Both of those are masterpieces. Both of them allow audiences to wonder into the nooks and crannies of rich, wonderful characters in high-stakes circumstances. Lincoln, though, populates its story with real people who affected the history of us – people whose actions were prologue to the history we ourselves are making today. Another consideration for Shakespeare’s (or Spielberg’s) histories is that they are still, to a large extent, historical fiction. Just ask the folks at the Richard III Society (who argue that Shakespeare’s plays have long maligned the true character of the good king) or many Civil War scholars (who resist the hagiography of Lincoln typified in that eponymous film’s gorgeous score and structure).

I love the History plays, and this is one of my favorites. It’s got tragedy, comedy, history— even a little pastoral! Some of the best dramatic speeches in all of Shakespeare:  Margaret’s ‘Brave warriors,’ York’s ‘She-wolf of France’, Henry’s ‘So many hours’, Richard’s ‘Tut!’, Henry’s ‘And let our hearts and eyes, like civil war/ Be blind with tears, and break o’ercharged with grief’ and all of 2.5… the list goes on and on. This play also has some weirdtastic comic scenes – that wooing scene between Edward and Lady Grey (3.2) sounds like it came right out of Much Ado, except the sparring is more regularly matched (and in verse)! But the main distinction is that the history plays take a look at how we got to be who we are now – and that’s always a compelling question.

The Henry VI tetralogy is often presented as a conflation.  What is the benefit to seeing these plays in their full glory?

The benefit is… seeing these plays in their full glory! Some of my favorite speeches, complex arguments and turns of phrase are in this particular play: from Henry, Margaret, Richard, Warwick, York, Fathers & Sons, Edward, and Clifford. In a one-production conflation of all four plays (Henry VI parts 1 + 2 + 3 + Richard III), or a conflation of all three Henry VI plays paired with a standalone Richard III, you sacrifice an awful lot of the nuance, argument, and poetry that everybody gets in this play on its own. These plays are already conflations: conflations of several years’ history squashed down into each single play.

In a pivotal moment, Richard whispers in his younger brother’s ear and changes the course of the scene.  The whisper isn’t included in the First Folio but appears in other editions.  Why did you choose to include the whisper in this production?

In preparing this script, co-director Jim Warren chose to use parts of the first known printed version of this play, the 1595 Octavo version (he wrote a terrific intro to the Octavo in his program notes). The Octavo text, in general, is often more efficient/ blunter throughout the play than the Folio.  In rehearsal, the actors and I discussed the differences, and sometimes swapped in an Octavo line that Jim hadn’t initially picked, and sometimes restored Folio text we preferred ‘on our feet’. Those choices in rehearsal come down to serving the play’s clarity for the audience, and an X factor of juice and playability for the actor – sometimes, we just liked one version better! We use about 50 lines’ worth of the Octavo text – from a single word or phrase to a few lines, sometimes up to six lines in a row. **Speculation warning: I have no evidence to support this theory except study of the text and its variants, but to me, the Octavo text feels like someone went to the playhouse and wrote down what they heard and saw there, with the technical speed of, you know, quill and ink and memory. It’s such a fascinating glance into how the play was originally perceived, thinking of it that way!

Most often, bits of Octavo text are deployed in this production to help achieve a cut (we cut 30+ minutes from the play that got us to the ASC’s ‘two hours’ traffic’ standard).  But there are a few other differences, and this stage direction is one of them: ‘Richard and Clarence whispers together’ at that crucial point in 5.1. In rehearsal with the actors, we did look at that moment on its feet with that stage direction and without it, and discussed the difference it makes in the characters of all the brothers. Especially in this Playhouse, I’m interested in the staging conditions of these plays – notably, any rarely occurring, explicit stage direction. “Exit, pursued by a bear” in The Winter’s Tale, to take the most famous example, is not the same thing as We See Antigonus Get Eaten, or Antigonus Nobly Fights The Bear and Loses, right? One of those explicit stage directions is this one that implies that George changes his mind after what Richard whispers to him, which has profound implications: it means that Richard makes the difference. Even if George is on his way to making that choice to restore his familial honor, with that stage direction, Richard’s whispers are the final straw in choosing a course that changes the outcome of that battle. Since the ASC is on a four-play arc that culminates in Richard III next season, and given that the structure of Henry VI, Part 3 really does ramp up to that, the Richard-prompted action makes all kinds of sense.

Is there anything else you’d like our audiences to know?

This play is one of Shakespeare’s earliest, and it’s terrific historical fiction about one of the juiciest games of thrones in English history – The Wars of the Roses. Here’s another way to think about that: this play was one of those early few that got playgoers all abuzz about some new kid on the playwriting block, William Shakespeare. If showbiz hasn’t changed much in 400 years (and since that biz is rooted in human nature, I doubt that it has), that means this play really is one of a few plays that launched William Shakespeare, got him more collaborators, more access to venues, patrons, and players. It certainly got him some bitter rivals! We know so little from the printed record about Shakespeare the person, but one of the few existing references we have is from jealous playwright Robert Greene, who paraphrased a great line from Act 1 Scene 4 of this very play in order to deride our Will in print. He warns his fellow “real” poets in his 1592 Greene’s Groatsworth of Wit:

‘”…there is an upstart Crow, beautified with our feathers, that with his Tygers hart wrapt in a Players hyde, supposes he is as well able to bombast out a blanke verse as the best of you: and being an absolute Johannes factotum, is in his owne conceit the onely Shake-scene in a countrey.”

I suspect this play changed the world a little when it premiered.  Its characters were known figures from playgoers’ not-too distant history (these civil Wars of the Roses happened 140-ish years prior to the first possible performance of it—a similar time relationship as we in the States have right now to our own Civil War.) To crib a bit from Harold Bloom’s argument in his Shakespeare: The Invention of the Human, in a society whose understanding of what we now call Psychology was about as complex and compassionate as the Humors of Blood being treated with leeches, and where literary characters on a stage were quite often a Type that would behave predictably within their Good or Bad, Villainous or Innocent, Lawful or Lustful or Heroic boundaries, our Will peopled this play with characters who have contradictions, flaws, heroic impulses and nefarious deeds. And to go back to your original question, with these conflicted, complex characters who persuade and inspire us one moment and horrify us the next, we easily find ourselves switching sides with them, in their battles for peace. (And in that irony lies the human condition.)

Come see the play that made Shakespeare’s fellow writers jealous!