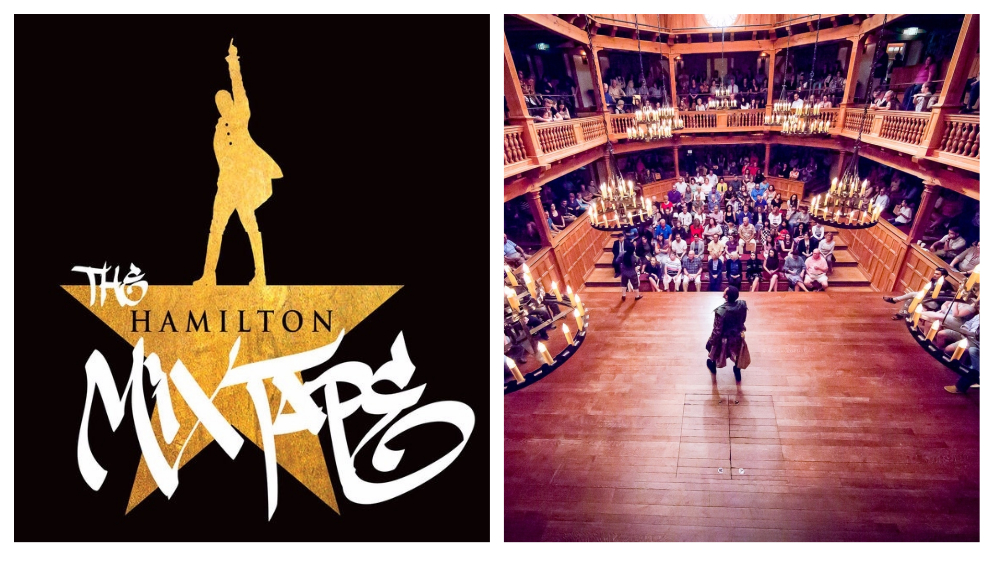 Once I accepted the position of Literary Manager here at ASC, I knew I would soon be asked – frequently and repeatedly – “what is a companion piece?” and  “what do you mean by ‘inspired by’?” I knew that I would need clear, articulate answers. I turned those questions over and over in my brain; I read sncproject.com backward and forward; I explored projects that I thought somehow might be similar to ours like “Dear Mr. Shakespeare,” part of the British Council/Guardian commissioned Shakespeare Lives short film collection, and Hag-Seed, Margaret Atwood’s contribution to the Hogarth Shakespeare Project. One morning, I was out for a run when it struck me – the music in my earbuds was precisely what I was looking for as a way to understand what the project could be. Shakespeare’s New Contemporaries project is to William Shakespeare’s canon what The Hamilton Mixtape is to Hamilton.

For those of you who are unfamiliar, The Hamilton Mixtape is a concept album inspired by and in conversation with the Broadway blockbuster Hamilton. On the album, hip-hop artists, rappers, pop stars, musical artists of all stripes remix, reimagine, and recontextualize songs from Hamilton.

Some of the most acclaimed songs from the album take a lyric or an idea from Hamilton and then riff off that lyric, seeing just how much the idea can hold and where it can lead. “Immigrants (We Get The Job Done)” and “My Shot” are just two exemplary songs in this vein. What Shakespeare line has always jumped out at you? How can your interrogation of that line become the springboard to something contemporary, something original, something you?

It’s not just lyrics from Hamilton that are explored in the Mixtape. The brief interludes “Take a Break” and “Stay Alive” riff on music and rhythms from songs of the show. What would it mean to rhythmically, or structurally, explore one of Shakespeare’s texts? For the most part Shakespeare’s plays proceed in a chronological order and operate in a causal environment. What if your play didn’t? What if it proceeded backward in time like Harold Pinter’s Betrayal or moved backward and forward through time like Paula Vogel’s How I Learned To Drive? What new windows into the play would be opened, what new understandings would we be given?

Some of the songs on the mixtape, like Dessa’s fierce “Congratulations” and Watsky’s rapid “An Open Letter (Interlude)” introduce the listener to songs that were originally conceived by Lin-Manuel Miranda as part of Hamilton, but were cut at some point in the process as the show made its way through workshops and Off-Broadway to Broadway. What scenes or moments do you think might be missing from Shakespeare’s plays? What storytelling gaps can be filled with your imaginative writing? Of “Cabinet Battle 3,” which shows our founding fathers wrestling with the issue of slavery, Lin-Manuel Miranda said that he “totally wrestled with this rap battle and spent months writing it” before realizing that it didn’t work in the context of the musical, but “it was worthy for me to write, and cathartic for me to write, so I’m glad it’s included [on the mixtape]” (“Making The Hamilton Mixtape”). What issues in today’s world do you wish Shakespeare and his characters could have wrestled with?

In a small way, the album also offers a glimpse at the possibilities that might come from writers adapting their craft to meet our staging conditions. “Say Yes to This” offers a woman’s perspective on a plot point that is told from a man’s perspective in the show; Regina Spektor’s “Dear Theodosia (featuring Ben Folds)” offers a genderbent version of a song conceived as sung by two men; and “Cabinet Battle 3” doesn’t just double parts, but rather sees creator Lin-Manuel Miranda singing all four of the roles on the track.

Nearly half of the songs on the mixtape are covers. These songs, like Andra Day’s “Burn” and John Legend’s “History Has Its Eyes On You“,” are recognizable, primarily follow the source material, and are made fresh by the singer, the song interpretation, and the arrangement. While Shakespeare’s New Contemporaries isn’t looking for literal translations of Shakespeare’s plays or scene-by-scene retellings, we are open to projects that, like these covers, start with the solid foundation of Shakespeare’s text and build something from that that offers a new context for or a new perspective on the source material (e.g. My Own Private Idaho, 10 Things I Hate About You). We look forward to seeing Shakespeare’s stories in your voice, through your eyes, and in worlds of your creation.

With Shakespeare’s New Contemporaries, we seek to create a canon of new plays that is as diverse, robust, and imaginative as Shakespeare’s canon. We look forward to seeing the wide variety of ways in which writers’ interpret the call for plays “inspired by and in conversation with” Shakespeare’s work. And, if you need some jams to get you started on your writing, just listen to The Hamilton Mixtape.