For many years, Saturday Night Live had a recurring character named Stefon (played by Bill Hader) who would show up on “Weekend Update” to offer advice on what New York City destinations were must-sees for tourists. About the outlandish hotspots he’d recommend, Stefon would always say “this place has everything!” The gleeful exclamation is how I feel every time I think about the Shakespeare titles that we’ll be considering for the second round of Shakespeare’s New Contemporaries – these plays have everything!

First, the facts: from June 1 – August 1, 2018, the American Shakespeare Center will be accepting submissions of new plays that are inspired by or in conversation with Othello; Henry IV, Part 2; A Midsummer Night’s Dream; and Cymbeline. Two plays will be selected by early 2019 and produced in 2020. (Applications for the first round of Shakespeare’s New Contemporaries are currently accepted through February 15, 2018).

Now, my excitement. The four plays being considered for the second round of the Shakespeare’s New Contemporaries project really do have everything. Each play is representative of a different distinct genre of Shakespeare’s canon; there’s the tragedy of racism, manipulation, and betrayal (Othello); there’s the beloved magical comedy (A Midsummer Night’s Dream); there’s the history play that both stands on its own and is part of a larger historical narrative (Henry IV, Part 2); and there’s the beguiling romance (Cymbeline).  In addition to their generic diversity, the plays also offer a wealth of thematic material from jealousy and fidelity to loving couples and lusty teens to political machinations and family strife. These plays contain some of Shakespeare’s most enduring characters – Iago, Puck, Falstaff, and Imogen, to name a few. The plays span societies, time periods, continents, and more.

From a twenty-first century perspective, the plays also showcase a range of familiarity to contemporary audiences and artists. Who here read/saw/performed A Midsummer Night’s Dream at some point in their schooling? (*Raises hand* But let’s keep those photos of me in the 7th grade production locked away at my parents’ house please). What about Cymbeline? I’d hazard a guess that fewer of this blog’s readers raise their hands for that one. (Fun fact: here at ASC, A Midsummer’s Night Dream has been produced 11 times; Othello five times; Henry IV, Part 2 once; and Cymbeline twice).

In short, with whichever lens you choose to view these plays, it’s easy to see that these four titles offer tremendous launching pads for new work. How will 21st century playwrights engage with questions of racial politics, global politics, family politics? When contemporary characters seek out escape and magic in their lives, where do they go? What linguistic devices shape our relationships and communication today?

The diversity of the plays also opens up a wealth of what-ifs. What if the Oberon and Titania’s Changeling Boy tells his side of the story? What if Hal doesn’t banish Falstaff? What if Posthumous trusted his wife’s fidelity? What if Othello did?

With plays like these that really do have everything, anything is possible.

Already we’ve seen tremendous excitement about the Shakespeare’s New Contemporaries project. Scripts are being submitted and sent out to readers for consideration for the first round. It is clear that this endeavor is inspiring playwrights to engage with all that Shakespeare has to offer. And I, for one, can’t wait to see what this next round of titles brings. 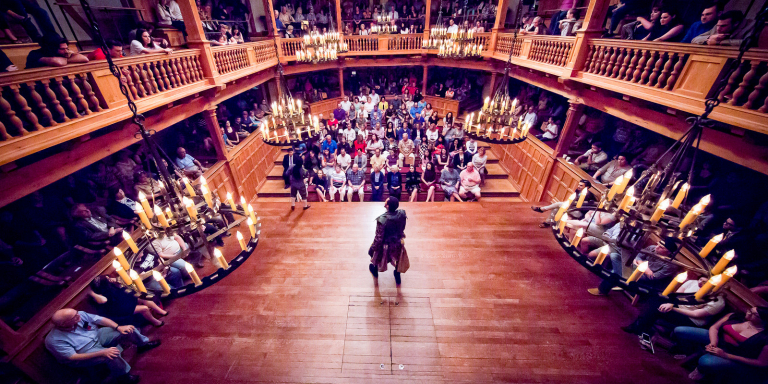 Add your voice to a new canon inspired by and in conversation with Shakespeare's plays.