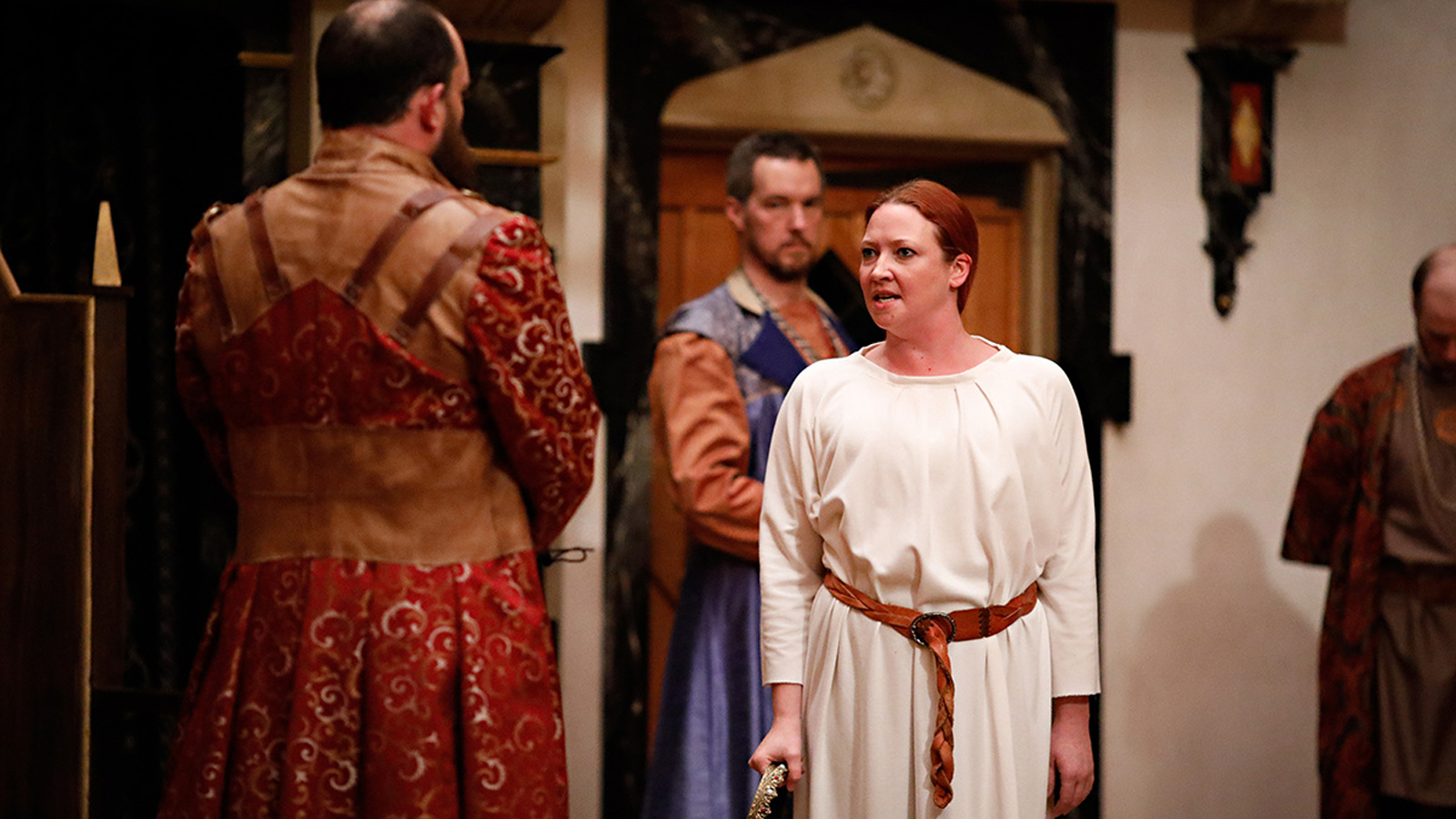 As the ASC’s Summer/Fall season works its way through the War of the Roses tetralogy (with The Fall of King Henry this past season and Richard III beginning in July 2018), the Actors Renaissance Season begins to explore Shakespeare’s Henriad. This dramatic journey begins with Richard II which shows the title character’s (played by Sarah Fallon) deposition by Henry Bullingbrook (David Anthony Lewis). Written over 400 years ago, and depicting historical events that occurred over 600 years ago, it seemed important for the two actors to begin their conversation by catching up on some context.

David Anthony Lewis: I think one notion that might really be hard for us Americans to wrap our heads around is this notion of the divine right of kings. In all the fantasy stuff that we are exposed to, it’s more often the king is the person that can take it and hold it, and this notion that the king is actually someone that God has said should be on the throne is something that is foreign to our way of thinking. That regardless of the qualities of the given monarch, the monarch is there because God said, and the notion too that everyone in the country believes that. Our country is so divided along religious lines. At the time it was written, and the time it was set, most everyone in the country had really similar beliefs in one god we’ll say (after that lines start getting blurred and ugly), but this notion that God said and that that meant something to everyone is important to understanding not only the play – but why the characters behave the way they do.

Sarah Fallon: It is crucial for the understanding of the play. I think that audiences, if they don’t understand that coming in, that is our job and Shakespeare definitely helps us do that job because it is brought up so many times. The divine right is something that Richard harps on a lot. Him breaking down from realizing that he is a mortal man – that’s a tough thing to wrap your mind around when you’ve been king as long as he has and you believe that God has put you there and you have a direct line to God. And when you no longer have that, what are you? And that’s the crux of what this play is about for him.

David Lewis: He ends the play a broken antenna – not receiving, not giving any information anymore… I have played this character [Henry Bullingbrook] before, but not in this play. I played him in Henry IV, Part 1 and Henry IV, Part 2. When I was reading it through this time, really paying close attention to what he is going through in this play, I had a new notion about Bullingbrook – that he might actually have come back to the country as he says he did only to reclaim what was his. And the notion that being king was sort of foisted upon him by his peers and the other lords appellant or what have you. And I’m not sure that is accurate, but it’s something that’s sort of new to me and I’m examining it as I move forward. I wouldn’t say that I had thought of him as malicious before – but certainly driven. I’m reexamining that with this play.

Sarah Fallon: Because it’s called Richard II, and because he has so much talking to do, some productions can get mired in Richard II as a solo artist, as an aria. It’s really crucial that it’s the duet of Bullingbrook and Richard. That’s what makes the play work, and that’s what makes it work on more levels than just looking at Richard’s journey. It’s so important how the two of them are balancing each other. What power is taking over what other thing, and what are we replacing the thing we’re getting rid of? That’s so important to how this play works and I think sometimes that gets overlooked

Audience members familiar with ASC’s work will also be familiar with its practice of cross-gender casting, even so, seeing Sarah Fallon take on the title role promises to be a unique experience.

Sarah Fallon: I think it’s really exciting. [Cross-gender casting for] a role this big, it doesn’t happen very often. So it’s a unique opportunity. Some people might think of Richard as a weak king and so, therefore, casting a woman in that part can be a bit of a pitfall because women are seen as weaker, generally speaking, right or wrong. And that’s something that I definitely want to stay away from – I personally don’t see Richard as weak at all, and I think that that is going to be important to portray that. He’s very strong, he’s very strong in his convictions, he’s very strong in his belief of his place and divine right. I don’t want that [the role is played by a woman] to be thing that [the audience is] focusing on the entire time – “oh my goodness. Look, that’s a woman playing a man” – I want that to fall away very quickly. So that’s my hope. That once audiences get in the room, that they forget about the fact that it’s being played by a woman.

Despite the historical distance from the events of the play, there was passionate discussion about the play’s relevance in our own world, and in Shakespeare’s.

Sarah Fallon: We cannot deny the fact that our country right now is pretty divided, and there are very strong thoughts on both sides of the aisle as to whether or not our president is a good leader or not. And that is the crux of what this play is about. So I hope that people think and see some similarities because there – here’s a ruler and he is appointed by God and there are a lot of people in the play that think he has surrounded himself with bad advisors and that he, himself, is not fit to be king. And I think that is something that a modern-day audience can absolutely relate to because that is certainly what is going on right now. And I don’t think you have to modernize the play for that to resonate with people.

David Lewis: The histories are amazing in that they never seem irrelevant. And I tell you what: the day they are irrelevant to us, it will be a great day for humanity – for everyone except Shakespearean actors. Because that will be the day that we’ve figured out how to get along, how to work together, and how to care for each other. I mean, it’s amazing and totally frustrating that these plays never become irrelevant.

Sarah Fallon: And it’s something that’s going on in Shakespeare’s day too. When this was written, there were a lot of people who thought, including Elizabeth herself, who thought, “Oh, this play is about me.” There were people who were worried about a queen who didn’t have an heir – Richard is a king who didn’t have an heir. There were people who were worried that she surrounded herself with bad advisers. She had her sister imprisoned and killed; Richard had his uncle killed. Even in Shakespeare’s day it is completely relevant to the politics of the time then.