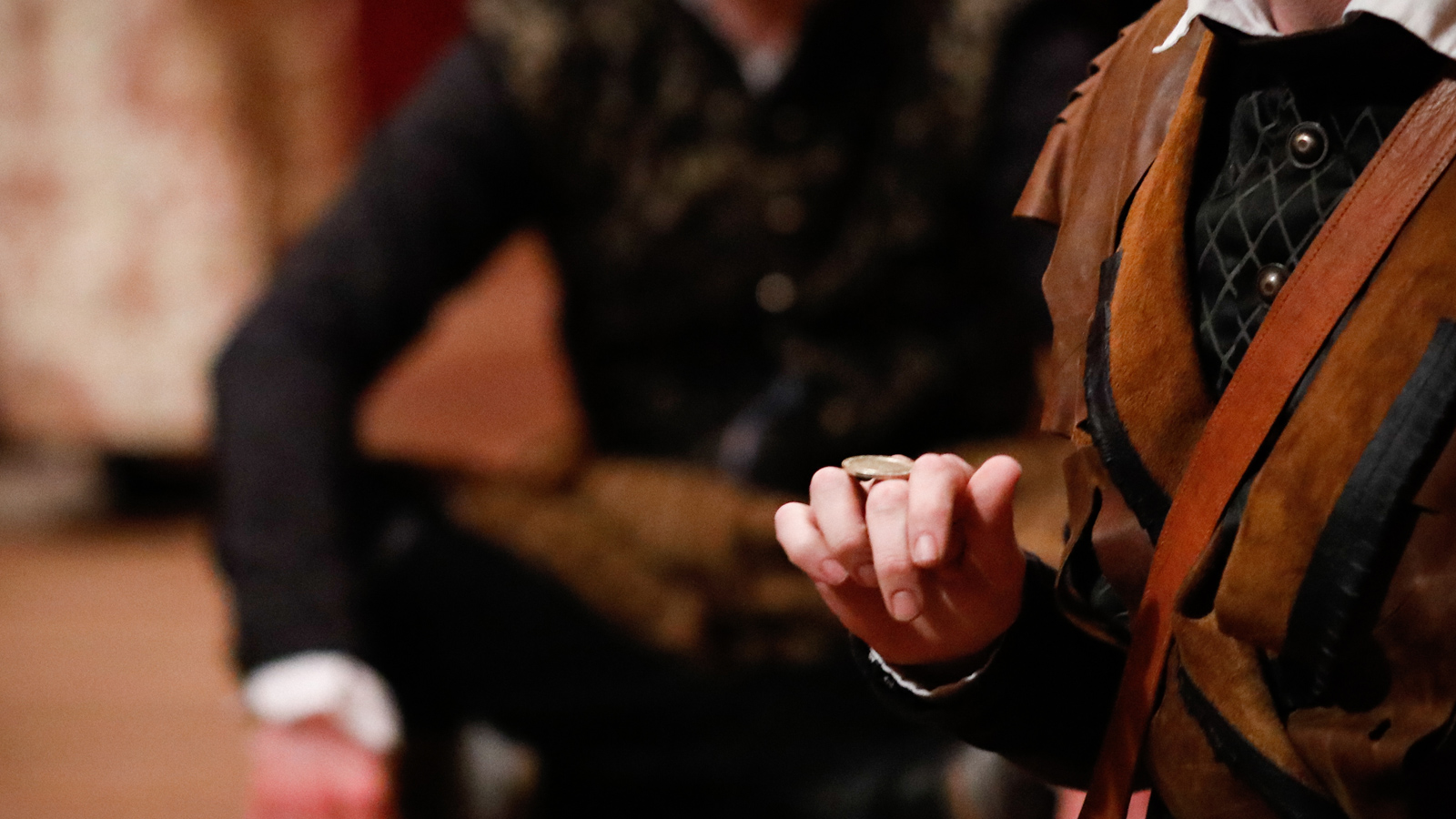 Between them, John Harrell (Guildenstern) and Chris Johnston (Rosencrantz) have played over 300 roles for ASC audiences. Having worked together for so long, the ease the pair have with one another is apparent from the get-go. An overview of the interview’s recording/transcription/editing process was met with:

Chris Johnston: We will not complete each other’s —

Now they’re teaming up to play the title characters in Rosencrantz and Guildenstern are Dead, the first major play from renowned British dramatist Tom Stoppard.

Chris Johnston: It feels like Beckett and Ionesco and Shepard had a kid, and then that kid had posters of Shakespeare on his wall. I feel like that’s kind of where this play lives.

John Harrell: Something I’ve learned in working on it so far is that this play is extremely bit heavy. I remember the verbal pyrotechnics pretty clearly, but the stage directions in it are super specific and very…

John Harrell: They’re like little plays within the play. I didn’t appreciate that and now I’m trying to learn it and thinking “well, how are we going to do that. How are we going to live up to this stage direction and be able to get all the lines right at the same time?” I think it gets increasingly complicated as the play goes on. The most complicated stuff happens with the business where Rosencrantz and Guildenstern have the letter that they’re taking to England that has instructions to kill Hamlet. And Hamlet comes and takes the letter and rewrites it and plants the letter on them so the instructions now say to kill Rosencrantz and Guildenstern. That plot point happens in Hamlet.  In a speech Hamlet gives to Horatio where he’s sort of explaining what happened and how he got off of this ship, he also explains to Horatio that he’s saved by pirates. And it’s always sort of the most ridiculous part of Hamlet, but in Rosencrantz and Guildenstern Are Dead you see that ridiculous plot point executed by a group of clowns and musicians with umbrellas and barrels. It’s completely crazy and it fits because it’s kind of the craziest part of Hamlet even though it all takes place offstage and so now we have to do it onstage while we’re talking about it.

Following up on John’s reference to the play’s “verbal pyrotechnics” leads to a further exploration of Stoppard’s use of language.

Chris Johnston: I’ve got a drinking game for the audience. Drink every time we ask a question.

John Harrell: It’s incredibly difficult to memorize. It’s super-recursive; they have the same conversation again and again with variations, so that is always tricky because you’re like “Wait a minute, which version of this conversation are we having since that…” you go from these very fast back-and-forth lines, Rosencrantz, Guildenstern, Rosencrantz, Guildenstern, Rosencrantz—and then one of them will have a really long monologue, kind of out of nowhere that is full—and this is intentional from the playwright—full of non-sequitur. Non-sequitur is a recurring theme of this play, and non-sequitur is really hard to memorize because you’re suddenly talking about something and you don’t know why! As an actor, the way we memorize things generally is “Oh, I moved to that subject because of the logic of the previous subject,” but he seems to be confounding that almost intentionally as an author.

In addition to the challenges that the text presents, there are also production challenges to take into consideration, especially given the nature of the ASC’s commitment to Shakespeare’s Staging Conditions.

Chris Johnston: That kind of has to happen.

John Harrell: There’s several of them. And really important ones.

Chris Johnston: The one where we’re under the blankets.

John Harrell: Where there’s a switcheroo.

Chris Johnston: That one I feel like has to be there. And so it’s going to be really interesting to see what happens.

John Harrell: There’s also a whole set of three barrels where the barrels have to have trap doors under them for it to work, and we can’t do that and so I don’t know what we’re going to do. We’ll find out!

It’s impossible to talk about Rosencrantz and Guildenstern are Dead without talking about Hamlet, and, sure enough, much of the conversation was devoted to questions of similarities and differences between the two plays.

Chris Johnston: I feel like there’s going to be a lot of pressure to make them similar—and that might not be the right way to tell the stories the best way. We’ve talked about at least costuming the worlds the same for both shows. Because the characters are written differently [in the two plays] I think that there will be vast differences, but I feel like once we get to February they might start to steep and mix with each other.

Chris Johnston: I’m a big stickler for Shakespeare having stock characters and kind of stock jokes. So I just wonder if, in the pre-R&G age, these guys were just these stock commedia lazzi, where we finish each other’s sentences, where we come in and we’re funny and we get out. And that’s all.

John Harrell: These guys exist in Hamlet (having played Hamlet, many many years ago) –

Chris Johnston: It was good though.

John Harrell: Thank you. They exist as a foil for Hamlet. Their best scene is, well, there are two terrific Rosencrantz and Guildenstern scenes. One of them is where they come in and ask some questions and he just destroys them and in Stoppard’s play they talk about how destroyed they were by him. He just demolished them. And then the next time you see them is when, after The Mousetrap, Hamlet’s ecstatic at having demonstrated this thing about Claudius. And they come in and ask him to come to his mother and he is trying to get them to play the pipe and he chews them out and destroys them again. They exist to be foiled – to sort of demonstrate how brilliant Hamlet is. And that is what Stoppard’s play is about. It’s about these two guys who have no existence of their own. They’re just… Guildenstern, at some point in the play, says, “Because if we happened, just happened to discover, or even suspect, that our spontaneity was part of their order, we’d know that we were lost.” I love that line because they’re swept up in the events of the great work of literature of the Western canon, you know? And so what chance to these two guys have?

As the conversation about the differences between the plays continued, the subject turned to the fate that awaits the title characters.

Chris Johnston: I think that the difference is that, in Shakespeare, you find art in reality, and I feel like this play is art versus reality.

Chris Johnston: They are constantly talking about death the whole time, and then you have the players who show up, and they talk about that death is not real…

Chris Johnston: It’s performative. I feel like it’s throughout the entire show. And to the end when *spoiler alert* the Player doesn’t die, and then you realize that it’s art versus reality. The art is not accepting death, whereas Rosencrantz and Guildenstern will. It’s interesting.

Chris Johnston: This play’s about death. We all die. So I think it’s great that it’s a chance for us to come and laugh and think about it. I hope people leave and feel a little more light-hearted towards the inevitable.