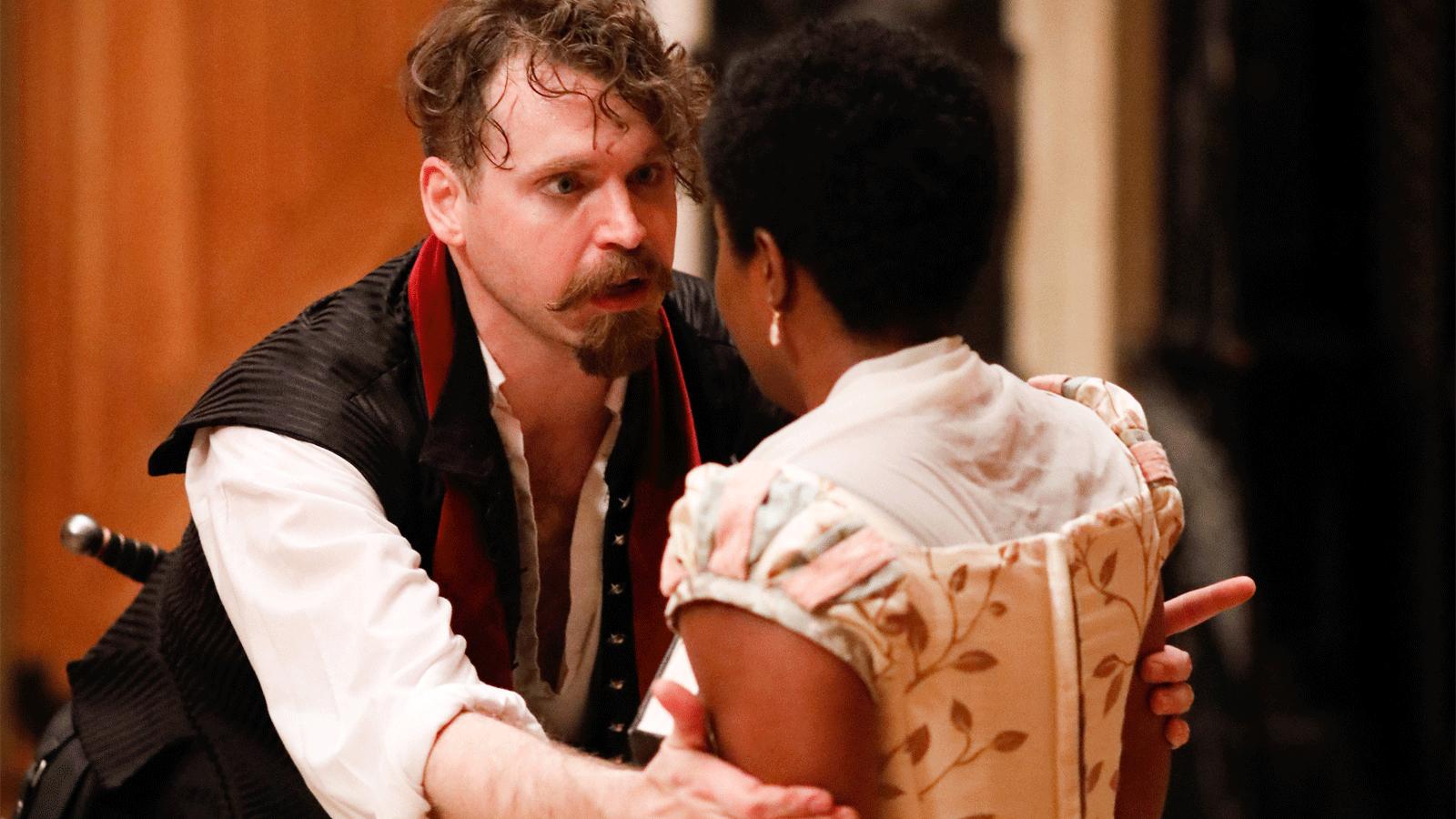 If Josh Innerst (Hamlet) and Shunté Lofton (Ophelia) had their way, this page might be blank. Joking aside, over the course of a lengthy conversation as they prepared for this production of Hamlet, a recurring theme was the expectations that, for better or worse, accompany any production of this play.

Josh Innerst: I always think it’s better when you can come into it not knowing where the story is going, though it’s hard to do that because there is so much scholarship around the play – there is so much anecdote around the play. It’s easy to get lost in that kind of muck… I hope that we get fresh faces that don’t know the story because that’s what it was meant to be. That’s what [Richard] Burbage had; he had an audience that didn’t really know what this story was going to be. And that’s when the show works best – when you don’t know.

Shunté Lofton: [If the audience is fresh] there’s not a David Tennant or a Laurence Olivier that you have to live up to. Or a Kate Winslet or a Helena [Bonham Carter]. It’s great to have these things [as an actor] if you’re lost and don’t know what to do with a moment, to look to someone else who has done it before and then you take parts of it and create something of your own; that’s super helpful. But also knowing that there are thousands and thousands and thousands of other famed productions of Hamlet just kind of looming over you.

Josh Innerst: I don’t want our audiences to lose [sight of the fact] that there is a world in which Hamlet avenges his father’s death and he repairs his relationship with Ophelia That is a possibility. And I want the audience to have that experience, for the whole play, that “this could totally end well.”

If you must know about the play though, Josh and Shunté are happy to talk about why the play has stood the test of time and what it offers to contemporary audiences.

Josh Innerst: So much of the heart of this play revolves around Horatio’s final monologue. “So shall you hear/ Of carnal, bloody, and unnatural acts,/ Of accidental judgements, casual slaughters,/ Of deaths put on by cunning and forced cause,/ And, in this upshot, purposes mistook/ Fall’n on the inventors’ heads.” The deaths throughout the play find meaning in their senselessness. Hamlet swears to avenge his father’s death. It’s a noble thing to do. In the vein of Revenge Tragedies it’s the only thing to do. Introduce the damage (both collateral and intended): Polonius dies. Ophelia dies. Rosencrantz dies. Guildenstern dies. Leartes dies. Gertrude dies. Claudius dies. And eventually, Hamlet himself dies. This is the truth of the play that allows it to transcend its own genre. The point is in the pointlessness.

The pair continued to explore the play – from the ghost to the density of the verse to the tone of the final fight scene – and commented on the similarities it shares with Shakespeare’s other work and the ways in which it stands apart.

Josh Innerst: It shares a lot in common with that Elizabethan/Jacobean obsession with regicide and succession…And a lot of Shakespeare’s plays revolve around that question. “Is it right to kill? What do you do when the God-ordained authority has been killed? What is the fallout of that?”

Shunté Lofton: Even though it has similarities to other shows, it is special in that it’s telling a completely different story; it has its own characters within it.

Beyond talking about the play itself as a text, both actors are especially excited to be sharing this production (and the others in the Actors’ Renaissance season) with audiences.

Josh Innerst: One of my favorite things as an actor is when you have the audience on your side and then you lose them 100%, and Hamlet has that big time. I think those moments of Hamlet losing the audience and then having to gain them back (or maybe not gaining them back) are the moments that I am most excited about in the play.

Shunté Lofton: I don’t know if the audience will respond to it initially, but something that I’ve been starting to look into with Ophelia’s mad scene [Act 4, scene 5] is how black women in the media are portrayed as far as having mental illness or as far as being able to deal with grief. I am excited to explore a condition in which society often believes that black women are not allowed to experience.

Josh Innerst: Any time you get an opportunity to see this play performed by a resident company of actors, there’s going to be something unique about that production. The context for which the play was written was a group of actors who knew each other so well that they could put up these plays [very quickly]. Anytime you can see a show that’s written for that kind of environment, that is going to lend an immediacy and a depth to the relationships that you’re lacking if you just do a one-off production somewhere.

Shunté Lofton: I’m excited that we’re doing Hamlet and Rosencrantz and Guildenstern are Dead. That shows Shakespeare’s New Contemporaries and the competition that’s going on. I didn’t really quite understand what a piece that’s in relationship with Shakespeare meant until this was brought up as an example.

In the end, while thousands of pages could be (and have been) written about Hamlet, our hope is that you’re able to leave much of that outside the theatre. But…

Josh Innerst: If you do want to know something, the crucial thing to know is that it’s a story – a father has died, a mother remarried very quickly, and a boy is grieving, seemingly alone. That triumvirate builds the play – a dead father, a distracted mother, and a grieving son. The rest of it falls out from that.