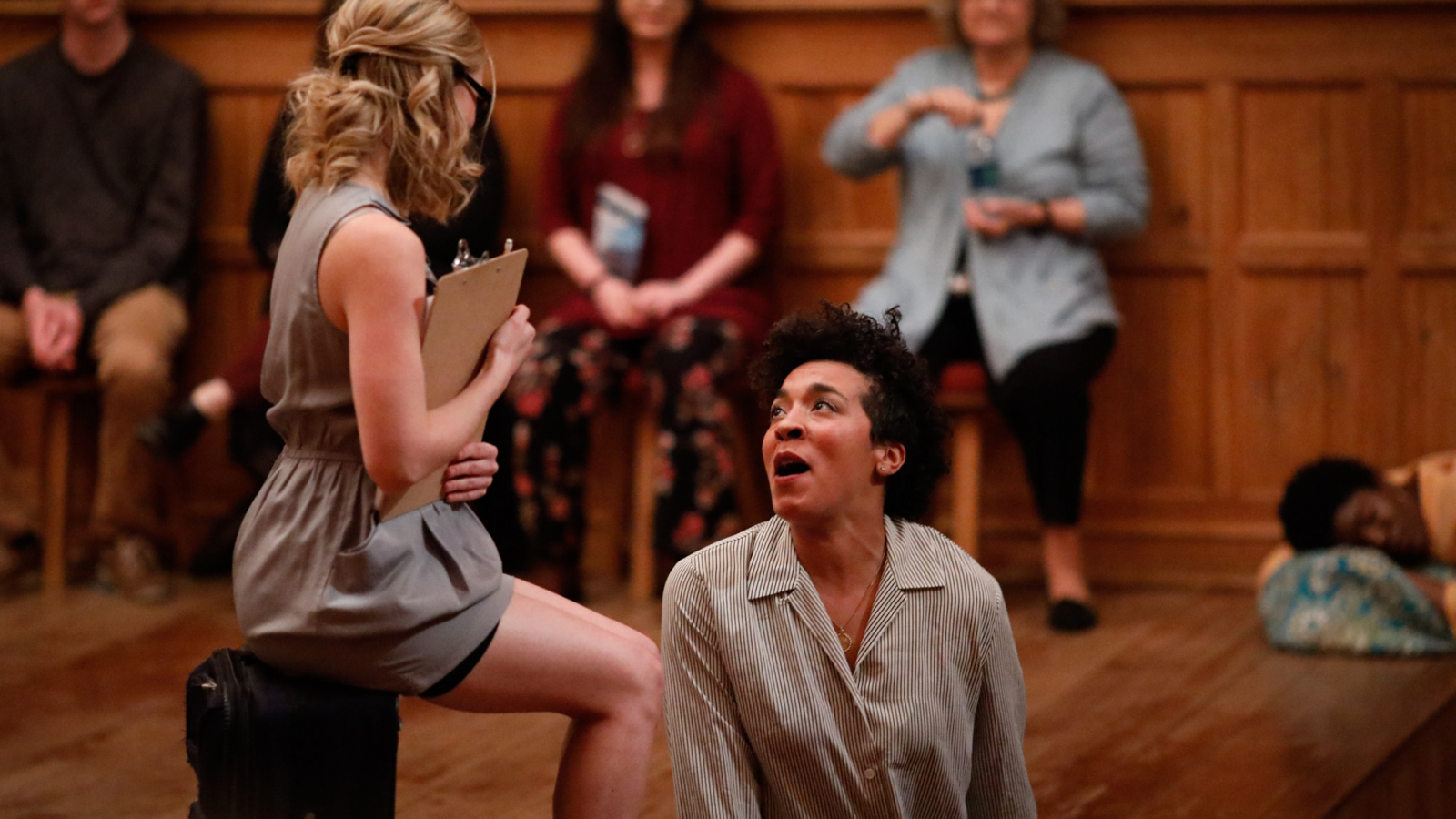 Friday, March 23rd saw the final rehearsal and first performance for the fifth play in the Actors’ Renaissance Season. The play, written in 1601, tells the story of a young man whose father is murdered and whose mother is romanced by the murderer. At the urging of his father’s ghost, he seeks revenge, adopts a disguise, mourns the death of his lover, and causes the death of others. Sound familiar? No, it’s not Hamlet. It’s Antonio’s Revenge by John Marston.

The play shares many similarities with the more familiar Hamlet. Scholars debate which play was written first and consider whether Marston and Shakespeare were in conversation or competition with each other or were both inspired by a shared source material (the so-called Ur-Hamlet).

Shakespeare’s play was written with the Lord Chamberlain’s Men and the Globe theatre in mind, Antonio’s Revenge was written for the Children of Paul’s (one of the boys’ companies alluded to in Hamlet) and St. Paul’s playhouse. And while Hamlet is a perennial favorite, Antonio’s Revenge is rarely produced. It admittedly pales in comparison to Hamlet (what doesn’t?), but the gratuity of its gore, the extremity of its passion, and the complexity of its language all make exploring it through production a worthwhile endeavor.

I’ve been thinking about Antonio’s Revenge a lot lately, and not just because of rehearsals. On the same day that rehearsals wrapped, I wrote a draft of a rejection letter to send to over one hundred playwrights.

With nearly 200 scripts submitted for consideration for the two production slots within the first round of Shakespeare’s New Contemporaries, the selection process was – and continues to be – competitive. At the moment, we have narrowed the initial applications down to a smaller group of semifinalists (approximately 25% of the pool). These semifinalists will go to a new group of readers and then be winnowed down to 10-20 finalists. From the finalists, two projects will be chosen.

At this moment in the process, and surely in the moments that lie ahead as the selection process continues, there is much to be admired in the work that is being turned away. There are many reasons, beyond writing skill, that a play might be rejected. Shakespeare and his staging conditions are at the heart of the ASC’s work – a play that leans too heavily on lighting effects, projections, or other modern theatrical technology might be better served at a different theatre. Additionally, a play that has a large cast, direct address, and generally meets our staging demands but fails to engage with Shakespeare’s work is also not for us. Finally, Shakespeare’s New Contemporaries seeks companion plays for four of Shakespeare’s titles at a time; a play well suited to our stage that engages with a Shakespeare play outside of those four will likely be more competitive in a round when that title is being considered.

Just as Hamlet did not signal the end of the road for Antonio’s Revenge, I am optimistic that the letters sent out are not the end of the road for these Shakespeare’s New Contemporaries applicants. Playwrights might consider seeking out other Shakespeare companies who might be a good fit for their plays; or they could continue to think about the ASC as the Shakespeare’s New Contemporaries project continues over the next nineteen years. Script readers have already reached out to me to say, “If you don’t select this play, I’d love to consider producing it at my company.” And even more potential readers can be reached through platforms like the New Play Exchange.

The opening night performance of Antonio’s Revenge was met with a joyous standing ovation. I look forward to seeing that same reaction when plays turned away from Shakespeare’s New Contemporaries – either now or as we move through the semifinal and final rounds – are finally produced.