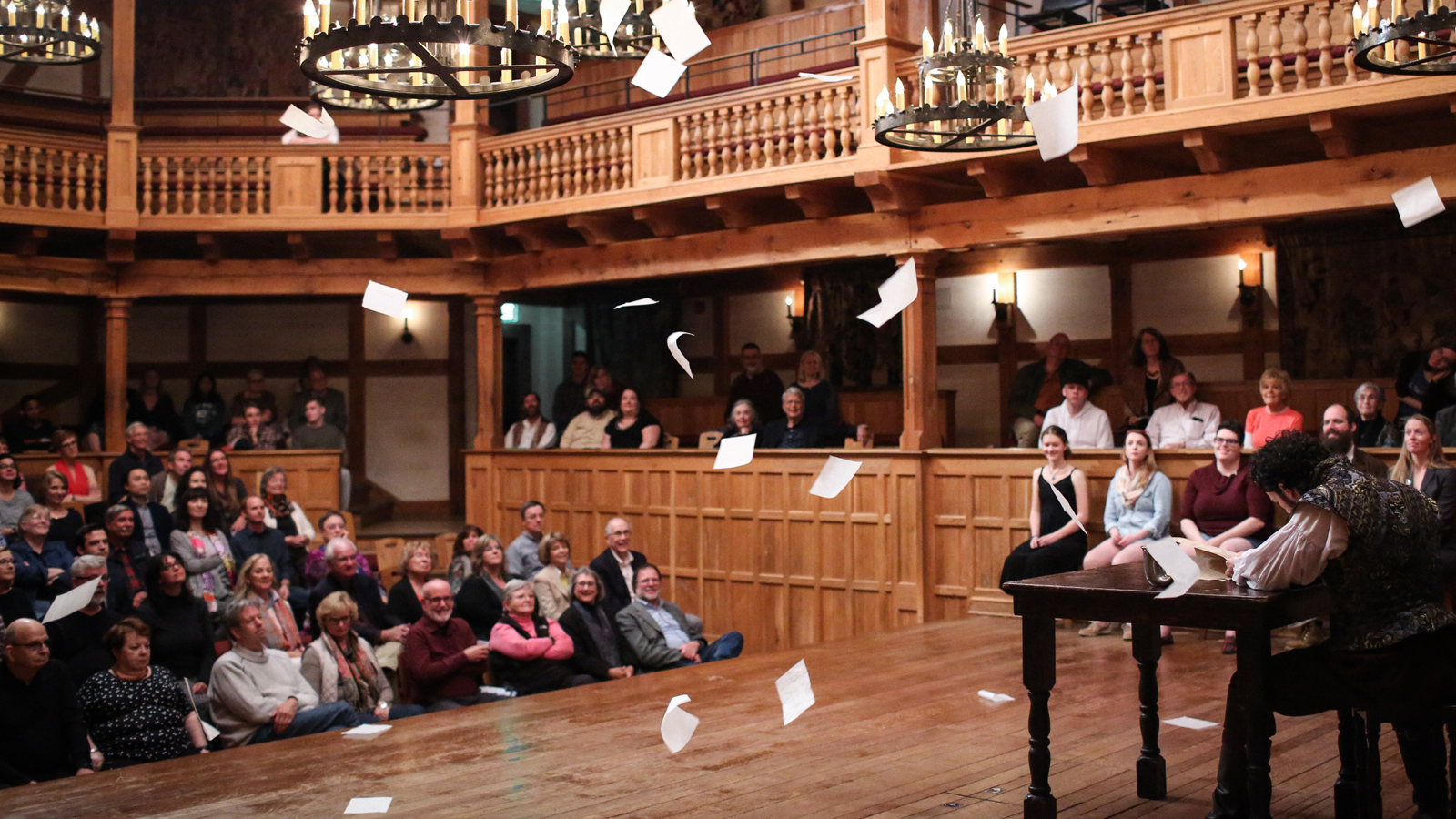 From nearly 200 submissions, and after months of reading and deliberation, two plays have been selected to launch Shakespeare’s New Contemporaries. Anne Page Hates Fun by Amy E. Witting, a companion to The Merry Wives of Windsor, will receive its world premiere as part of the 2019 Actors’ Renaissance Season. 16 Winters or The Bear’s Tale by Mary Elizabeth Hamilton, a partner to The Winter’s Tale, will be produced during the 2019 Spring Season.

While these two stunning plays are quite different, both demonstrate the strength of contemporary playwriting, display a deep affection for Shakespeare, and exemplify the potential that Shakespeare’s works offer for imaginative interrogation. We are delighted that these plays will be the first of our contemporary canon and we cannot wait to share them with the world!

Learn more about the plays and the inspiration behind them from the playwrights themselves.

Companion to The Merry Wives of Windsor | February 7–April 14

Anne Page didn’t always hate fun. Now, her New Hampshire hometown wonders why she stopped smiling. Single, content, and almost forty, she teaches English at her old high school, hoping to inspire at least one student a year. With her childhood friend, Courtney Ash, insisting on celebrating life in the face of terminal cancer, and her Egyptian immigrant student Alaa Farag starting a marriage protest in the town square, Anne Page and her neighbors in Windsor, New Hampshire are forced to face marriage, love, life, and loss. Inspired by Shakespeare’s The Merry Wives of Windsor, Anne Page Hates Fun explores the issues of equality, power, and consent challenging one small New Hampshire community and the ideals of love that apply to us all.

Last Monday when I saw I had a missed call from Staunton, Virginia, I immediately thought they called me by mistake…I never actually thought I’d win but I was very proud of my play because I wrote it specifically for this project. Working with the parameters outlined by ASC gave me a freedom to explore outside of my traditional wheelhouse. I love that this project makes it okay to have a complicated relationship with William, because it asks for new plays that are “in conversation,” and that can be interpreted in many different ways.

I love Shakespeare, but I’m not a scholar, so when Anne Morgan pitched me the project last December, while we crossed paths at the National New Play Network’s Showcase in Orlando, it sounded intriguing. I also thought that the component of the monetary prize could be career changing for this playwright who took a chance leaving her secure day job three years ago. Out of the titles [considered in the first round] I was only unfamiliar with Merry Wives so I bought a copy of the play and it clicked.

I immediately felt a pulse of wanting to have a conversation with this play. I often write about the complicated power dynamic between men and women, about expectations confronting desire. It surprised me to find that I had such strong responses along these lines when reading Merry Wives, and how the line “we are all the sons of women” struck me in regards to the current public conversation that is happening around sexual assault. Men are the ones raping and assaulting women, but women gave life to men. Beyond that, I found myself wondering, how can we continue making strides in gender equality and how can my work in theater keep contributing to that?

It’s amazing what a play written many centuries ago unlocked for me as a contemporary writer. I found this submission call to be a profoundly liberating experience as a writer—one that helped me to connect the past with the present, and my own work with the canon.

I can’t imagine what kind of tapestry will be formed over the next two decades, thanks to so many important and original voices of the American Theater, and I’m over the moon that Anne Page Hates Fun gets to be produced as the inaugural new play for Shakespeare’s New Contemporaries Project.

Witting, who resides in Sunnyside, N.Y., earned her bachelor’s from Ithaca College and her MFA in playwrighting from Hunter College. Her credits include The House on the Hill, The Midnight Ride of Sean & Lucy and Day 392, among others. The recipient of a Jerome Foundation Emerging Artist Fellowship, NEA Grant and The Anne Freedman Grant, Witting is working under commission from The Queens Council on the Arts. Witting, a teaching artist in the New York Public School System when not writing, also is a member of The Dramatists Guild, affiliated artist with National New Play Network, member of Mission to Ditmars Propulsion Lab, and founder of aWe Creative Group.

16 winters or the bear’s tale

Companion to The Winter’s Tale | May 1–June 8

16 Winters or The Bear’s Tale takes place during the sixteen-year gap between the first and second halves of Shakespeare’s The Winter’s Tale. After being condemned by her husband for adultery, Her escapes to a small cottage in Bohemia where her attendant, Pauly, cares for her. With nothing to do and little company, the two women do their best to survive the tedium, while the king laments his actions and starts an aging rock band. Meanwhile, their abandoned child, P., takes up with some bohemian artists and rebels against the patriarchy…while also falling in love with one of its better-looking representatives. Full of love, jealousy, mistaken identity, and male privilege gone wrong, 16 Winters explores the effects of reimagining social constructs and asks whether it is truly possible to create something new in the wake of repression.

The first time I encountered The Winter’s Tale, the gap in time in the middle of the play completely fascinated me. Yes, sure, the play has lots to say about jealousy, loyalty, obsession…But—16 years! That’s such a long time! That’s like, an entire youth and adolescence. And the queen was just waiting?! But what was she doing?!

I became pretty sure that she was doing something—and what if that something was, you know, discovering herself and her power in the world? What if she grew, and changed, and had desires, and…behaved badly sometimes?

I’m a little obsessed with the idea of being Good, particularly as this relates to women, historically (and now), and as it ties in with ideas of guilt, and also obligation. In Shakespeare’s play, Hermione is everything we could possibly want from a “good” woman: she is loyal, honest, kind, patient… innocent. Both literally and figuratively, she’s the statue of an Ideal Woman.

That’s not the woman I felt compelled to spend time with. Both because it struck me as—well, no one I’ve ever met—and because it seemed less useful than exploring the question of what it means to be good: who dictates the rules of goodness, what it means to fall short of them—because of choice or circumstance or both—and then what it means to make a conscious decision to remain there.

I hope this play will depict some ungood women (and men, too, sure) who seek something outside the bounds of expectation and obedience. I’m interested in characters who have feelings they don’t know how to deal with, and make choices based on those feelings (as Leontes does in Shakespeare’s play) and then have to contend with the reality of their choices (as Leontes, in my opinion, does not).

I think as a culture we’re at this moment of looking in the mirror and going “oh. Um. Oops.” But then what? I want to start from the place of: what now? And then have these characters try to figure that out for me, because I certainly don’t know.

Hamilton, who lives in Brooklyn, NY, earned her MFA in playwrighting from the University of Iowa. Her credits include We Three, The Plan, One of the Women, and The Quiet Ones. A Lila Acheson Wallace Fellow at The Juilliard School and a Jerome New York Fellow at The Lark, Hamilton is working on a commission from Studio Theatre in Washington, D.C., an NYSCAS commission through Page 73 and is a member of Ars Nova Playgroup. She was the 2005-09 recipient of the Iowa Arts Fellowship and has participated in The O’Neill Theater Conference, Youngblood, I-73, New Georges’ The Jam and Play Penn.