Imagining the possibilities presented by the Blackfriars Playhouse

Walking into the theatre for the first time, one is struck by the light – candlelight-evoking chandeliers and sconces as well as artificial daylight – and the warmth of the Virginia white oak beams. The theatre’s 300 seats are in a thrust configuration, with audiences encompassing the stage on three sides. Additionally, six seats border both the stage left and stage right sides of the stage. These “gallant stools” are a truly unique experience, as the patrons who occupy them are the often the first choice when actors choose to deliver lines to audiences. Gallants may find themselves let in on a secret, utilized as a coat rack, or made the butt of a joke.

The stage itself is roughly 22’ deep by 29’ wide. The upstage wall is a painted frons scenae, with a door at both the right and left corners. And in the center are curtains which open onto the “discovery space,” so named for moments in Shakespeare’s work like the revelation of Hermione’s statue in The Winter’s Tale and Ferdinand and Miranda’s chess game in The Tempest. The stage also includes a second story balcony; called “Juliet’s balcony” after the famous balcony scene in Romeo & Juliet, it is frequently used in scenes where the storytelling is assisted by distance or levels.

In the center of the stage floor is a trap door, a frequent exit and entrance for all manner of otherworldly creatures. In recent seasons, it has also served as a grave (Hamlet), a garden (Richard II), and a jail cell (Equivocation). Many feet above is a corresponding door in the ceiling – “the Heavens.” While textual evidence suggests that Shakespeare’s troupe may have used this opening as an actor entrance (for example: “Jupiter descends in thunder and lightning, sitting on an Eagle” – Cymbeline), the ASC’s safety concerns have, to-date, limited our use of this door to inanimate objects like confetti, streamers, etc.

Words alone cannot do the ASC’s Blackfriars Playhouse justice; better yet, enjoy the photos below. Or, best of all, visit us in Staunton and see us in action. 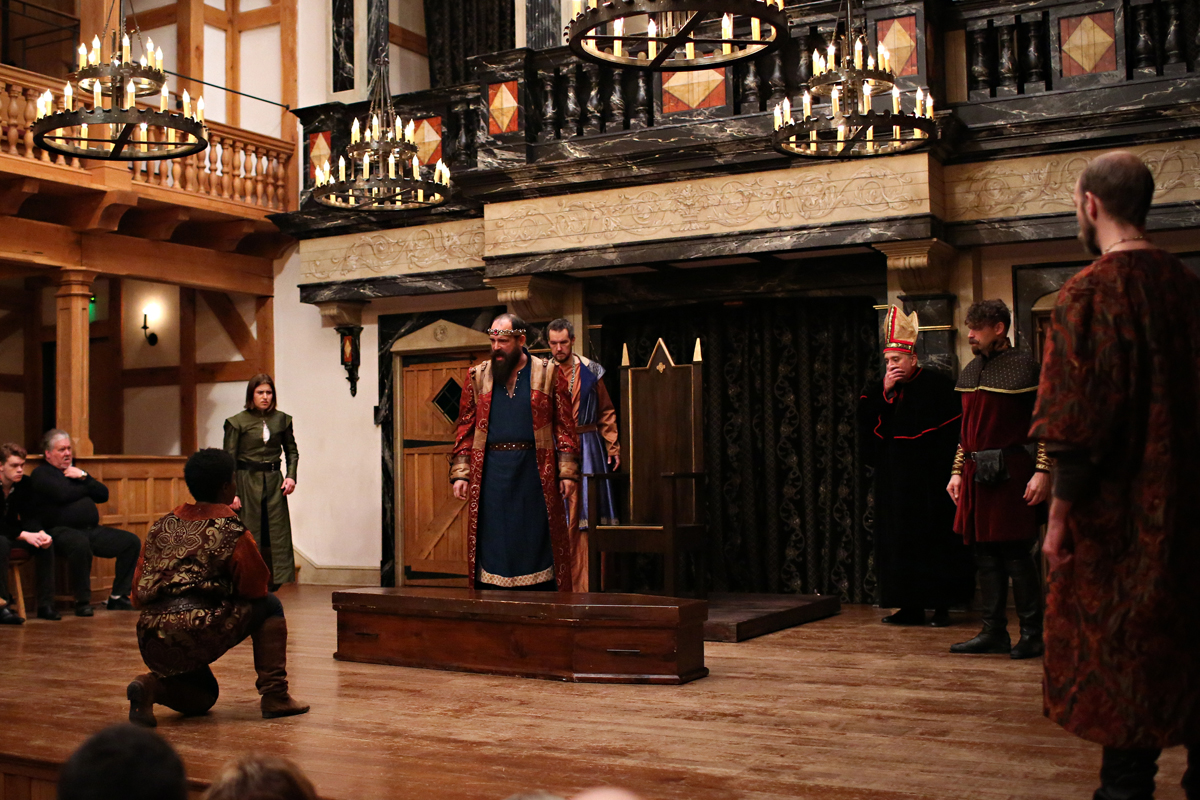 The cast of RICHARD II. Photo by Lindsey Walters. 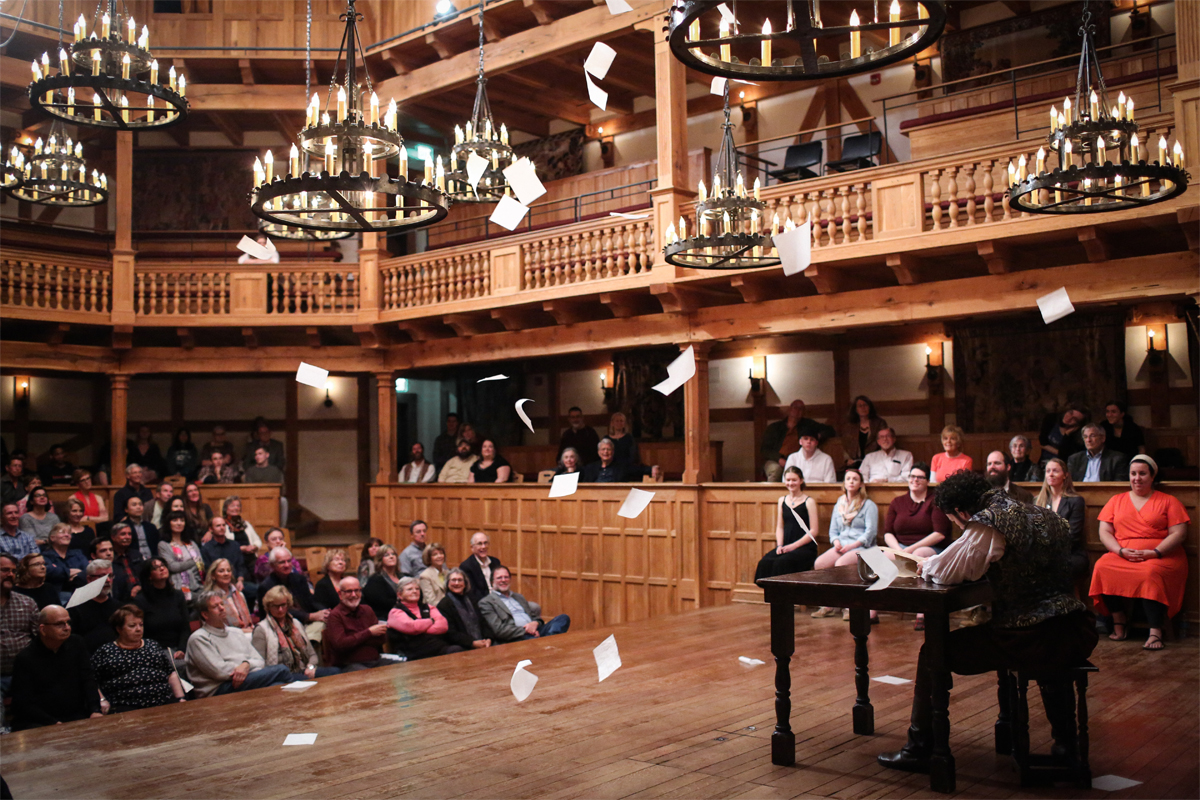 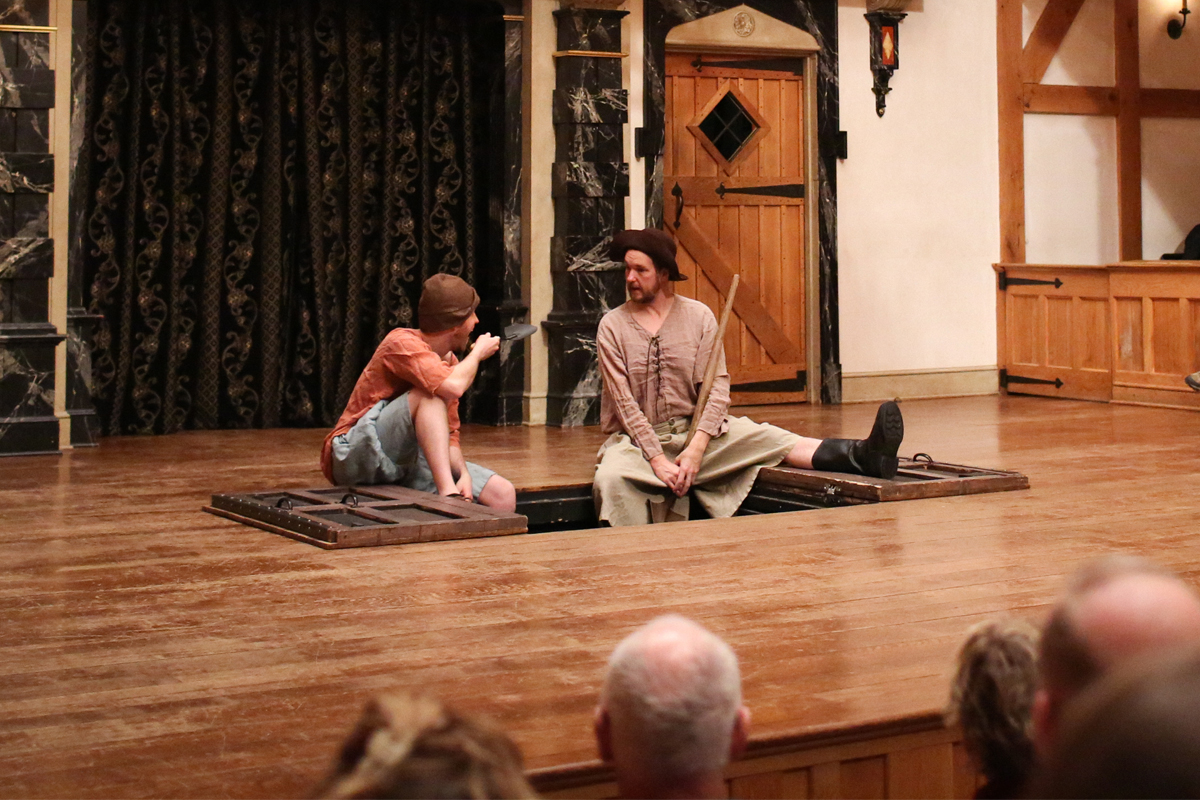 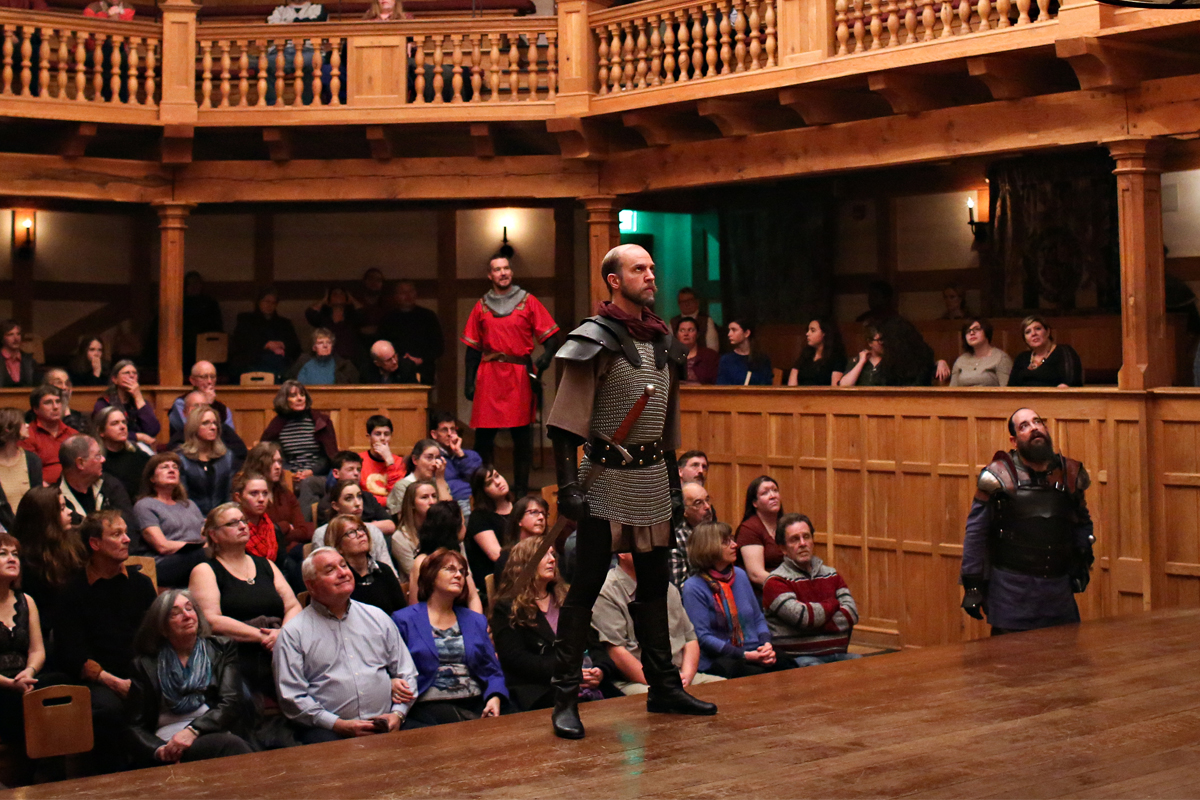 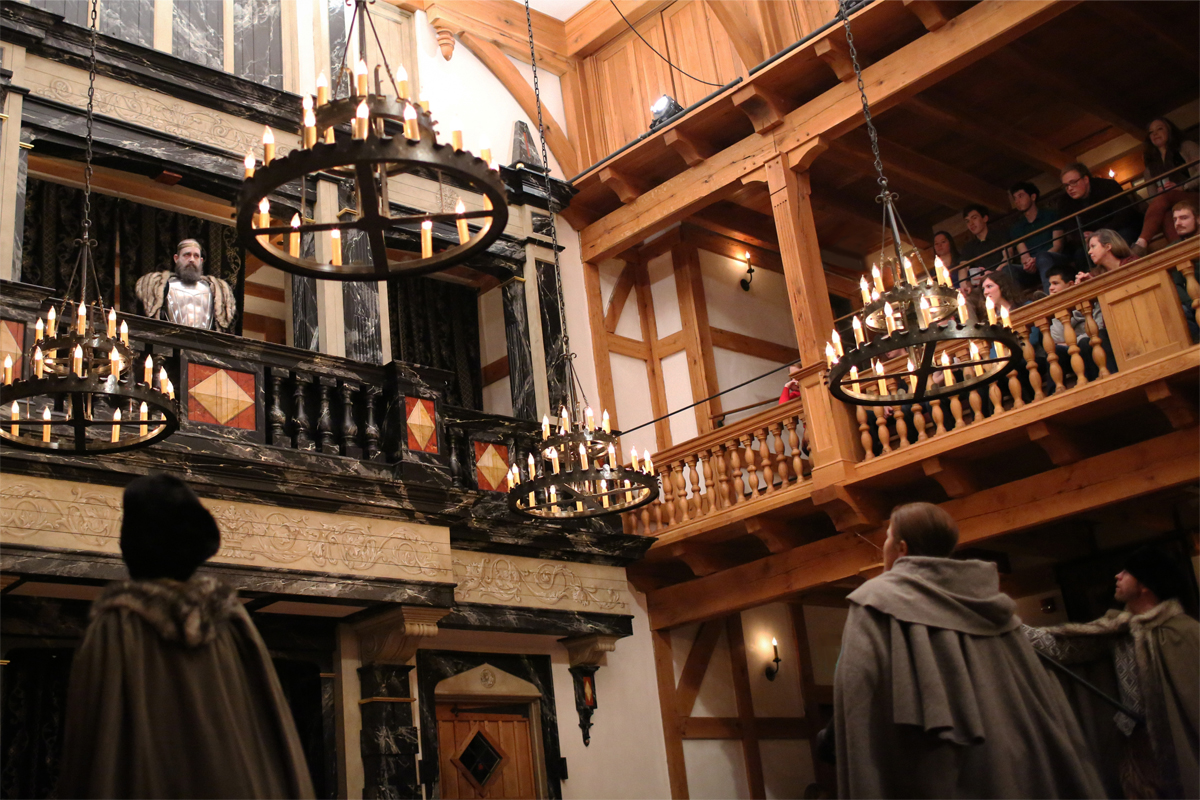 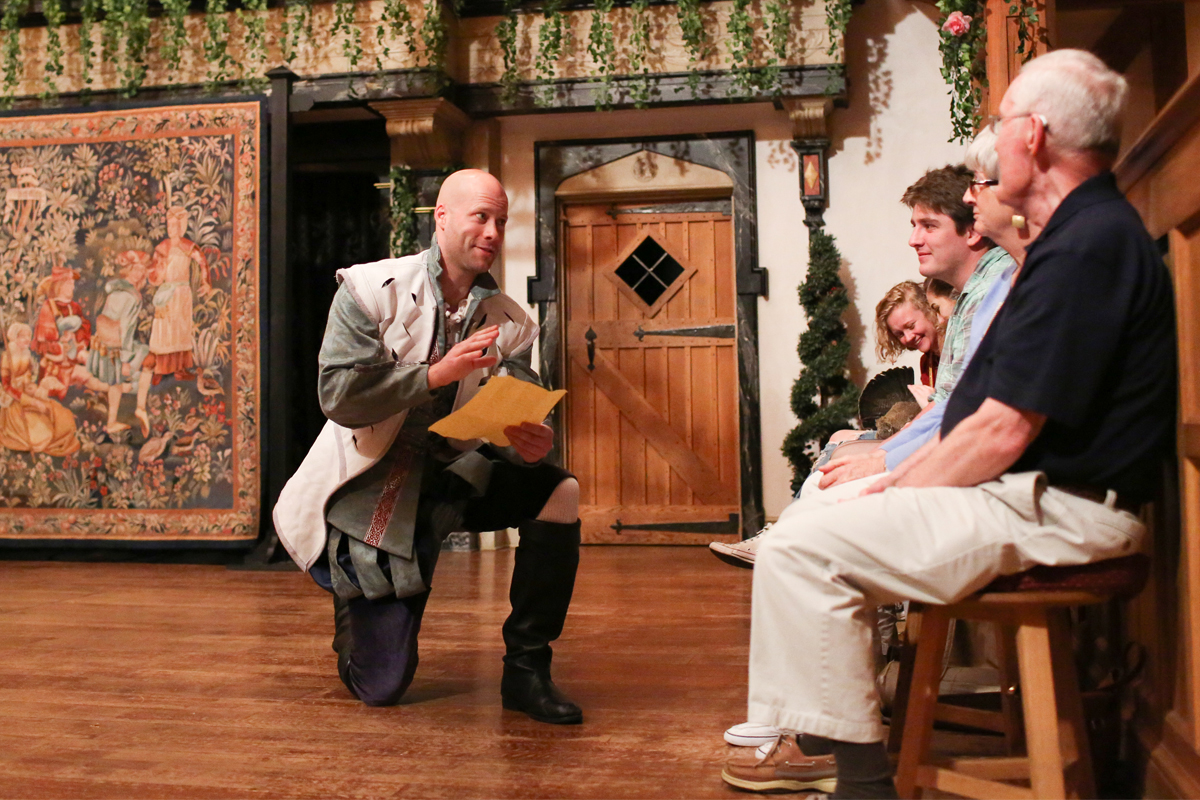 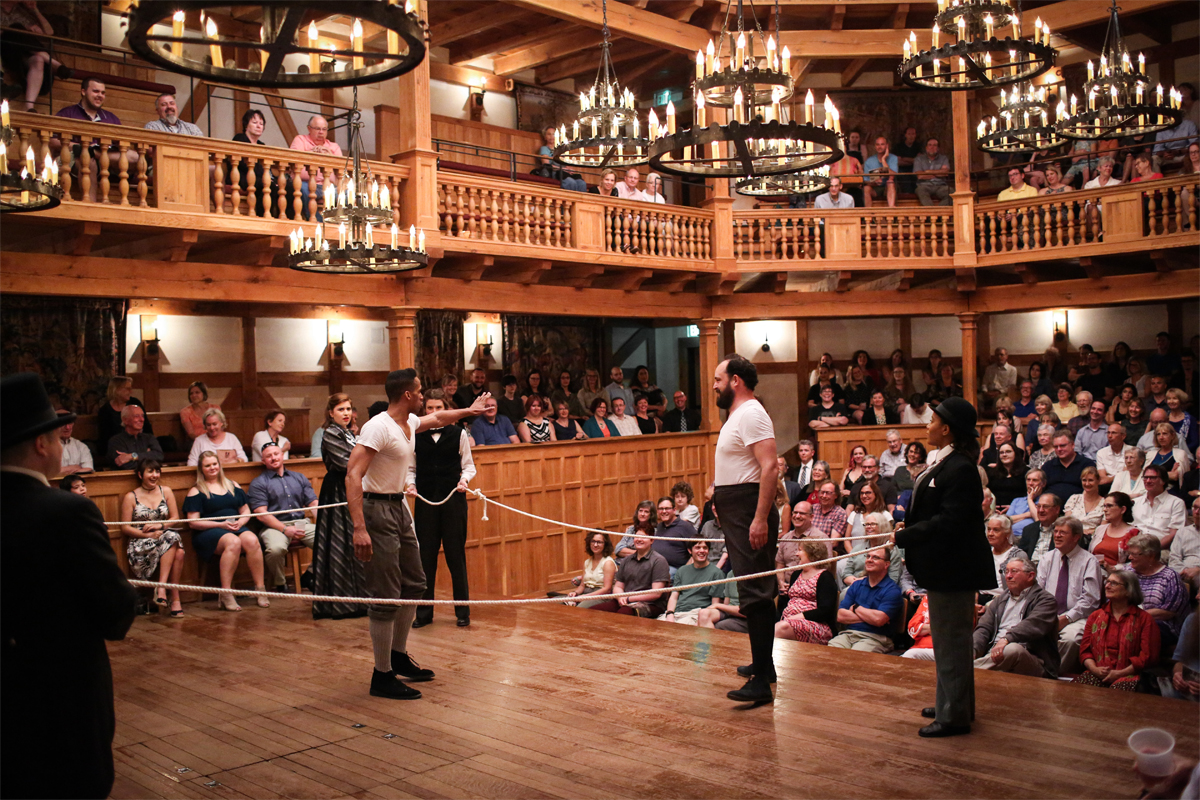 The cast of AS YOU LIKE IT. Photo by Lindsey Walters.