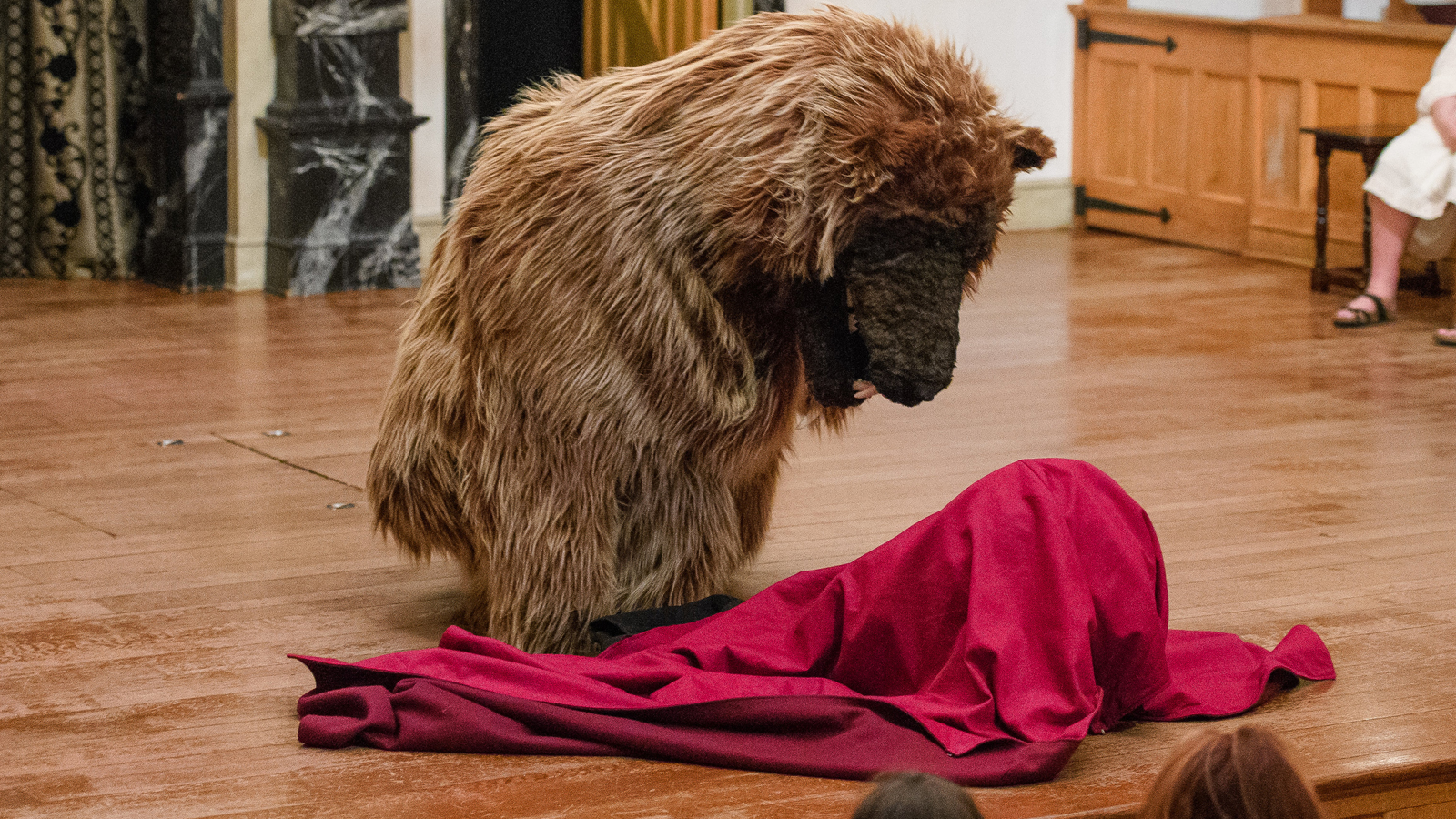 “Exit, pursued by a bear.” Probably the most famous Shakespearean stage direction of all time, at once hilarious and perplexing to modern audiences because it seems to appear without warning. Like the unfortunate Antigonus, we, too, are surprised by the bear’s sudden materialization (and even more sudden exit) pursuing a hapless man. The question that haunts each production of The Winter’s Tale, however, is how audiences should react to the bear within the context of the play. The Winter’s Tale begins with visceral, searing tragedy and it ends with redemption, reunion, and marriage (in other words, the classic hallmarks of a comedy). The bear interlude occurs smack in the middle, caught between the tragedy of Sicilia and the comedy of Bohemia. Is Antigonus’ death by bear the final “act” in the tragedy? Or does it kick off the comedy and set the tone for the second half of the play? To which genre does the bear belong? Last month I had the pleasure of working through this question with our talented Touring Troupe, who perform The Winter’s Tale as part of the 2018-19 Hand of Time Tour, and boy did they have a lot to say! Together we created our new Show Specific Workshop offering, “Staging the Bear,” which encourages participants to explore their own interpretations of the infamous Winter’s Tale bear.

Though a bear can seem random to our contemporary sensibilities, they were far more common in early modern daily life in London: as sport, in written works, and on stage. King Henry VIII had a bear-baiting pit constructed at Whitehall and Queen Elizabeth was also a fan of bear-baiting, frequently featuring the entertainment on her tours. Robert Laneham’s letter describes the spectacle presented by Robert Dudley, Earl of Leicester at Kenilworth Castle in 1575:

“Thursday, the fourteenth of July, and the sixth day of her Majesty’s coming, a great sort of bandogs [mastiff] were then tied in the outer court and thirteen bears in the inner…It was a very pleasant sport, of these beasts, to see the bear with his pink eyes leering after his enemies approach, the nimbleness and wayt [wait] of the dog to take his advantage, and the force and experience of the bear again to avoid the assaults. If he were bitten in one place, how he would pinch in another to get free, that if he were taken once, then what shift, with biting, with clawing, with roaring, tossing and tumbling, he would work to wind himself free from them. And when he was loose, to shake his ears twice or thrice with the blood and the slather about his physiognomy, was a matter of goodly relief.”

Not everyone, however, thought of bear-baiting as entertainment. In The Anatomie of Abuses by Philip Stubbes (1583) – along with attacking such vices as women’s fashion, prostitution, drunkenness, gambling, dancing, and stage plays – Stubbes condemns the violence and danger of the baiting arena:

“For, is not the baiting of a bear, besides that it is a…stinking and loathsome game, a dangerous, and perilous exercise? wherein a man is in danger of his life every minute of an hour: which thing though it were not so, yet what exercise is this meet for any Christian? What Christian heart can take pleasure to see one poor beast to rent, tear, and kill another, and all for his foolish pleasure? And although they be bloody beasts to mankind, and seek his destruction, yet we are not to abuse them, for his sake who made them, and whose creatures they are.”

Entertaining or barbaric, bear-baiting and bears, in general, were common sights for early modern English citizens and frequent features of prose and poetry of the time. The Winter’s Tale isn’t even the only play to feature a bear during this period. A most pleasant Comedie of Mucedorus the Kings sonne of Valentia, and Amadine, the kings daughter of Arragon (1598) by Anonymous (though some argue Shakespeare had a hand in some if not all of it), features a bear attack in a more lighthearted context with Mucedorus, a prince disguised as a shepherd, rescuing the princess Amadine from a bear. Printed in at least seventeen editions between 1598 and 1668, Mucedorus was one of the most popular plays of the early modern stage. The 1598 edition opens with Comedy, “joyful with a garland of bays on her head,” and Envy, “his arms naked besmeared with blood,” arguing over whose play it will be, which is especially interesting in light of The Winter’s Tale’s modulations between tragedy and comedy, and the bear’s position as a kind of fulcrum between them.

Primary sources like the above provide the starting point for the workshop. They place bears firmly in the early modern lexicon and set the foundation for the debate between “tragedy-bear” and “comedy-bear.” We then examine recent production history by comparing stills from several different productions’ interpretations of the bear. Some productions take a literal stance, creating as naturalistic (and sometimes menacing) a bear as they can, whereas others portray an abstract creature, more an ominous shadow than a physical presence, and still others go a different way entirely and anthropomorphize or caricature the bear.

Once participants compare early modern sensibilities surrounding bears with others from more recent history, it’s time to return to The Winter’s Tale and figure out how to stage the scene in a way that matches their own interpretation of this moment. Using a few bear masks from past ASC productions and any other available materials in the classroom, participants work through staging Antigonus’ fateful encounter with the bear in Act III, scene 3. Participants not only have to decide the nature of their bear in production (naturalistic, comic, or abstract) but also when it enters the scene (Shakespeare, though he dictates the exit, provides no firm indication of an entrance). After about 10 minutes of small-group collaboration, participants demonstrate their vision for the scene for the whole group. You would be amazed at how many variations can develop from just one scene! Participants come away from the workshop with a deeper understanding of this moment’s context in The Winter’s Tale, but will barely have scratched the surface of how many playable options exist in performance.

Aubrey Whitlock is the Education Associate and Camp Life Coordinator with the ASC. She holds a BA in Theatre Arts from UC Santa Cruz, an MA in Teaching from Chapman University, and an MLitt and an MFA in Shakespeare and Performance from Mary Baldwin University. 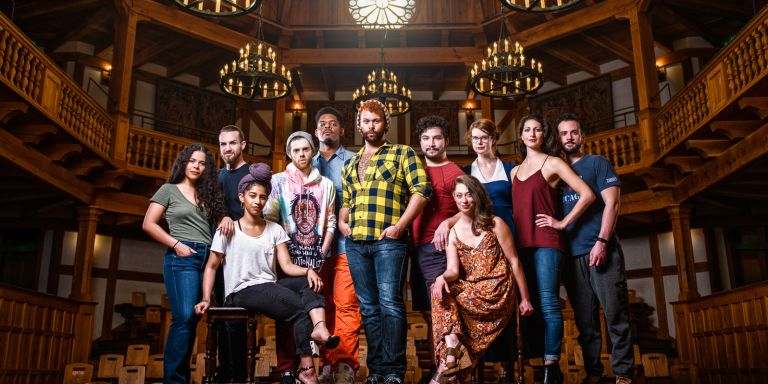 The 2018/19 Hand of Time Tour is bringing productions of The Comedy of Errors, The Winter’s Tale, and the Greek tragedy Antigone up and down the East Coast and across the Midwest.