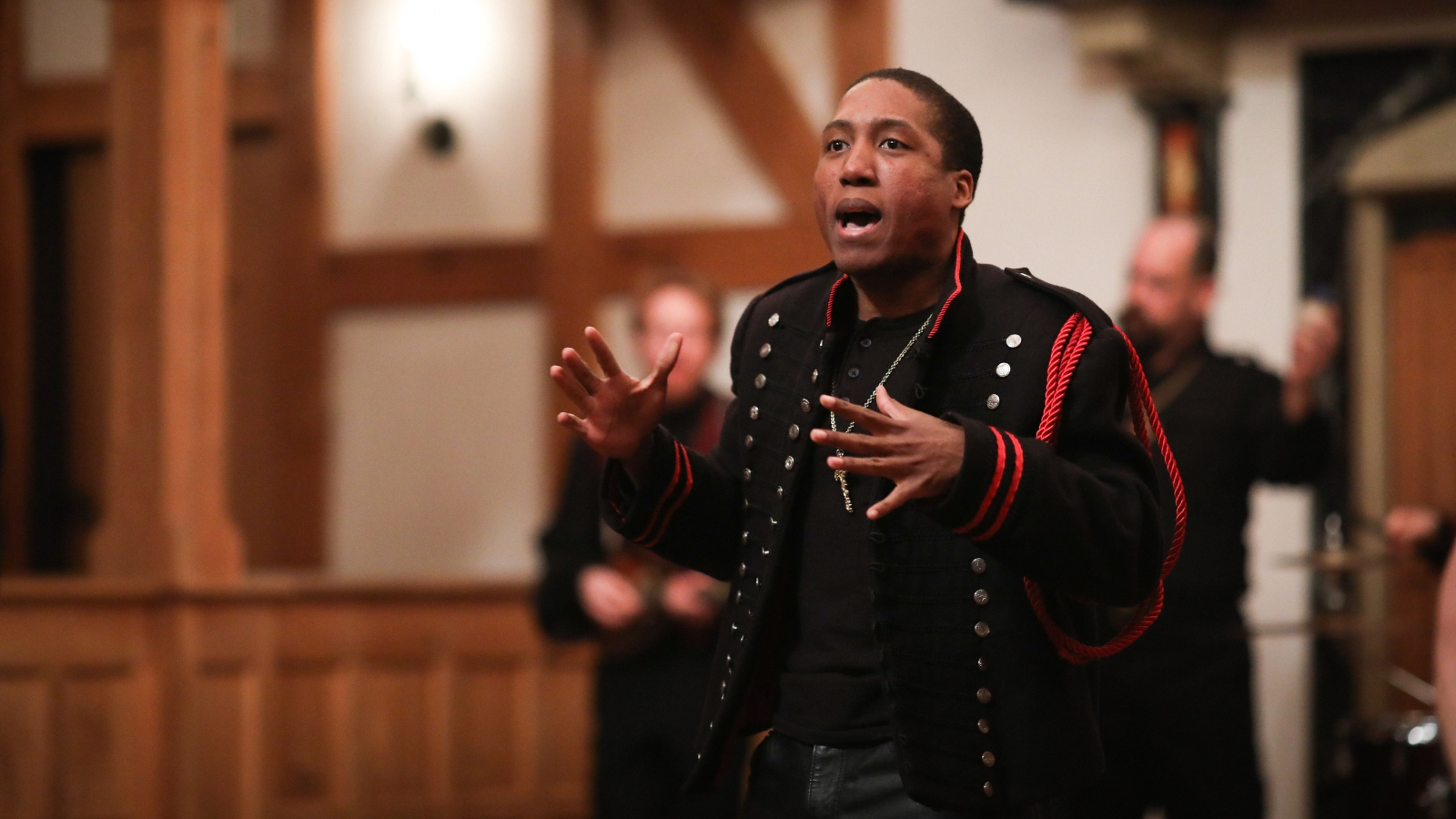 I’m from St. Louis, MO. I’m part of the University of Houston mafia that has been drafted by the ASC. Our school is one of the stops on their audition tour and they saw my miraculous talent and just had to have me.

Was there a particularly challenging role to prepare for this season, and if so, how did you approach it?

The most challenging role for me has been Slender in The Merry Wives of Windsor. I came in with a bunch of ideas of how I wanted him to be and with tons of bits and gags. Then I saw what the rest of my ensemble was doing and quickly surmised that we couldn’t ALL be outrageous clowns. So in our short rehearsal process, I started adapting to make him funny in a way no one else on the stage was. I wanted to fill in the gaps with a kind of comedy the audience wasn’t already gonna get from other characters.

Hotspur (Henry 4, Part 1) is easily the role I’m most excited about. When I auditioned for Ethan, I told him, “I’m your Hotspur. I see something in his text that I don’t tend to see in performance, and I want to change that.” I wanted to show the audience that he isn’t just a rage monster, but instead is a deeply sensitive man who has had to use his physical abilities in life for both survival and advancement, and that when he is not in battle, it’s hard to turn that switch off. I want audiences who are unfamiliar with this play to not be sure who is gonna win and possibly to be upset when they see who does. Two heroes; one victor.

Tell us what happens in Henry 4, Part 1 in 5 sentences or less.

Henry IV backs out of promises made in Richard II and in the interim between that play and this one. The Percy clan plan a rebellion to put someone more honorable on the throne. Prince Hal, Henry’s son and next in line for the throne, parties the days away with Falstaff and his crew. Hal is called upon to become what he was always meant to be. They fight.

This play is a comedy until it isn’t. The first ¾ of this play is fun and rowdy and a good time. The fights are badass! (Can I say that? I said it. They are). Pay close attention to the relationships and see who and what makes characters behave in ways abnormal to the rest of what they present during the play. And meet the infamous Falstaff!!

Anne Page Hates Fun is gonna bring a truly contemporary show to the Blackfriars stage and I think audiences will be refreshed by it and excited for this project as it moves forward. It is truly something no other theater is embarking on. We love the classics here but we need to see if there is another Shakespeare out there just waiting for someone to turn the lights on for them.

What’s different about working at ASC compared to other theatres?

The audience is so gracious to allow for the intimacy that comes with the lights staying on. We are all telling the story together and it feels like when you’re in first grade gathered around the teacher and he/she’s asking various students to make wolf noises and others to chirp like birds and allowing for authentic reactions and ad libs and even though they are the only one who has actual text, we all are telling the story. That’s what makes the place special. Every show I have is different. However today’s audience decides they are gonna receive the play molds the kind of play they end up seeing.