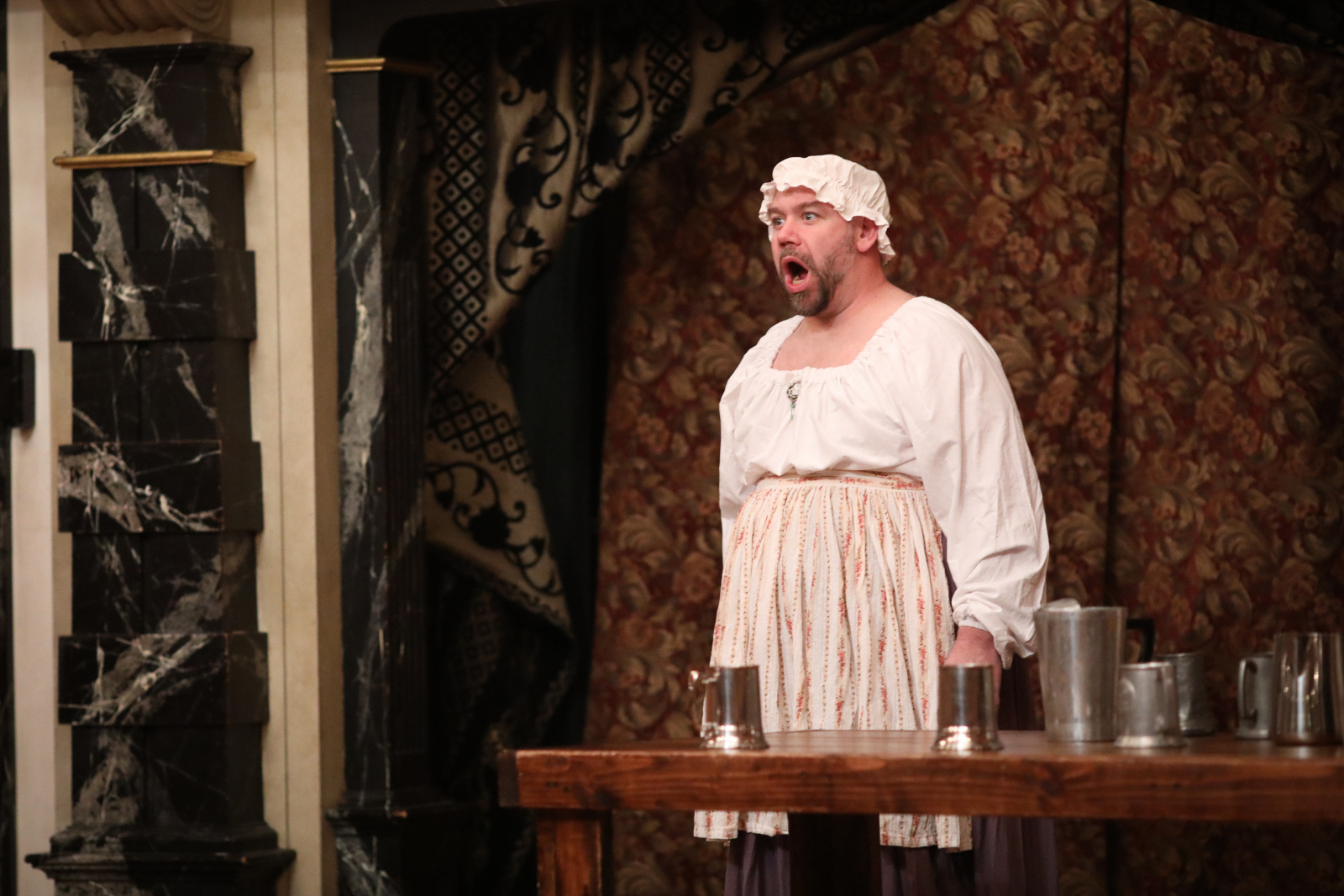 I was born and raised just outside of Chicago in Joliet, IL. I lived there with my mother, Sharon, and three sisters. My old job used to be climbing telephone poles as an installer and repairman for the Telephone Company. One particularly cold day, warming my hands on a telephone pole in below zero temps, I fantasized about what would I do with my lottery winnings. The answer was: I’d be an actor. And what’s the best kind of actor to be? A Shakespearean! That night I googled “Shakespeare School”, and Mary Baldwin popped up. I applied, and was accepted to the new Shakespeare and Performance Program…on Academic Probation. As I remember, Dr. Frank Southerington said to me “You don’t qualify in any way on paper…but we think it might be fun to let you try.” I’m particularly proud of my blue-collar background because it gave me the tools to work hard at whatever I do. Dr. Ralph Cohen and Dr. Frank Southerington gave me an opportunity to do what I loved. While at Mary Baldwin, I was introduced to ASC, and the rest is hard work and help from my friends.

Yes, but not for the reason people think. In Anne Page Hates Fun, I have to wear a wig. I’ve been shaving my head since 6th grade. The longest hair I’ve had since then is on my face. So, the costumer says something like, “It’s a wig, just treat it like hair.” I have no idea what it feels like to have hair on my head! It sounds silly, but it’s true. And learning to put on my makeup was fun…but getting it off is impossible! If you see me about town after any production of Anne Page Hates Fun, I promise you, you’ll see what I’m talking about.

I was particularly excited to play Mistress Quickly (The Merry Wives of Windsor) and Janice Sanning (Anne Page Hates Fun). I’m a graduate of Mary Baldwin (which at the time of my attendance was not co-ed, except for the grad program), I have been a professor at the primarily female identifying Hollins University, and I come from a family raised by women. I believe, and I’ve preached to my students, that the job of an actor is not to play the gender of a character, but rather the soul of a character, the essence of a character. And that’s an easy thing to say, because I haven’t had to play female characters until now. So, this season I get to explore things that a director would never let me get away with, for example, keeping my beard to play Mistress Quickly, and later in the run, contrasting it with a beardless Mistress Quickly. I don’t have anything profound to say about my explorations yet, but especially in today’s climate and my family background, it has been fun to make daily adjustments to the roles I play, and continuing to meditate on how to serve the play and tell the best story for the audience. Playing women has helped me think about it from a new perspective.

In The Merry Wives of Windsor and in Anne Page Hates Fun, you play maternal figures who are at the heart of storylines. How are those characters similar and how do they differ?

These characters are so different to me. In The Merry Wives of Windsor, Mistress Quickly is going back and forth, conspiring, collecting money from different suitors for Anne, she’s the mouthpiece for married women to help trick Falstaff…she’s in the mix, thinking on her feet, and helping the joyous chaos.

Janice is much more of a fixture in her town, her marriage, and her love. She supports everyone including Aaliyah who is protesting marriage, but she is wise enough to ask if Aaliyah is “protesting marriage or your father’s idea of marriage.” I also want to mention the contributions of Calder Shilling who plays my husband, Boyd, in this play. Boyd is essential to Janice. It was fun to figure out these characters with each other.

You played Falstaff in the Henry trilogy several years ago. What’s it like watching John Harrell in that role?

First: I love John Harrell. I requested to sit by him in the dressing room. But you’ve got to understand, we don’t approach anything the same way. If he’s quiet, I’m loud. He’s tall and thin, I’m short and stout. He plays music and reads books, I win collisions and talk trash. He says something smart, I say something vulgar.

My official answer is: It’s an understatement to say I was curious as to how a man so different from me would approach a character so close to my heart (I have two Falstaff tattoos on my body!). To no one’s surprise, John has asked questions about this character I never thought to ask. John has a unique commitment to storytelling and excellence, and I’ve already learned so much, I’m thankful to be in the cast, because I get to see the evolution of HIS Falstaff. Which is cerebral and a charming combination of being simultaneously self-aware and clueless.

What number season is this for you? What keeps you coming back?

This is at least my 10th season with ASC. The foundation and the principles this theater was built on by Ralph Alan Cohen and Jim Warren and long ago by William Shakespeare are second to none in the world. Working the way we do helps encourage the actors to have ownership over their choices and that ownership helps tell the story to our audiences. Plus, working in Rep (repertory) is a great gift that showcases our actors’ talents. But what I truly love, year after year, is the audiences. I used to greet audiences, and I would meet a couple who came to see that show from Baltimore, and a year later, that couple would come back, and they’d be with another couple from North Carolina. And the next year, each of those couples with bring friends and before long, I’d know a complete row of people from all over the US. The theater grew in my years here, and what we do would not exist without the audience, and watching them watch us, that’s what keeps me coming back…but it’s because the lights are on, I get to see them, and appreciate them.

I would also like to mention under this question that I was on six consecutive tours for the ASC, and I just recently got to spend a short stint with the current Hand of Time Tour. Touring years with this company are some of the greatest in my life so far, because for eleven months of the year around the US, we open a show for communities that don’t have a Blackfriars Playhouse in the center of town. Those audiences also keep me coming back: St. Lawrence University in Canton, NY; Murray, Kentucky; Burlington, VT; Akron, OH, and so many more beautiful places and beautiful stories, some of those communities know us because of our history more than we will ever know them.

Why should people see the shows in this Actors’ Renaissance Season?

I want to mention each of my castmates as reasons to see the shows during Actors’ Renaissance, here are some highlights:

Shakespeare wrote Shakespeare
My motto is: Always go to bed tired.
I refused to be haunted by unturned stones.
And the word of the year is: Soul.