Our mission drives our work here at the ASC, and the word of the year (so far) comes straight from the promise we make to ourselves each day that we come to work:

“The American Shakespeare Center recovers the joy and accessibility of Shakespeare’s theatre, language, and humanity by exploring the English Renaissance stage and its practices through performance and education.”

We believe that Shakespeare is accessible. To everyone. We think that some of the ways he has been presented to the public and students through his 400 year old history belie that notion, but we know that, with some pretty simple tools (which I will discuss below), audiences can thrill to his language, identify with the characters he created, and find joy in the feeling that they get it.

Since January, I have had the enormous privilege of working, or rather, playing with a group of young people who are in the autism spectrum. Every Tuesday afternoon, we get together and see what we can create together. We play theatre games, tell one-word and one-sentence stories collaboratively, and figure out what strengths each of us brings to the others. As challenging as these students’ lives are when they aren’t with their peers in ASPIRE, when we are together, we find a lot to value and enjoy. Tomorrow, they will come to the playhouse and see where the professionals do their work (or, play). Just as our work with the Parks and Recreation department this spring is teaching us, children are ready and eager to tackle what Shakespeare’s text offers, and to learn about themselves by investing time in collaborating with others. Here are some of the approaches we are taking to keep Shakespeare available to these groups, and to teachers, and to superfans, and to our fellow theatre lovers and practitioners. 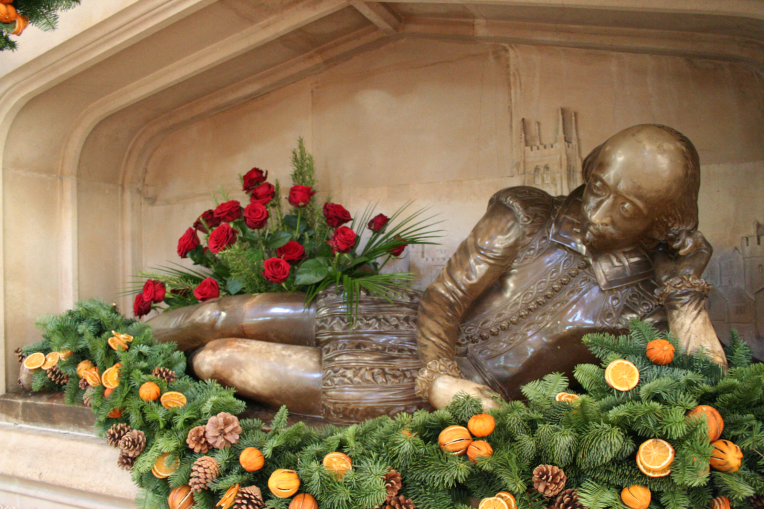 NO!  Shakespeare worked for a living (he liked money and saved enough to buy the second biggest house in his hometown). He worked in the theatre. He wrote for specific people, people he knew. They were his collaborators, maybe his friends. He lived in an apartment near work. He was litigious as all get out. He had a wife and children–one of whom passed away as a child. He felt the effects of politics (see Aubrey’s article on rhetoric and living under a female monarch). He commuted long distances. While he had Hamlet say “He was a man take him for all in all, I shall not look upon his like again,” we can rest assured that we have seen his like and can hope to see more who are excellent collaborators, who think speedily and with structure, who appeal widely across neuro-, ability-, socially-, or culturally- diverse populations.

Because of how they have been exploring this relationship in the play, I knew that I wanted to work with the scene when I had the chance. Or, rather, I knew I wanted to give some students the chance to play with it. So, we talked about rhetoric (see ROADS to Rhetoric in our ASC study guides and our cards available here), embedded stage directions, and audience address, and then the students huddled and gave suggestions for specific moments in the scene (see the Google Doc worksheet) . They encouraged Katie to seize the opportunity given by her character’s word choices (leave, lay) to reveal her intent a line or two earlier than she had been–reinforcing the big choices she’s already made. They suggested that Carter take a line to the audience “Who? I rob? I a thief? Not I, by my faith.”, creating a moment of alliance that let the audience into the story a bit earlier. These, and other suggestions the students came up with, changed the scene in subtle and not-so-subtle ways and created moments that excited audience and actors alike. As we discussed the outcomes at the end of our session, we realized that the hour long workshop was more time than the scene had in all of the rehearsal prior to opening. And the choices the students came up with were valid and were valued–and, who knows, were maybe even deployed in the show later that night.

I hope this month will be an opportunity to think about the ways you are like Shakespeare, and the ways your students can own his plays. And, also, that you’ll think about coming back to the playhouse while the ASC actors are in their element and running the show during our Winter Season: The Actors’ Renaissance. It is something to behold. Something not to be missed.

Sarah is the Director of Education and holds a Master of Fine Arts and a Master of Letters from Mary Baldwin’s Shakespeare and Performance Program.