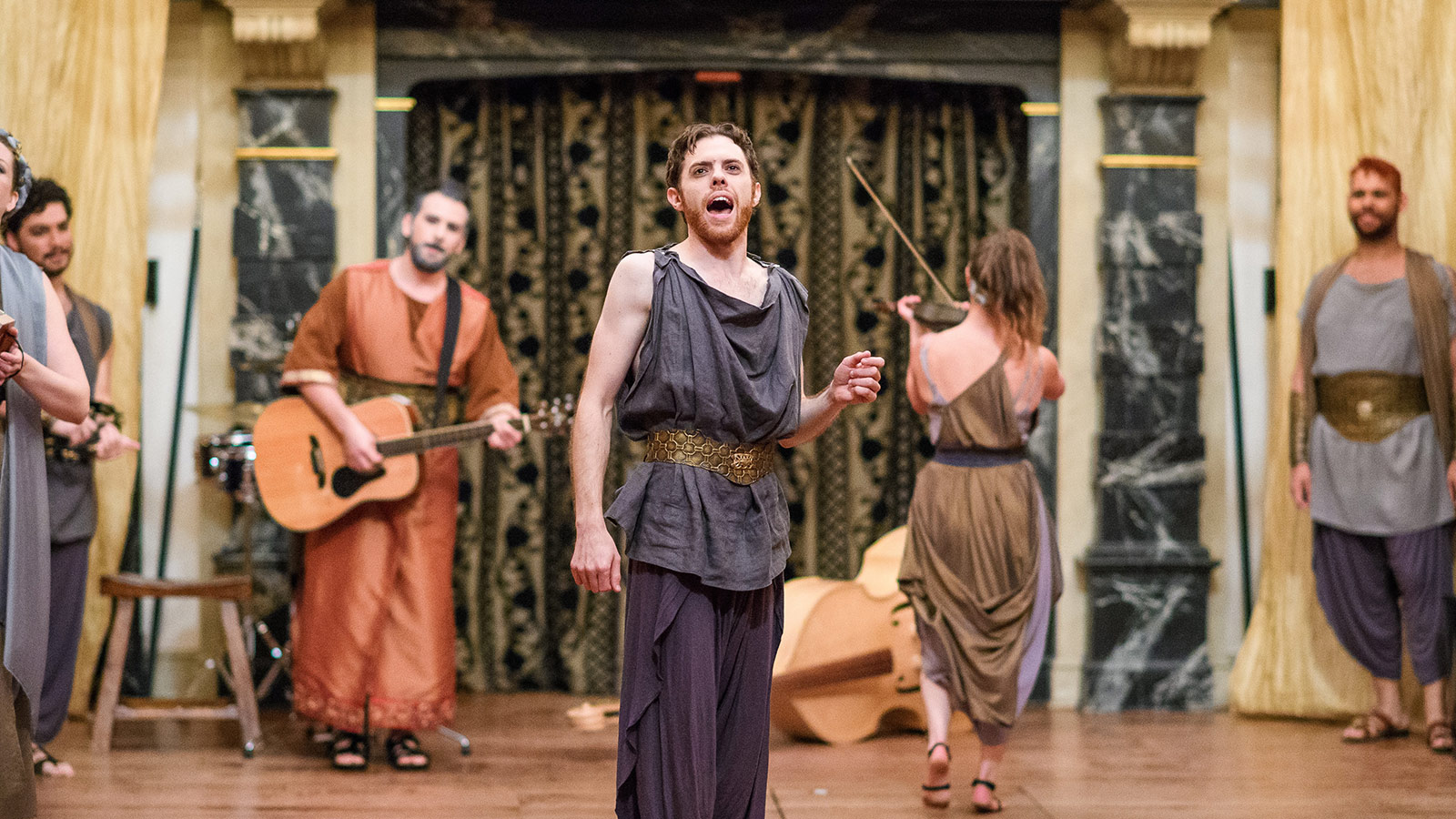 This piece was born through an offer and a question. Knowing that Antigone is a rhythmic, song-like, language-heavy piece, I offered my skills as a rapper/writer to Doreen Bechtol (our director) in case it was something she wanted to explore with the chorus—hip-hop-inspired rhythms/tactics/skills. Doreen told me she’d been thinking about opening Antigone with the story of Oedipus, Antigone’s father, and that a rap song might be the perfect way to tell that story—and could be a nice way to bridge the gap between our pre-show (live acoustic music) and the first scene of the play. She then asked if it’d be something I’d be interested in, or even capable of doing. I, more than excited, replied yes, yes, and ever yes.

Constance Swain (Antigone, co-fight choreographer/director, dance choreographer/director), suggested the song “Tribes at War” by Damian Marley & NaS featuring K’naan as a pre-show song that could lead into the show, and I decided to use that song as the instrumental and inspiration for our Oedipus story. The end of Tribes leads perfectly into a brother’s fight to the death—which is essentially what starts our play—and our goal was to have something that gave the audience all the knowledge they needed to know for the characters they were seeing for the first time.

The most difficult part of writing it was editing the story to fit the time we had. There’s so much more information—about Megareus, Creon’s son, about Antigone traveling with Oedipus to Colonus where Polynices (a son of Oedipus) approaches him about the upcoming war, and Oedipus decides where his body will be buried—but I tried to keep it down to what was absolutely necessary for the story of Antigone, which isn’t Oedipus’ story at all. What is going down in our play is directly because of what happened to Oedipus, though, so it hurt a bit to not include everything.

What’s exciting to me as a rapper/writer/theatre-maker, especially since Hamilton’s success, is that the theatre world is starting to recognize, en masse, what an extraordinary storytelling tool hip hop is. The genre started in rebellion, in a way, and quickly grew into a way of telling stories in a heightened form of language. I think the best rappers of today rival the language skills of these 400-year-old plays, and a good way to make older poetry relevant is reworking it to fit our modern day idea of poetry —which hip hop is at the heart of.

The Chorus members speak six odes in our play, which are more or less stories/point of views/discussions on either what is happening at the present moment, or what has happened. I thought if we could place this opening song in the world the odes were happening in, we could begin the play before the actual texts and allow for the audience to be truly engaged in the first scene (an argument between Antigone and her sister, Ismene, about whether Antigone should bury her dead brother’s body or not on penalty of death). Hearing the story of her father, then seeing the death of her brothers and the city’s refusal to bury him because of Creon’s decree right before you hear Antigone and Ismene’s argument changes the way audiences experience the first moments. It allows you to focus on characters during the first scene, rather than trying to understand exposition, so you already have a point of view, quickly empathize with Antigone, and easily follow the argument.

I’ve written original songs every year since I started working at the ASC. Some pre-show songs; “Here’s To My Love” (music by Ronald Romàn-Melèndez), where lines from Romeo and Juliet were arranged into a love song; “Love” (co-written by Kyle Powell, music by JC Long, Cordell Cole, Ronald Romàn-Melèndez), two different points of view on love based on Proteus and Valentine; “Believer” (by Imagine Dragons), in which I wrote a rap into that was focused on the events in Macbeth; and “We Run Verona” (music by Ronald Romàn-Melèndez, Ross Neal, co-(mostly)written by Kyle Powell), a rap battle between the Capulets and the Montagues.

But this is the first time the song has been more play-oriented than song/rap-oriented, and it’s definitely the first time it’s been considered in-show music and continues directly into the show. I’m thrilled for the opportunity to be an actor inside the show, as well. Getting to see others perform my words with such skill, and experiencing the audience’s reaction to the story, has been a glorious gift.

THE ODE OF OEDIPUS

VERSE ONE
In Thebes there was an Oracle, that Oracle predicted –
King Laius, your first born son will be inflicted
with a curse far worse than lain upon any other –
He will kill you, his father, and then marry with his mother.

So the King sends his son, Oedipus, away to die
in the country, but lucky, a Shepard passing by
at just the right time takes pity and he saves him,
but when he got older he embarked to where he came from.

He finds out the prophecy in a city which he lands,
deciding he can never go home, he leaves behind his fam.
He continues on to Thebes thinking that he’s beaten the curse,
but meets on the street, fights, and kills a man first.

He arrives in Thebes to find it plagued by a Sphinx,
who kills all who can’t answer his riddle: “Now think;
what walks on four legs in the morn, two at mid-day,
and three at night?” “A man.” “You have spoken right.”

Oedipus cures the ills, saves the city, wins the crown
and the widowed Queen, he decides he’s gon’ stick around.
They had four kids, and the list it be –
Eteocles, Polyneices, Ismene, and Antigone.

VERSE TWO
A plague strikes Thebes and now Oedipus compelled by
Curing the curse – he sees the Oracle at Delphi –
“He who killed King Laius must be found
else no plague shall escape this town.”

He searches, he recovers, he collects, and he discovers
it was Laius that he killed, when he got in that fight
and it got a little bit real, but if he took that life
it was his father that he murdered in the cover
of the night, tore asunder, his soul smothered, once he uncovers
cuz under it that means his mother is his wife.

And when he finds out – he goes ballistic
gouges out his eyes, his mother/wife, she kicks it,
daughters follow their father, exiled misfits,
Creon, his brother-in-law is left with enriched gifts –
Regent was he now, but now the brothers are alone
as Antigone takes Oedipus to lay to rest his bones.

CHORUS – [lyrics by Damian Marley]
Tribal war, we don want no more a dat.
Every man deserve to earn, and every child deserve to learn, now.
Tribal war, and from that we’ll defend-

VERSE THREE
Antigone returns to Thebes, and to Haemon,
her lover, but returns now to find that the station
of King Creon’s taken, worries this is base and
finds out a war broke out – her mind’s racin’.

“Your brother Polyneices gathered up some great men
to attack Thebes and take down the place in’t.”

“While Eteocles fights for his placement,
still serving Thebes, as he claims should his base kin”

Civil war twixt bloodlines where the blood lines
blur when they spilled on the grass and the pavement.

ASC on Tour returns to the Blackfriars Playhouse this April for the Spring: Tour Homecoming Season. 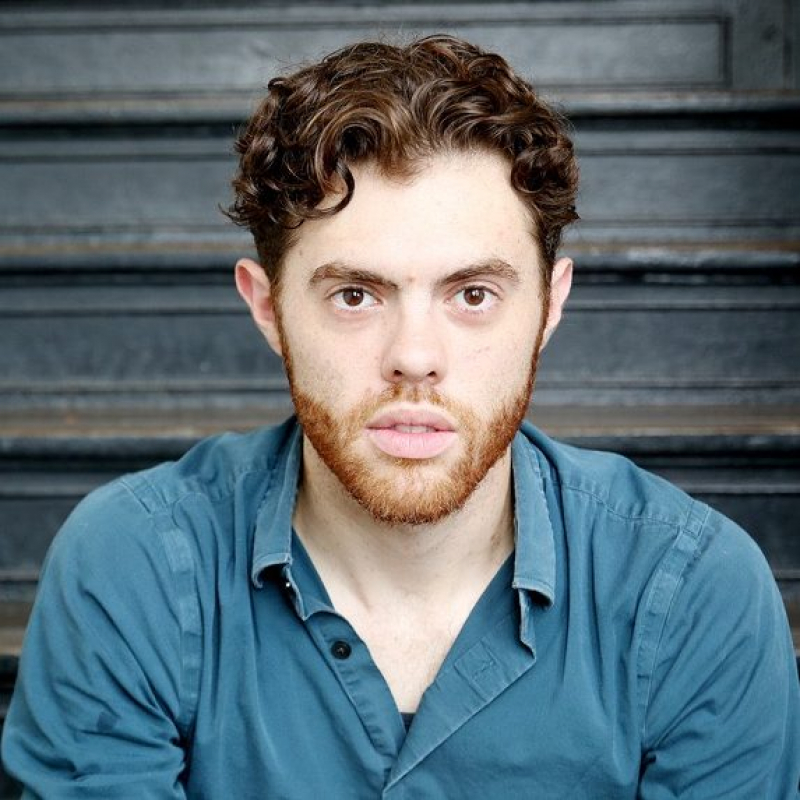 ASC on Tour actor, appearing this season as Florizel, Cleomenes in The Winter’s Tale; Haemon, Chorus in Antigone; Antipholus of Ephesus in The Comedy of Errors.