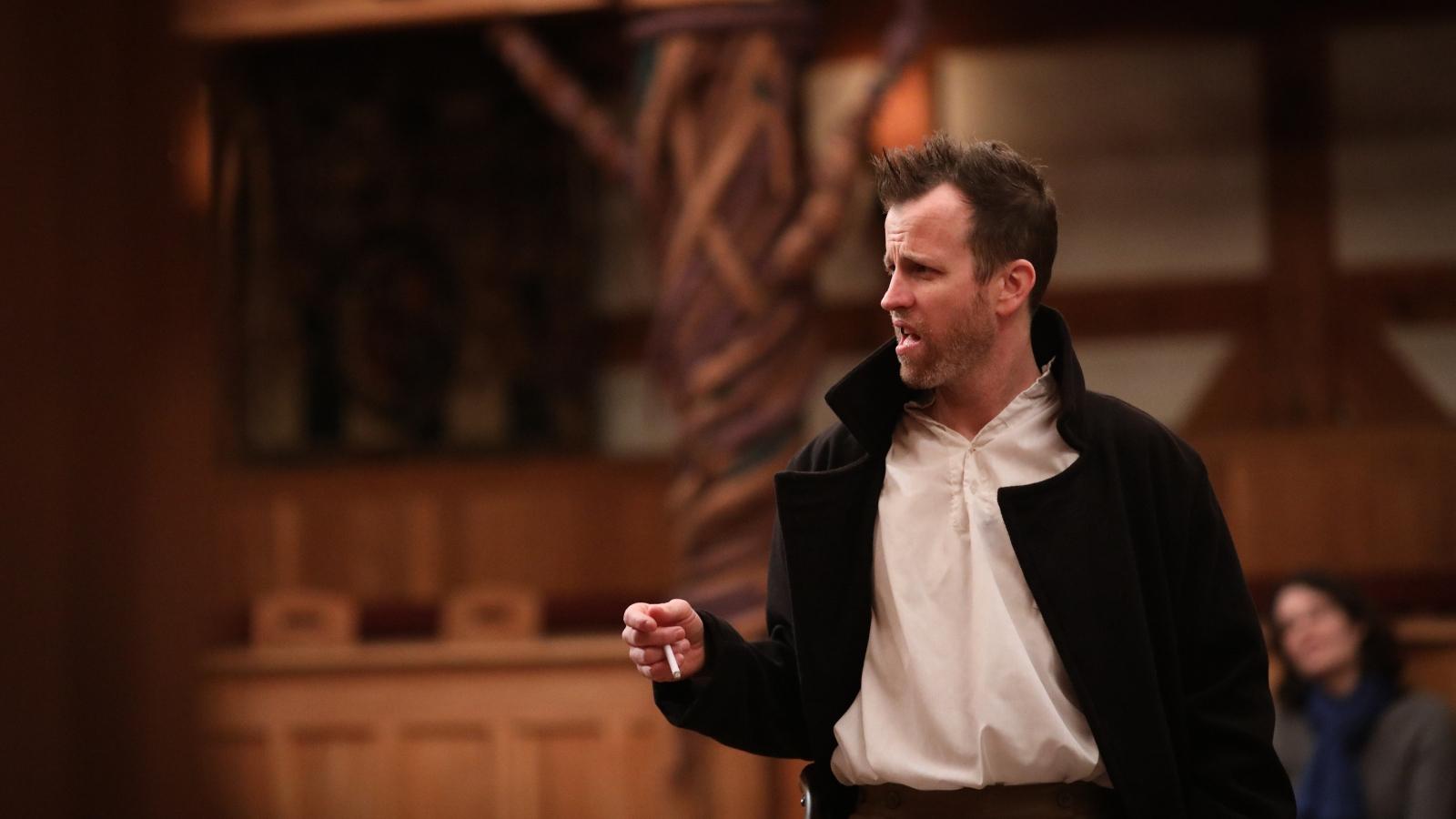 I was born in Salt Lake City, Utah and attended the University of Utah Actor Training Program. One of my teachers/directors (Jaq Bessel) had come out to Staunton to look at Mary Baldwin and Blackfriars Playhouse. When she came back, she told me of this amazing theatre where you could play music and do really wonderful work. Jaq thought I would thrive in a place like this and convinced me to come out and audition. I came out and immediately fell in love with the theatre and the town. The rest is history.

You’re approaching the end of your first full season as an Actor-Manager for Music (congrats!). How has your new title affected your approach to the Actors’ Renaissance? What kind of prep work was involved in your new role?

I wanted to make the music pop this season. We have such a talented group, I knew we could do some incredible things. The music for the fight scenes in Henry IV, Part 1 was the first thing that I worked on. I wanted to create a soundscape that would fill the world of the play and highlight the text and the combat. I feel that with the new job title I’ve been able to focus more on a cohesive sound for each of the shows.

What roles were most exciting to play this season and why?

Black Will in Arden of Faversham. I look forward to playing roles that I know very little about. Having never seen Arden, I didn’t know how he was going to fit into the world of the play. I love starting from scratch with a character. The discoveries we found in rehearsal didn’t disappoint.

Tell us what happens in Merry Wives in 5 words or less.

Music takes the stage front and center at the Band Candy Benefit Concert. As the Music Actor-Manager, what goes into putting together the Band Candy Concert? What should audiences be excited to see at this year’s concert?

Putting together the Band Candy Benefit Concert is a treat. Every year we have done Band Candy it has been different. Some years, we know what songs we are gonna do for the concert before the season has even started. Other years, a song will sound so good in the space, or just be so fun to play that we have to do it for the concert. I work with Director of Development Kelly Burdick and Tour Troupe Music Captain Ron Román-Meléndez, to make sure we are all on the same page with logistics, fundraising, and sound. Then we hope it all comes together on the night. This year, Ron and I want to do a song together, a special one-night-only tune. You’ll have to come if you want to hear it.

John always wants to make sure that we know what we are saying, and that we are saying it in the most clear way possible. Working this way we can take the time to craft the good jokes and let go of the bad ones. By doing this over the years we have created a great shorthand in rehearsal. We always bounce ideas off each other, “Is it funnier if you pick up the dead bird, or should I?” John is really good in understanding how lines fit in the musical notes of our storytelling. I know that with any line I send him, he is going to respond to it in a way that keeps the ball in the air and the story engaging.

What is your favorite moment, from rehearsal or a performance, in this season?

Every time we play our This is How We Do It/DNA. Mashup for student matinee crowds during Henry IV, Part 1 pre-show music. The kids go crazy for it, they lean forward on their seats eager for more. I love the connection we get with them during that song.

I can’t wait for John and Miriam’s album to come out!