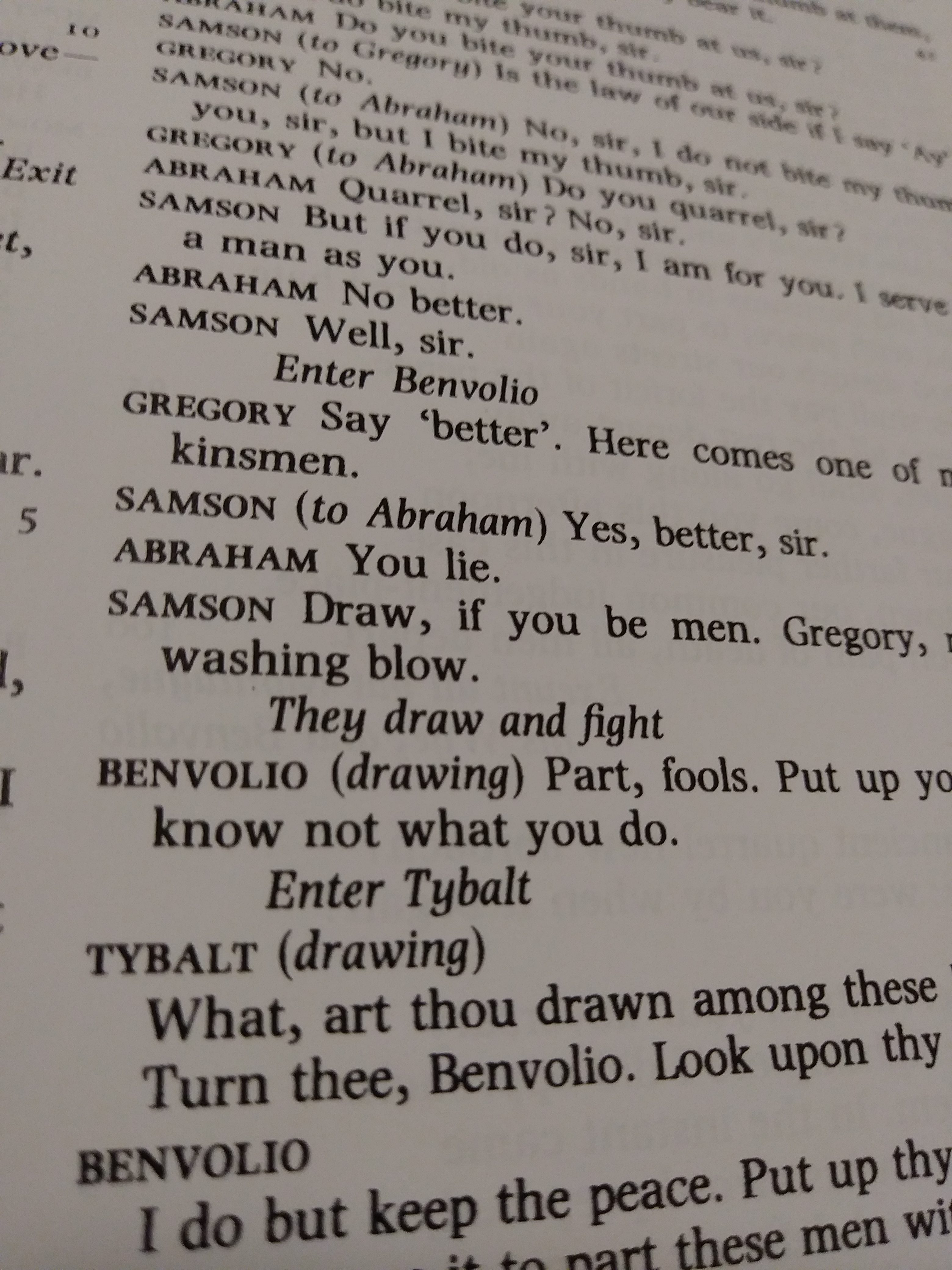 Today, the cast began with veiwpoints in order to discover their characters’ movement. Following, we blocked the final tableau of play, before breaking into families and discovering their shared stories. The rest of the day was spent in textwork, especially pairing Romeo and Juliet and the two opposing sides from I.i.

From the play (something that stood out to you particularly today)

“Say better, here comes one of my master’s kinsmen.” -Gregory, Act I scene i.

From the director (can be poignant, funny, or anything in between — can also be more than one, but keep it to three or fewer)

From the cast (same as above)

Today, one of our cast members pointed out an interesting textual anomaly. On Benvolio’s entrance, Gregory pushes Sampson to attack the Montagues by saying “say better, here comes one of my master’s kinsmen.” What doesn’t make sense here is that Benvolio is a Montague and Gregory is a Capulet. Why then does Gregory say his “master’s kinsman” is approaching? Several theories have been advanced by different productions, if the discrepancy is noted at all. Some direct Gregory’s line at Tybalt, whose entrance is then changed to earlier in the scene. One production makes Gregory mock the Montagues by sneering the line at Abraham. My own personal favorite explains the discrepancy by means of class: Gregory actually misidentifies Benvolio as a kinsman of his master on the grounds of his dress and obvious social difference. This goes along with the earlier line in the scene (paraphrased): “The quarrel is between our masters and us their men.” Other theories advances are that a textual error was made in having Tybalt enter later, but these barely hold up when check with the original texts of R&J. Quarto 1, printed in 1597 and greatly different and shorter than the later 1599 Quarto 2 text, on which the modern text is built, still has Benvolio’s entrance separate from Tybalt’s and earlier. This may have been the source of the confusion, since neither Benvolio or Tybalt speak in this portion of Scene i in the first Quarto. It still fails to explain why in the expanded Q2 text that Benvolio’s entrance is the catalyst of the brawl. Regardless of which solution a production chooses, the question remains, and illustrates what makes textwork so important in these plays. Where it may be shrugged off as an error or even ignored, looking closely leads to not only a radically different reading of the individual characters who begin the play but the reading of the play as a whole.