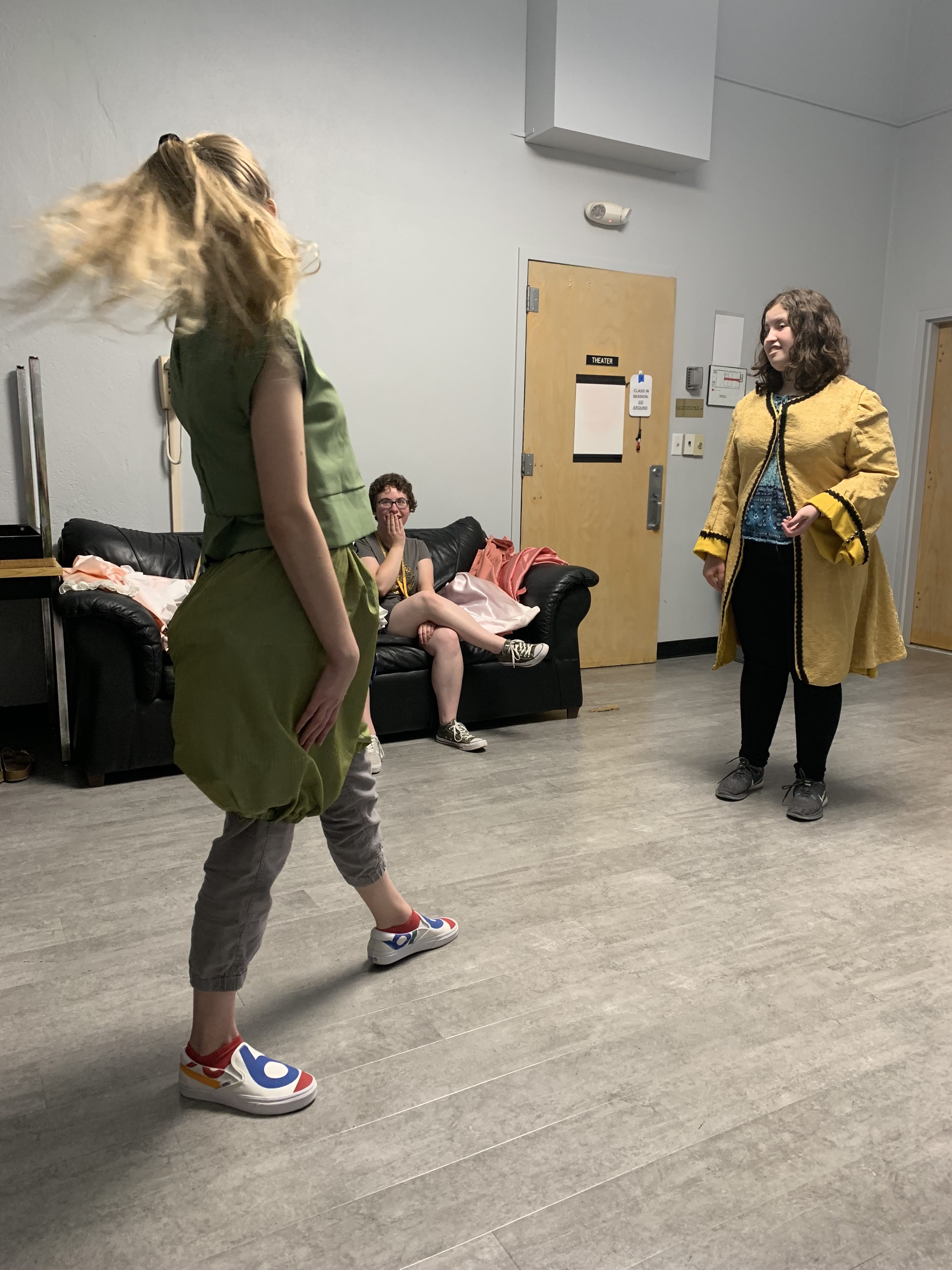 Today, our clowns had the privilege of working with clown master Aubrey Whitlock. What’s more… we played around with some costumes! First, we explored the physicalization of our characters’ names. You can imagine what Pompey the Great (Lizzie), Elbow (Hope), Froth (Dagny), and Mistress Overdone (Mariana) discovered about where their characters hold their clowns in their bodies. Shakespeare, we are reminded with basically every line, was, indeed, a very naughty varlet! The rest of the group continued working on blocking until the clowns returned to the rehearsal room for a clown fashion show. Then we incorporated our clown work into the blocking and reviewed all of our blocking from the week. It was a day full of elbows, big butts, and stewed prunes!

“Once Sir? There was nothing done to her once.”

“It’s about responding to EVERYTHING in the room at the same time.”

– Aubrey Whitlock on the art of clowning technique.

– Hope Napier (Elbow/Abhorson/Juliet) on Froth’s puppy-like propensity to fall asleep in the middle of scenes.

Clowns are perhaps the most challenging characters to play in Shakespeare’s canon, but not just because their jokes are archaic and obsolete. Of course, sometimes there are words that just won’t make sense unless you’ve got a lexicon handy (looking at you, stewed prunes). But I’m of the belief that most of the clown’s humor is unlocked with the actor’s body. The text that would otherwise be “archaic” on a flat page immediately becomes so much more relevant when it’s siphoned through the actor’s dynamic form. It is in this way that clowns remind me of how central our bodies are when we tell stories – one of the reasons I, a theater locust, decided to major in Human Biology. Our bodies are our primary instruments, and clowns know how to play them to their beautiful extremes. It is not surprising then that clowns – the people who are most comfortable in their own bodies – are also the wisest citizens of their societies. While the characters around them are stuck in ingrained social norms that restrict their bodies or their minds in some way, clowns actively break those social norms – through their bodies – in a way that tells the story and is critical of the world in which the story takes place. In other words, the clown is the only one who is socially allowed to inhabit a totally free body in Shakespeare’s plays. The official clown (I say “official” but there are definitely other less, shall we say, self-aware clowns) in this play – Pompey – is a perfect example of textual cues for embodiment. When Escalus (Sophie) asks Pompey (Lizzie) for his surname, Pompey replies “Bum, sir.” Escalus thus concludes, “Troth, and your bum is the greatest thing about you, so that in the beastliest sense, you are Pompey the great” (2.1). For an actor, this is a GOLDEN indicator that Pompey has a special relationship with his bum! I wonder what more we’ll learn about justice and liberty in Measure for Measure from Pompey’s freedom of movement in the next couple weeks.