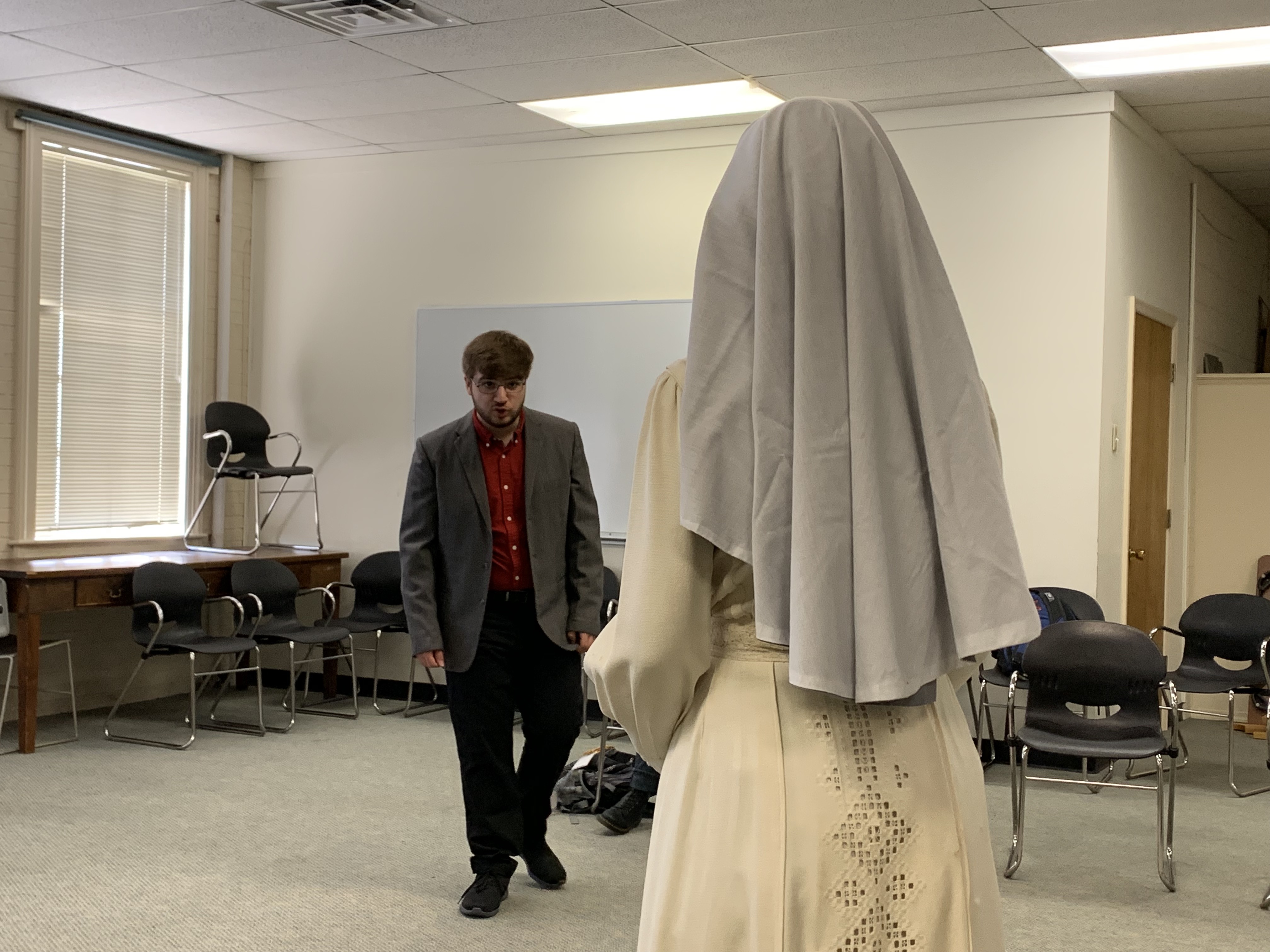 Today, was a mega-session on a mish-mash of different scenes. We started with a deep comb through Act 2, Scene 4, while the rest of the cast worked with our ADs on lines and extra blocking work. Then we jumped to deep combs of scenes in Acts 1 through 3, cleaning blocking and practicing being off-book.

“Nay, but hear me,/ Your sense pursues not mine; either you are ignorant,/ Or seem so craftily; and that’s not good.”

“I think Angelo thinks everyone in the audience is rooting for him.”

“I’m the Horatio in this situation.” – Olivia (Isabella) on Isabella’s journey juxtaposed to Angelo’s in Act 2, Scene 4.

Act 2, Scene 4 is better known as THE defining scene of Measure for Measure. Isabella (Olivia) comes to Angelo (Topher) a second time to plead for her brother Claudio’s (Ben’s) life. Angelo agrees to do so but only if Isabella sleeps with him. The scene is an interesting one because so much of what happens in terms of motive change is silent. In other words, no reading or portrayal of Angelo will ever be fully textually supported. For me, this is the greyest area in the whole play. This is also probably why this scene is the most widely interpreted one in any production of Measure for Measure. For example, an astonishing number of productions include explicit acts of sexual assault in 2.4 (if you are interested in just what kind of range, check out Cheek by Jowl’s 2015 production or the Donmar Warehouse’s 2018 production). Ours does not. Isabella and Angelo never touch in our production. But the fact that, annually, most productions feature Angelo physically violating Isabella, in whatever way, is indicative of how “unreadable” his character is in this scene. At what exact point does he know that he wants Isabella’s body? There is no right answer, but my belief is that he makes this discovery mid-scene. Others might argue that Angelo knows exactly what he wants before this scene even happens. In his opening soliloquy, Angelo says, “When I would pray, and think, I think, and pray/ To several subjects: heaven hath my empty words,/ Whilst my invention, hearing not my tongue,/ Anchors on Isabel.” In many ways, this soliloquy suggests that he wants to ravish Isabella’s body – namely the words “anchors” and “inventions” as well as the kinky, enjambed first line about praying and thinking. What fascinates me (and why I believe that Angelo makes the decision somewhere in the middle of his dialogue with Isabella) is that I think Shakespeare intended for his audiences to observe a man in the midst of making this kind of a decision. This decision actually happens, as the #MeToo movement and others have bravely shown, all too often for us NOT to wonder how we could raise some men to do such things. What is the motive? What is the tipping point between seeing a woman as an equal human being and seeing the same woman as a body for one’s own pleasure? Having just watched the first Democratic primary debates, I was struck, once again, by the realization that political debate is just as much about what is left unsaid as it is about the fiery taglines and theses. There were so many instances in which a “yes” or “no” question was asked and the candidates refused to answer the “yes” or “no” altogether, pontificating at length instead. But it’s just that point I want to make: there is so much power in maintaining this grey area. And watching Act 2, Scene 4 today was not very different. Angelo leaves so much unsaid – perhaps because he literally doesn’t know what he wants. But there is certainly a point at which he DOES know what he wants AND continues to avoid articulating exactly what that is. Just before they part, he says, “Believe me, on mine honor, my words express my purpose.” Isabella responds with incredulity and repeats the same word twice: “Seeming, seeming./ I will proclaim thee Angelo, look for’t.” A part of me wonders if SHE is still caught in Angelo’s grey area, even at this point. The word “seeming” is an interesting one because it doesn’t altogether condemn him. Again, I question at what point Angelo knows what he wants from Isabella. But now, I question whether or not that is even the right question to be asking. We’re still, sadly, at a moment in history when seeing it (i.e. sexual assault and harassment) is often not enough to condemn someone (or remove them from the Oval Office). Shakespeare’s grey areas in Measure for Measure suggest that we might never be able to truly “see” or “prove” – using old methods and lawbooks – the roots of these “seeming” injustices. But that doesn’t mean we can’t prosecute them or listen to those who are brave enough to shout them into our systems of justice.