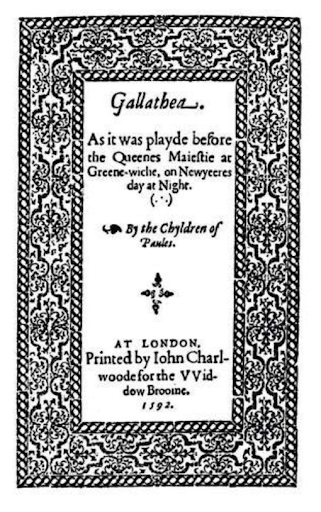 After a long day of auditioning, the cast of Gallathea assembled for our first read-through of the script and began to explore the play’s weird, enchanting world of shipwrecks, alchemists, goddesses, lovers, and forest-dwellers. We pronounced classical Greek names (Mel-ee-be-us? Mel-ih-bus? A bus?) and tackled the various, unstandardized spellings typical of 16th-century plays (Tityrus or Tytrus? Gallathea, Galatea? Or is it Galathea?). As we read the script aloud, we punctuated every scene with a quick crowdsourced synopsis (“Cupid ruins everything”) and titled each individually for future reference (2.2 is now “God Squad“).

“I understand not one word you speak” (2.1.158), perhaps the most relatable line in early modern drama.

“Are they lesbians? Are they Trans? When we try to place 21st-century labels onto them it is both fascinating and frustrating that nothing seems to quite fit.”

“He such a Renaissance millennial.”

Gallathea is unique among the Session 1 plays not only because of its authorship, written by John Lyly instead of Shakespeare, but for its status as a prose play. Whereas Romeo and Juliet and Measure for Measure are written largely in blank verse, aside from a few musical interludes Gallathea doesn’t have any meter. We began a discussion about how performing a prose play differs from a verse one and what our actors will be analyzing instead of iambs, trochees, and spondees: antithesis, alliteration, other rhetorical devices, and the unique performance opportunities of prose.