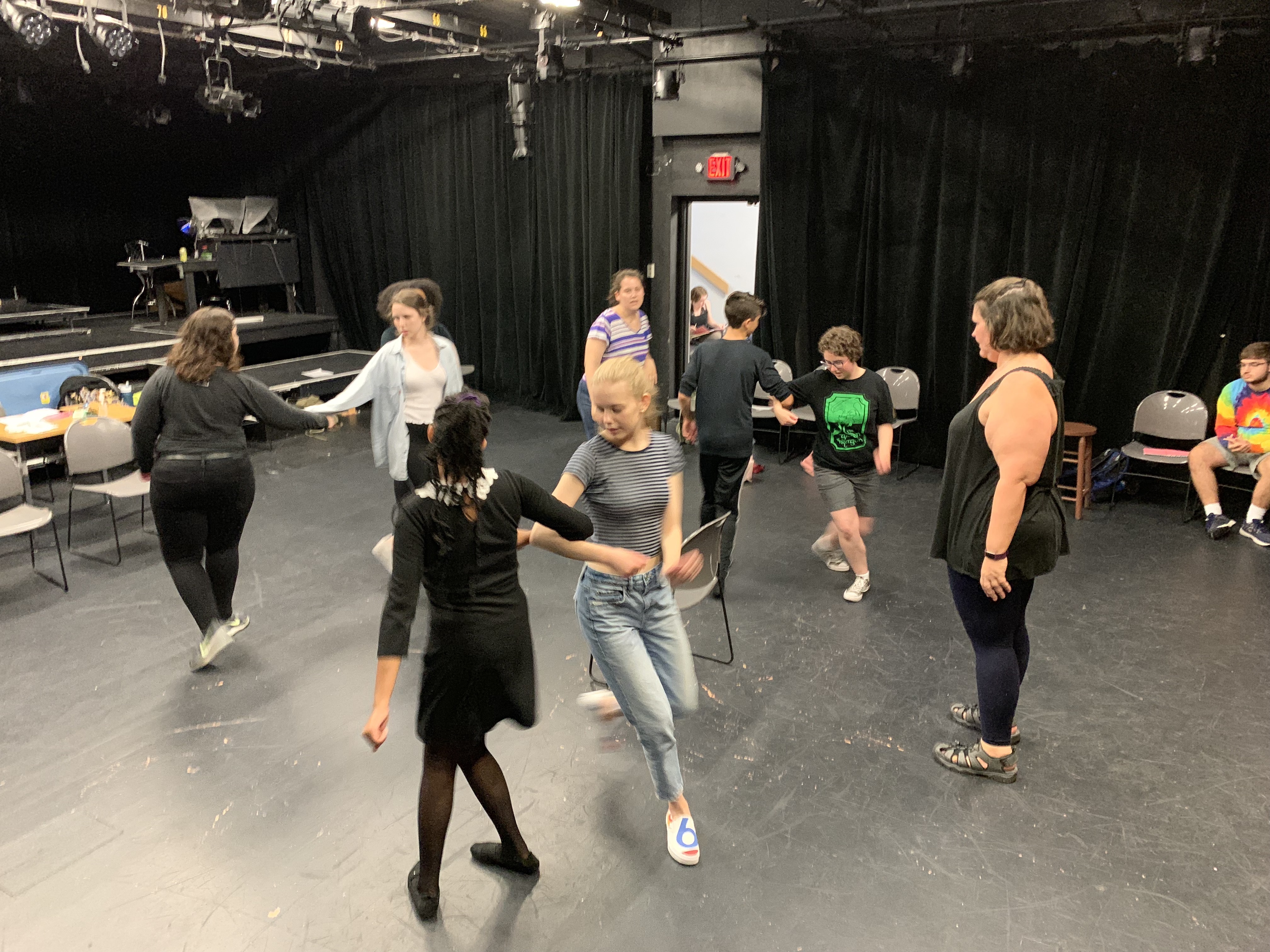 More micro-group table work and blocking through Act 3.2. We started today reviewing and adding more dance choreography to the opening number, continuing to hone the story of the decrepit pre-play world of Vienna. While we worked slowly through the scenes, the SM-Dramaturg team fitted and made final adjustments to our costumes. In the scenes, we particularly focused on the characters and interactions of the Duke (Bre), Isabella (Olivia), and Angelo (Topher), exploring the ways in which the Duke walks a very fine line between his disguises and sometimes slips by using the royal “we.” At the end of the day, we sent in the clowns for a few final moments of blocking.

“Say what you can; my false o’erweighs your true.”

“We say things to make us believe them.”

“None of this tomfoolery in my good Christian prison!”

Our director Emily recently shared a Washington Post article about Christine Blasey Ford with me. It was titled “It is very difficult to get the train to stop,” and, in it, columnist Alexandra Petri says, “It is painful to watch a woman caught and torn in the gears of a man’s progress. To watch the meaning of her name change into a thing that happened to her once. To watch the first sentence of her obituary get rewritten. To watch her name be linked to this man’s name.” Working on Act 2, Scene 4 – in which Angelo attempts to blackmail Isabella into sleeping with him – makes this article and our work on this show so surreal for me. Back in September, for that one week or so that the hearing enjoyed its shining moment in social media feeds before disappearing into the bowels of unpleasant human histories, I watched several of my peers perform a version of Measure for Measure that incorporated direct quotes from Kavanaugh’s and Blasey Ford’s testimonies. It was chilling, but not because of the uncanny juxtaposition between 400-year-old and day-old texts. It was horrifying because it was incredibly difficult to tell what was Shakespeare and what wasn’t. The #MeToo movement reflects, for me, a new era in the war against sexual harassment and sexual assault. And that era is new precisely because it has started to become recognized as a “war.” That word is not one I use lightly. It is NOT one to be interpreted as threatening, though minority rights movements have always been labeled so. Violence is, of course, never the answer. Which is why I find it interesting that violence is almost never used in Measure for Measure. The only textually supported violence is the cutting off of a dead prisoner’s head – and the dude dies of natural causes anyway. All the violence to living persons in Shakespeare’s Vienna is avoided… but at the cost of a “good” play, one that knits up the sleeve of care and ensures everyone gets married or dies at the end. I call it a “war” because, in war, there are no limits to the warzone. All bodies that are generally not those of white heterosexual cis-gender men are at stake – no matter where they are, what kind of roof (if any) they’re under, or whatever rights are technically granted to them in a constitution. Today, a woman’s body is a warzone. And in Measure for Measure, it is awful to watch how many a woman’s body (and even symbolically, the “overdone” city of Vienna) is used in the name of Justice. If our production does anything, it will make you hope that “Justice” – the same Justice that your society’s public institutions and governing bodies espouse – isn’t what the last scene of Measure for Measure suggests it is.