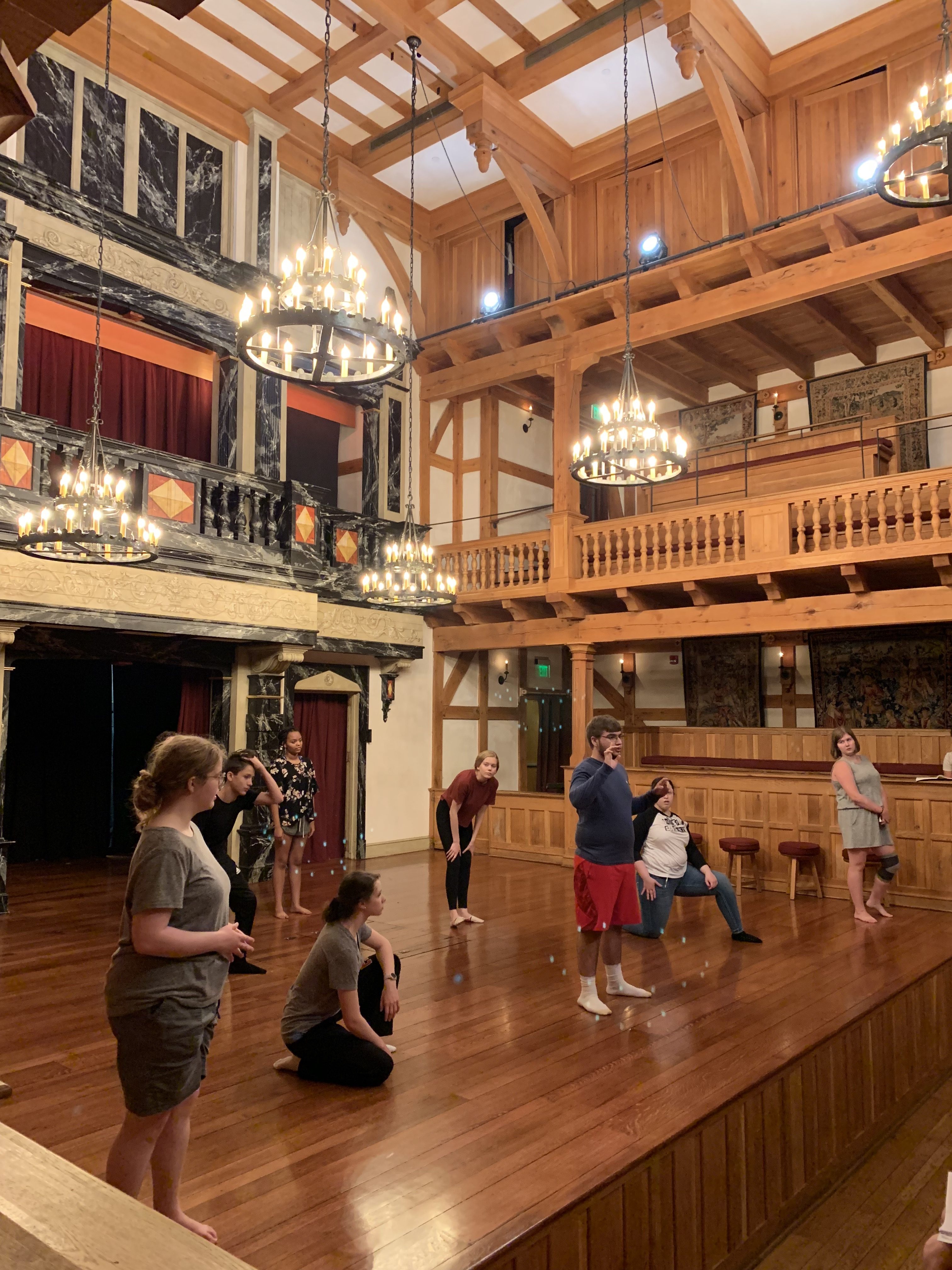 Almost finished blocking the show. We finished choreo for the opening dance – on to music tomorrow! With thirty minutes left of rehearsal in Grafton, we did an on-book run of everything we blocked. Tonight, the cast of Measure for Measure had the privilege of taking our first late night rehearsal in the Blackfriars Theatre, where we got to test out… well, you’ll see!

“It is certain, that when he makes water, his urine is congeal’d ice, that I know to be true!”

– Emily, when the Duke (Bre) tried to sneak offstage in the middle of his scene.

Emily: [singing nervously] “What is the next thing that happens in this plaa -”

One of the secrets to acting is often playing the opposite of what you want to achieve. For example, when you want to seem drunk, try your hardest NOT to be drunk. When you want to play up the sexual tension, keep your distance between you and the person you are supposed to be in love with for as long as possible. The energy between Shakespeare’s sibling pairs is extremely interesting to me in this way: in that, even when you want more than anything for your sibling to NOT know you, they DO. It’s almost a game. And sometimes, that game can be your worst nightmare. The scene in which Claudio pleads with Isabella to subject herself to Angelo’s sexual desires in order to save his life (3.1) hit me hard today for this reason. I watched as two people shared one of the most awful moments of intense understanding between them. As Isabella (Olivia) delivered the news of Angelo’s demand to her brother Claudio (Ben), I had a feeling that Isabella already somehow knew that her brother would react the way he did. And likewise with Claudio, who says something he simultaneously believes and wishes (so much so that he offers up his life) that he didn’t. It makes Angelo’s demand seem ever more the worse. He essentially unearths one of the very few remaining unknowns between a sister and her brother and proceeds to thrust it between them. When Isabella says, “Be ready Claudio, for your death tomorrow,” what follows is one of the most broken exchanges of verse in Shakespeare’s canon:

ISABELLA: What says my brother?
CLAUDIO: Death is a fearful thing.

ISABELLA: And shamed life, a hateful.

CLAUDIO: Ay, but to die, and go we know not where,

To lie in cold obstruction and to rot,