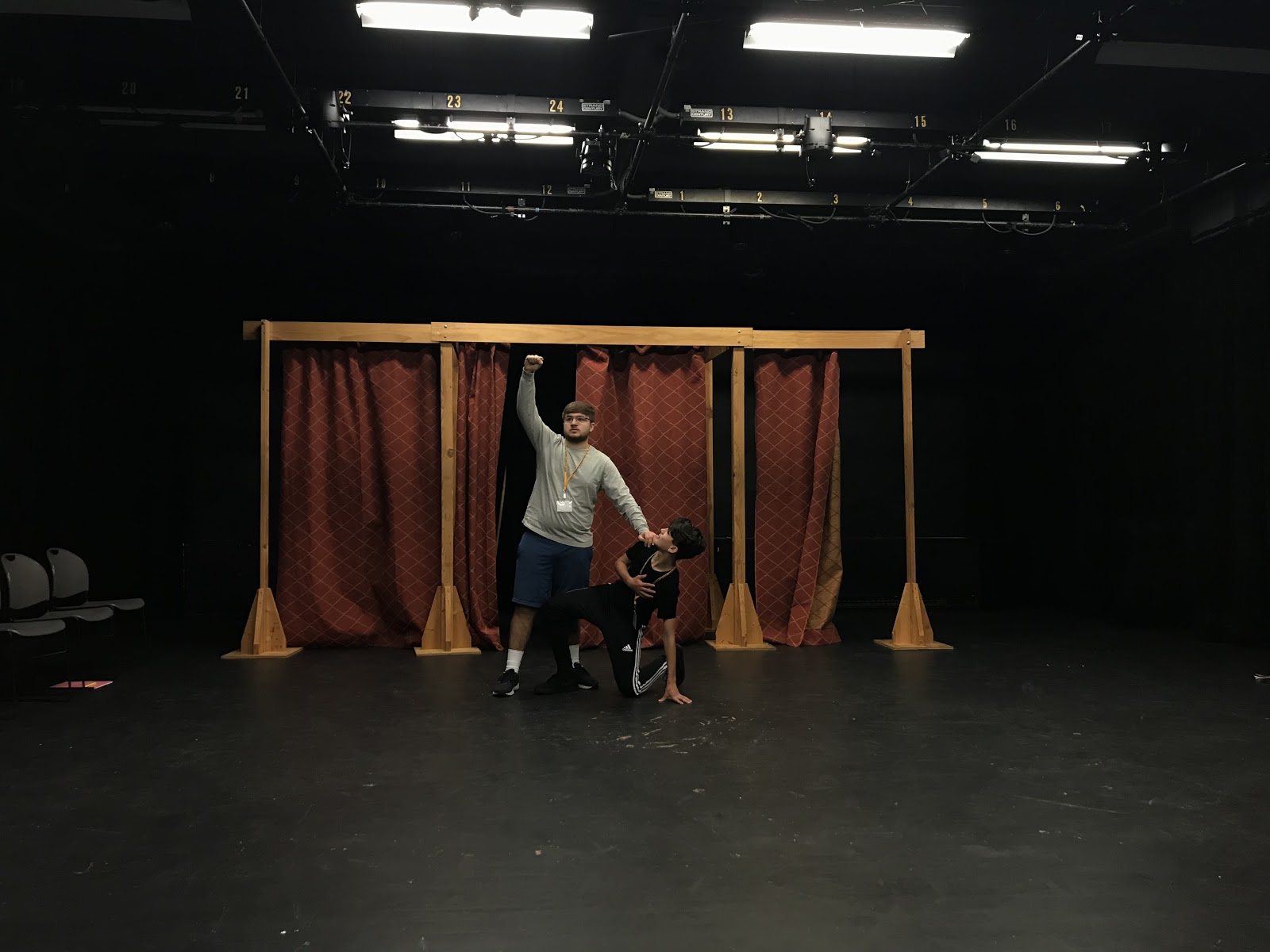 Today was our first day of on-our-feet rehearsal. First, we explored themes of Liberty individually through our bodies. Then we crafted group tableaus to create images of “too much liberty” – Claudio’s answer in Act 1, Scene 2 when Lucio asks him why he is imprisoned. After group discussions of each of these tableaus, we started to incorporate the theme of Justice, questioning which theme (Liberty or Justice) each of our characters represented more. Utilizing our work on these themes, we jumped right into working on our pre-show song and choreography. We loosely blocked all entrances and exits throughout the entire play.

“We have strict statutes and most biting laws.

The needful bits and curbs to headstrong steeds,

Which for this nineteen years we have let slip;

That goes not out to prey. Now, as fond fathers,

Having bound up the threatening twigs of birch,

Only to stick it in their children’s sight

For terror, not to use, in time the rod

Becomes more mock’d than fear’d; so our decrees,

Dead to infliction, to themselves are dead;

And liberty plucks justice by the nose;

The baby beats the nurse, and quite athwart

“So I guess we’re going to solve democracy today.”

“The expression of my liberty was at the cost of his.”

It’s wild how personal Shakespeare can become in such a short amount of time, but especially when we get on our feet and use our bodies to help us interpret the story as well. No shame: as an actor, I usually dread tableau work. I mean, it’s basically you, freezing your body and your face into silly positions for a painfully extended period of time while a bunch of people stare at you like you’re some funky Rodin. But after today, my faith in tableau work has been renewed full-force! I was absolutely blown away by the depth and variety of inferences our cast drew from their own and their peers’ initial stages of in-body work. And it was amazing how immediately and naturally that work launched a rich discussion of the First Amendment (hence, the prompting of Emily’s quote). Shakespeare wrote Measure for Measure in 1603-1604. We don’t even have to try to do the math to understand how similarly we twenty-first century Americans carry our cultural notions of Liberty and Justice in our bodies, and how our struggles for those ideals are not too far off from those of Elizabethan England. I think we took big steps backwards and forwards in time today, meeting head-on the 400-year old text with our modern brains and bodies.