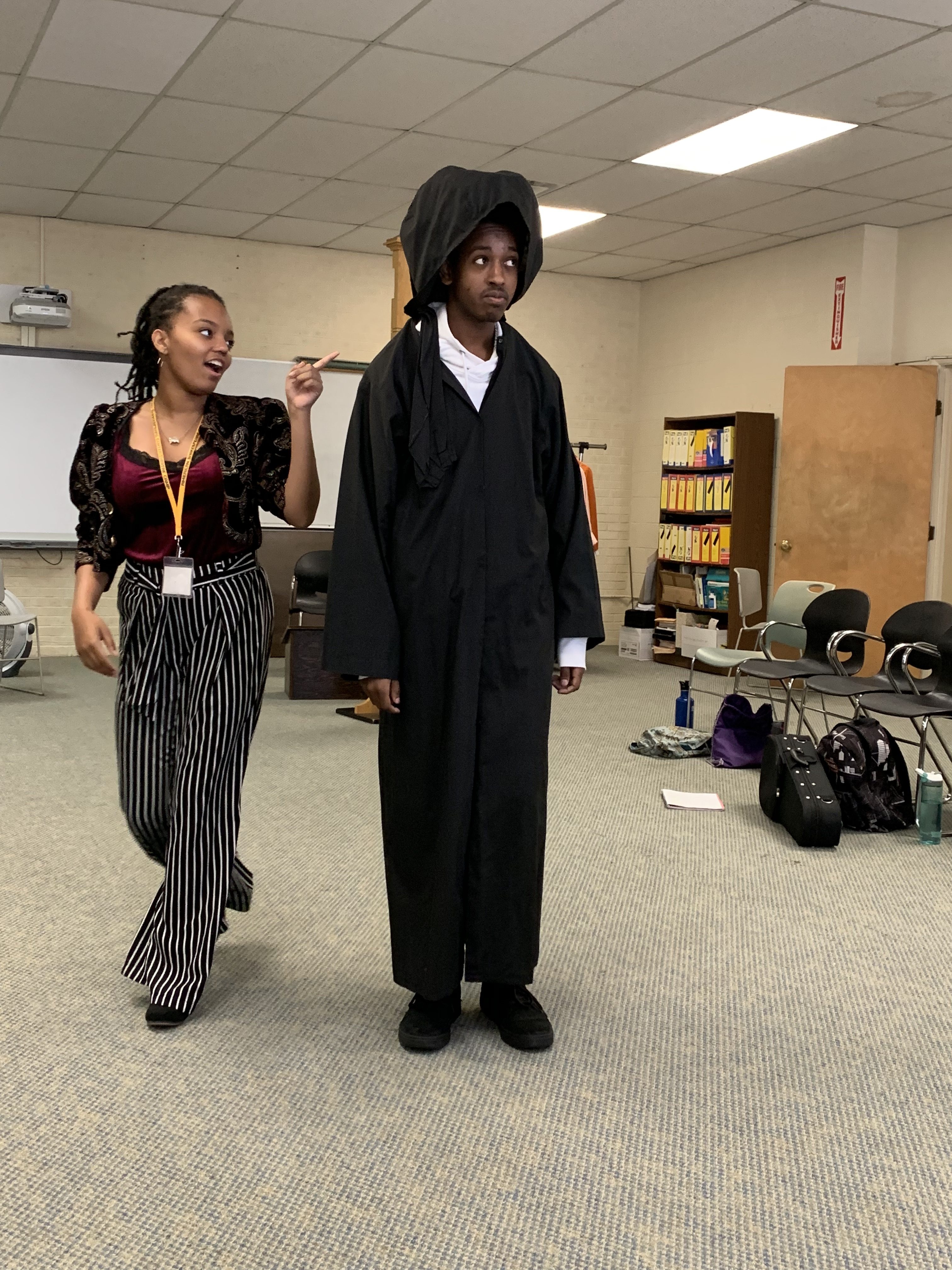 Blocking COMPLETE! We did our regular tablework for Act 5, which, in Measure for Measure and unlike any other play in the canon, is only one, HUGE scene. We then got on our feet and blocked, incorporating some character work as we went. We worked on stage pictures with triangles of power, exploring how our bodies communicate authority in a scene in which airtime for speaking is of tantamount importance… and entirely controlled by men.

“I protest! I love the duke… as I love myself.”

– Emily, on the horrific plot twists in Act 5 (for clarification, the said awfulness has nothing to do with the acting).

Emily: Ben… um… you’re not in this scene.

Measure for Measure is the only one of Shakespeare’s plays whose Act 5 is comprised of one big scene. More importantly, it happens in front of the city gates upon the Duke’s staged return to Vienna. The Duke can’t even make it into the city without this whole trial hitting the fan. Measure’s conclusion of Justice is reached just outside of the city, right on the line dividing urban and suburban. It’s a margin that reminds us of the oddity of the setting Shakespeare has chosen for this play in the first place. Early modern audiences would have assumed – from the Duke’s opening speech about justice in the city – that the action was unfolding in London. It is only just after this monstrously long speech that Escalus unceremoniously namedrops Vienna. That would have likely been a small surprise to London audiences! That said, absolutely zero of the elements of the play – names, clothing, episodes – are Viennese. Instead, Shakespeare seems to have borrowed strictly from his knowledge of Italian norms and traditions. In these ways, Shakespeare was able to write critically about the socio-political environment in England without losing his head for it. My point is, though: we don’t really know where we are. All signs point to… nowhere in particular. So the fact that the end of this play – the final scene AND act, the tying up of all loose ends, and the huge declarations of mercy and justice – occur at a literal margin is, I believe, incredibly significant. Suburbs, for one, were the flowering place of many of the brothels in early modern England. It was because of this phenomenon that the edges of the city center were thought to harbor the seedier residents and industries of the metropolis. This is why, when Portia in Julius Cesar demands of her husband Brutus, “Dwell I but in the suburbs of your good pleasure?” (2.1), it’s one heck of a zinger. Additionally, clergymen were some of the most influential patrons of these brothels, responsible for curating the customer base and a high profile for the brothel owners in the local community. In this framing, the Duke’s disguise as Catholic Friar Lodowick is revealed on this margin of land without the city gates. It is here that the relationship between church and state are, in many ways, in flux. In all of these ways, I want to highlight what I discovered in rehearsal today: that Act 5, Scene 1 occurs, quite deliberately, in a grey area. The city gates might be near at hand – nay, right before us – but we aren’t technically within the safety or jurisdiction of the city proper. The moments in which “justice” is doled out in the form of forced marriage, where disguises of immense religious authority are shed and political identities revealed, all take place in a location Shakespeare leaves completely ambiguous. Personally, it leaves me thinking about how seriously we are led to believe these terms of “justice,” offered so hastily to us at the absolute last minute of this play. I left rehearsal today wondering who, exactly, gets to make those claims? Who gets to set down the definition of Justice and Mercy in the law? And who gets to interpret that law after it is written? The very soil in which Justice and Mercy finally root themselves in Measure for Measure is unmarked territory. Personally, it is this detail that leads me to believe that Shakespeare fully intended for this play to be a “problem.”