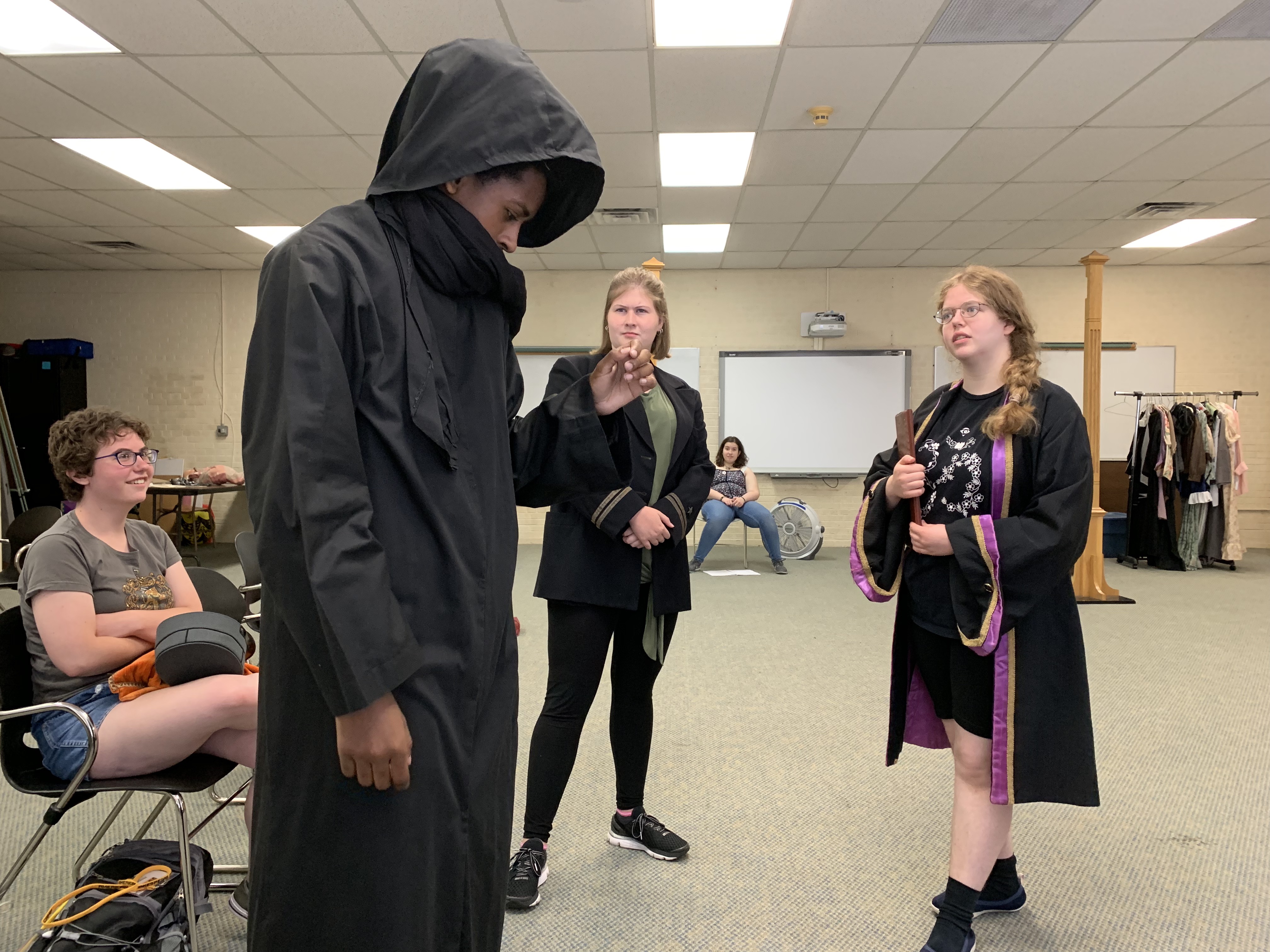 After our start-of-rehearsal check-ins, we hopped into work on the opening number, further polishing rhythms and choreography. Then, we broke into separate groups, putting the final touches on arranging the final song and cleaning up blocking from Act 1 to Act 3. In the meantime, Topher (Angelo) and Bre (Duke) spent some one-on-one time on their monologues and character work.

“We must not make a scarecrow of the law.”

From our rehearsal guest:

– Aubrey, on the feverishly large number of disguises and double-cast actors in the show.

“Your legs are just… so much longer than my legs.” – Hope Napier, deadpanned.

One of my favorite things to research for Measure for Measure has been the etymologies of each of the characters’ names. Last week, one of the cast members, Ben (Claudio), asked why Shakespeare seems to recycle the same names between plays. Claudio is not only the name of Isabella’s condemned brother in Measure for Measure – it is also the name of the young soldier who slanders Hero in the middle of their wedding in Much Ado About Nothing. Measure for Measure’s Claudio also impregnates his fiancée named Juliet – a titular character in another of the Bard’s plays. Escalus is another name shared between Measure and R&J. It’s hard to believe that Shakespeare wasn’t intentional about his character naming, which is why I highly recommend, if you ever work on a Shakespeare production, that you do some cursory Googling. It might be worth it. In the case of Measure for Measure, it was VERY worth it. Below are some of my favorite discoveries:

Isabella… the Latin version of Elizabeth (perhaps a reference to Queen Elizabeth??), which was derived from the Hebrew meaning “God is my oath.” Additionally, the name Isabel was often distilled to the nickname “Tib,” which was shorthand for any woman or girl. Tib was also a name for strumpet, harlot, whore. It calls to mind the Tiber river in Rome.

Elbow… literally a joint! Think of Elbow, the foolish constable, within the frame of the larger “body” politic. It seems that up until this point, the law’s presence has been similarly bendable.

Escalus… is a homophone for the ancient Greek playwright Aeschylus, perhaps meant to invoke notions of culture and intelligence to the audience. It is also comes from the name of the Italian family that ruled Verona in the 12th and 13th centuries: Della Scala – the same family from which the characters of Romeo & Juliet are taken. Lastly, its Latin root is scala for “scales” and its German root means “balance” – two images which recall both the theme of Lady Justice’s balance as well as the very title of Measure for Measure.

Duke Vincentio… is from the Latin vincens which means “winning” or “conquering.”

Mariana… comes from a combination of Mary – i.e. the “Virgin Mary” – and Ana, which is derived from the Hebrew “Hannah”, who is sometimes considered the mother of the Virgin Mary.

Grace Wallis is a quirky Californian and LA native who spent every toasty summer of her childhood watching outdoor theatre. By day, she studies Human Biology and Sustainable Agriculture at Stanford University. By night, she is a sound designer, director, and actor for the Stanford Shakespeare Company. She’s particularly interested in science and environmental communication through theatre and would ideally subsist solely on coffee, oat milk, avocados, the outdoors, Shakespeare, and bread.