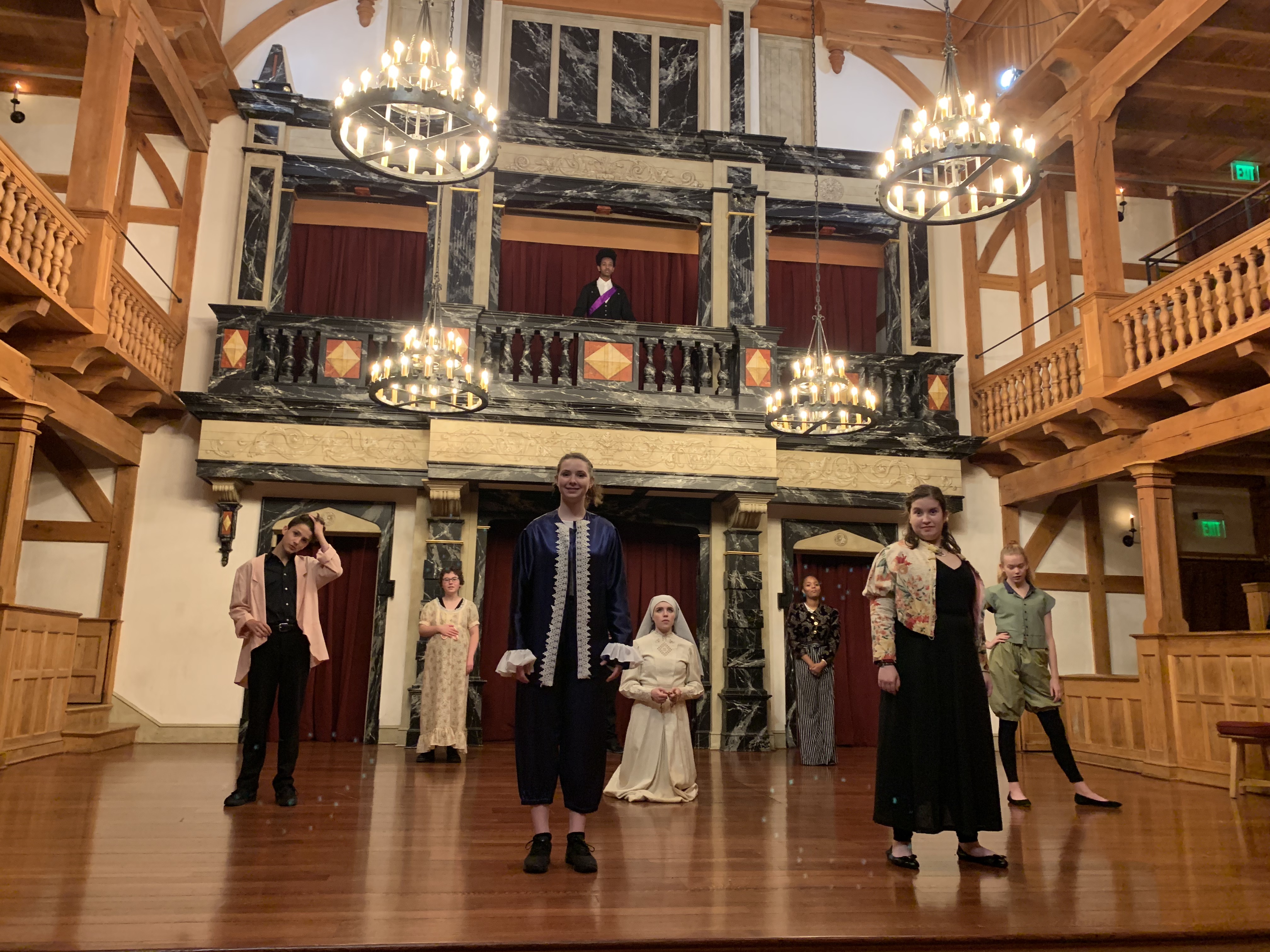 Today, we ran through the show starting from the top of Act 4, polishing our characters’ intentions. Abhorson (Hope Napier) got to start practicing some Axe Jazz, and we ALL got a chance to do the whole show in full costume. Later in the afternoon, we moved rehearsal to the Blackfriars Theatre and re-ran the show. Lines are in pretty good order at this point. Looking forward to all of the juicy fine-tuning work that awaits us in the week ahead!

“This is another prisoner that I sav’d,/ Who should have died when Claudio lost his head,/ As like almost to Claudio as himself.”

“What do you want to talk to her about, Escalus? You’ve got the time to do it!”

“How goes it with you now, my good sister?”

– Sophie (Escalus) to Olivia (Isabella), improving in iambic pentameter LIKE A PRO while waiting for Bre (Duke) to enter.

In my never-ending quest to determine who the justest person in this play is, I am always reminded of the awfully wonderful Barnardine (Mariana P.). The man – who has been imprisoned for nine years under the Duke – is an enigma and seems like a totally random addition to the plot, except for the fact that he also completely knocks the show off its hinges for about ten lines in the middle of Act 4. We instinctively don’t like Barnardine – he’s smelly and difficult and a drunk. But he is also the only person in the entire show who says “no” to the Duke:

DUKE: Sir, I am come to advise you.

BARNARDINE: Friar, not I: I have been drinking hard all night… I will not consent to die this day, that’s certain.

BARNARDINE: I swear I will not die today for any man’s persuasion.

DUKE: But hear you:

BARNARDINE: Not a word: if you have anything to say to me, come to my ward: for thence will not I today.

Barnardine throws such a curveball at the Duke, because he doesn’t behave at all as the Duke expects him to. He mocks the Duke’s “religious advice,” something the Duke horrifyingly takes advantage of (in his hearing of Claudio’s confession as well as his counsel of Mariana) in his friar disguise. In other words, Barnardine calls the Duke out for abusing religious authority without even knowing it. It’s brilliant. It’s a moment that this show desperately needs but never officially, fully gets, because Barnardine is so nasty that he’s reduced to a clown and isn’t taken seriously. The Duke is never reprimanded for his identity fraud, but Barnardine calls him right out for it by simply saying “no.” What’s fascinating to me is when the Duke commands Barnardine, “But hear you,” and Barnardine cuts him off with, “Not a word.” This is really the only moment when the Duke is explicitly not heeded by a subject, something he normally enjoys as the Duke and as a friar. In shutting down the Duke, Barnardine thrusts the Duke’s privilege front and center, right before the final act. Barnardine, in all his grossness, gives the Duke a taste of his own medicine in not lending his ear to authority. He does to the Duke what many men do to women in this play: refuses to listen.