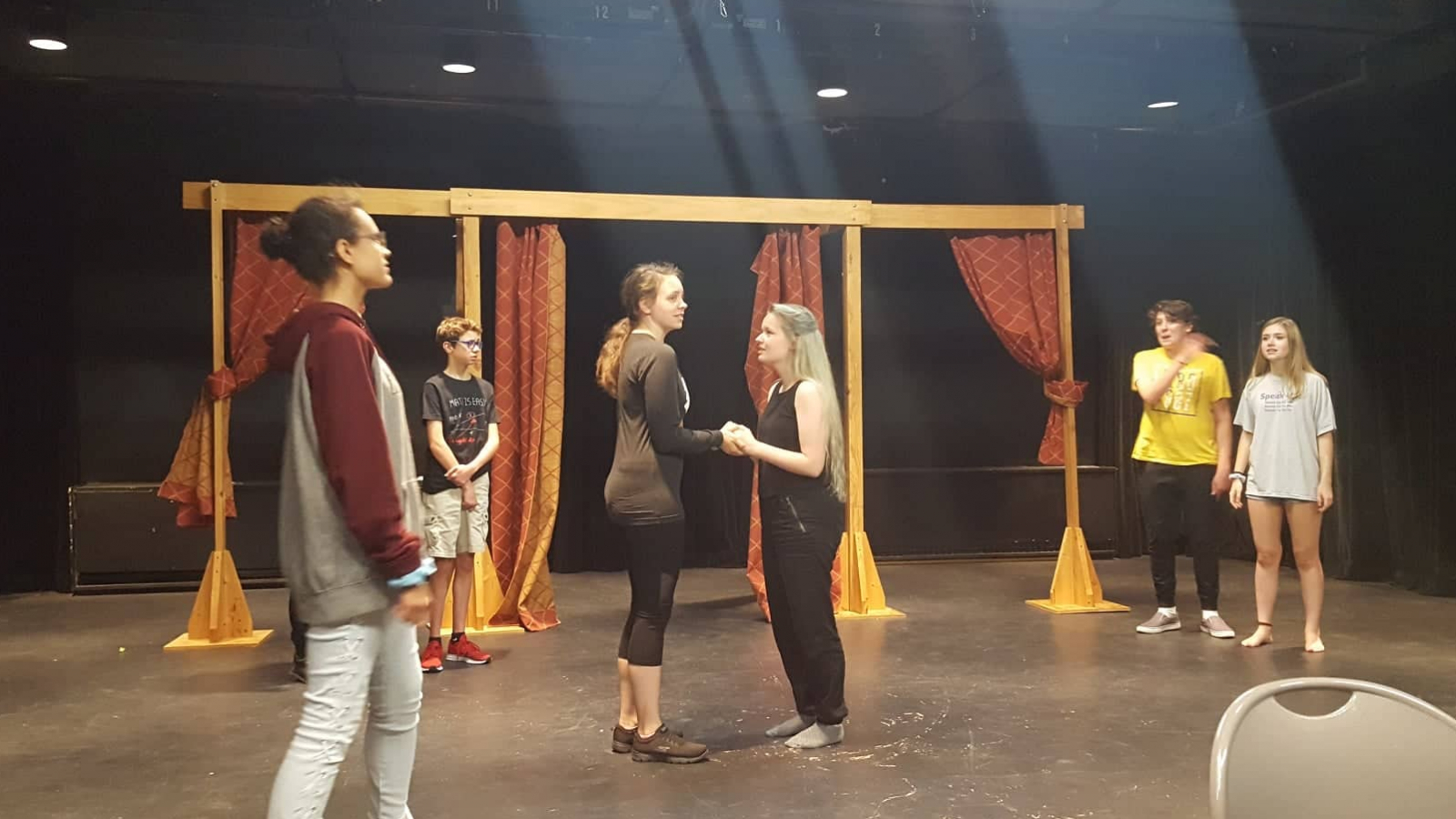 Today was also a change of pace because it was our first one-rehearsal day after a series of doubleheaders and late nights. Tomorrow we don’t have any rehearsal at all because it’s the last lazy Wednesday of camp, leaving us with only three rehearsals left and meaning that we’ve officially entered crunch time. Today, we powered through the rest of our stumble-through from 3.4 onward, made adjustments based on Finch’s notes, and ended rehearsal by trying on costumes. We’re also incorporating show-ready props instead of stand-ins, including some super cute handwritten love notes and a customized book for The Alchemist (Gabe) titled Alchemy for Dummies.

How say you, Tityrus, shall we refer it to Venus?

From the assistant director:

—The cast’s new term for acting . . . with your thighs

Today during rehearsal I finished writing Gallathea’s dramaturgy note! Here it is:

“Initially I was most interested in the relationship of Gallathea’s leading women, the eponymous Gallathea and Phillida, but over the course of the rehearsal process my interest expanded to include those women’s families. Gallathea is full of child-parent relationships both mortal and immortal: there are two pairs of human fathers and daughters—Tityrus and Gallathea, Melibeus and Phillida—and then a godly mother and son, Venus and Cupid. While the play foregrounds the mishaps, pranks, mistaken identities, and romantic antics of young people, in the background it also tests the adults who want what’s best for them but aren’t necessarily sure what that is. The plot hinges on Tityrus and Melibeus’s attempts to keep their daughters safe from the absurd threats of a semi-annual virgin sacrifice and wrathful sea god’s ransom, but by sending their daughters into the woods to hide they instead unwittingly launch Gallathea and Phillida into their adult lives. There, the women encounter something more mundane than a sea god but perhaps equally perilous: same-sex love in the sixteenth century. And Gallathea’s mortal parents aren’t even that different (or more control of their children) than the immortal ones—it’s Cupid’s mom, Venus, who intervenes in the final scene to save the day in an act of magical parental intervention.

Gallathea is about not just romantic love and it’s capacity to transform us, but the transformation from childhood into adulthood—the parents who are surprised by the adults their children have become, or afraid of how the world will treat their daughters and the “hard chance” two women in love will surely endure.”