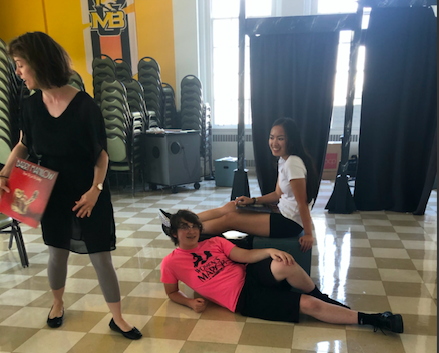 Pictured: Sophie (Bianca) and Isaac (Lucentio) getting ready to run their flirting as Kim demonstrates handing a record to a gallant.

Today, we spent the rehearsal working more scenes including the Katherina and Petruchio wooing scene and the scene in which Hortensio visits Petruchio’s house. We also finalized costumes. After this we ran the song and then ran as much of the show as possible. Next week we will be doing full runs of the show.

“I will be free even to the uttermost as I please in words.”

“She is defiant because she realizes that she deserves respect.”

—Kim about Katherina in Act IV

—Marielle about spinning in a circle.

“I don’t, I just usually sit in my room rotting.”

Here at the American Shakespeare Center Theatre Camp, we find freedom in the words. The campers spend most of their time studying Early Modern language and learn to find a myriad of choices in just a few words. The text is a tool that they use to jump off and create full fledged stories. Here at camp, I like to think that we do more than just put together a show. We are teaching theatre makers how to put together a production. They discover how to do textwork, what goes into cutting, what the context the world is and many more elements of production. When they leave this place, they will be more than just better actors, but started on the path to becoming well rounded theatre artists.