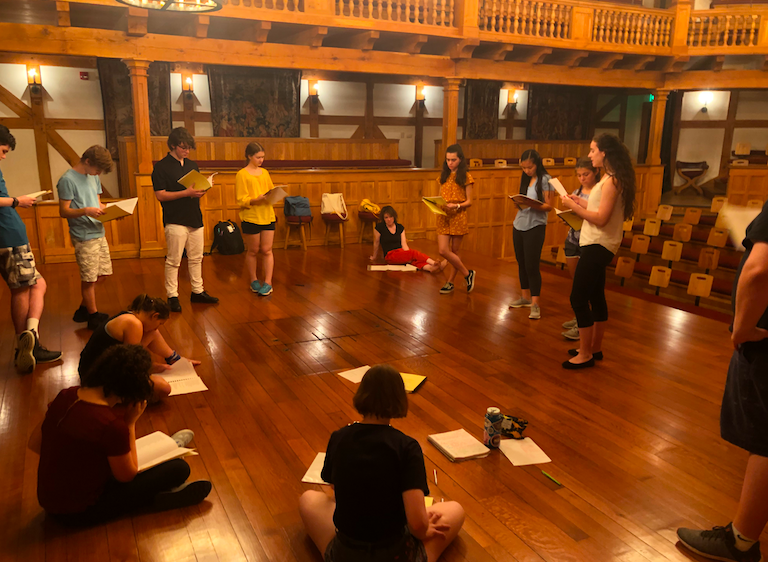 We were extraordinarily lucky to have our readthrough and first rehearsal in the space in which we will be performing just three short weeks from now. Kim ran through viewpoints and vocal exercises with the campers so that they could explore the space and play with their voices and bodies. After this, the cast read through the script and began to connect with their characters and the whole story.

“Here let us breathe, and haply institute a course of learning, and ingenious studies.”

“We have to rely on our fellow castmates to tell the story because none of us can do it by ourselves.”

Kim: “Teagan, what did you learn about the playhouse?”

Hello! I am Margot Flanders and I will be your guide into the world of The Taming of the Shrew’s rehearsal process. This fall I will be a sophomore at the College of William and Mary, where I am studying English and Theatre. I was a camper back in 2017 and I am so glad to be working on Taming after spending last session stage managing Romeo and Juliet.

This rehearsal began with exercises in viewpoints during which the campers went backstage, up and around the house and on the stage itself. Being in the playhouse gave Kim the ability to let the campers explore the space and get a feel for how their voices resonate on the center cut Virginia oak that most of the playhouse is made of. Teagan was right, there is a lot of wood. After this they finished up the viewpoints and exploration, we sat down to read through the script. The cast laughed and starting tomorrow we will dig deeper into what is happening with our problematic script. Now we will listen to Lucentio’s advice to “haply institute a course of learning” and begin the exploration into one of Shakespeare’s earliest and most controversial works.

Margot Flanders was born and raised about fifteen minutes from Staunton in the small town of Fishersville, VA. She is currently studying English and Theatre (and possibly studying Classics and/or Geology) at the College of William and Mary in Williamsburg, VA. She has spent her first year of college as an Assistant Director, Assistant Production Manager, Dramaturg, and Assistant Stage Manager for Shakespeare in the Dark (W&M’s Shakespeare Club), The Sinfonicron Light Opera Company (W&M’s Gilbert and Sullivan based musical company) and the school’s theatre department. When she is not locked in a rehearsal room, she loves to hike, play with her dogs and make inordinate amounts of pancakes.