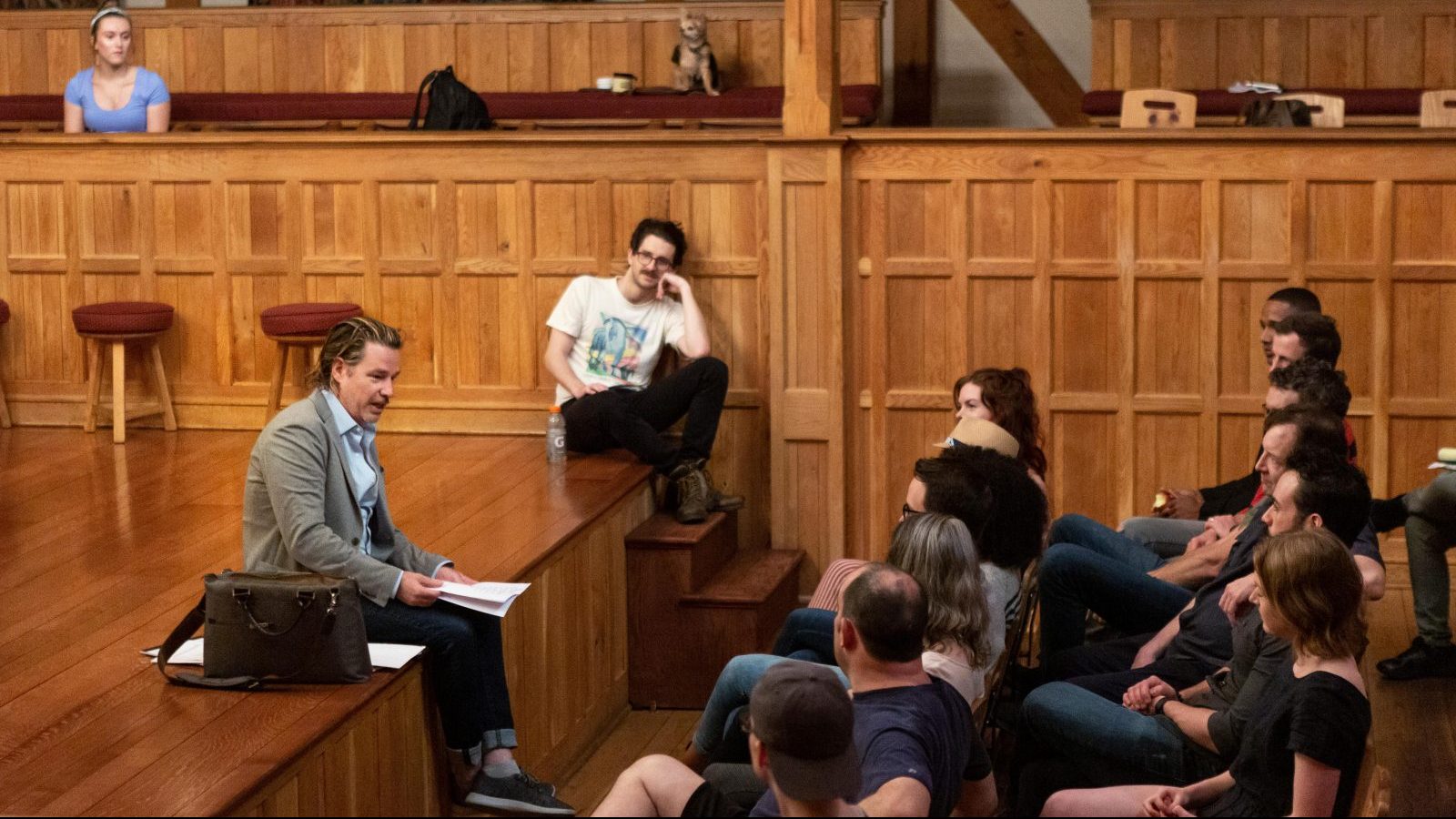 A note from the author:

Sky Wilson, Digital Marketing and Public Relations Manager, asked me to write this weeks ago. But she understands that the SDCF Observer assigned to shadowing Ethan McSweeny never sleeps, and only after recovering from this Roman-bender of an opening repertory (and we’re still warming up for a third) could I find a few minutes to put this whole ride into perspective.

So here it is…how I arrived at the American Shakespeare Center and never really left:

The American Shakespeare Center has been a fixture of my professional life, in the literal employer-employee sense but also (mostly) in the “work ethic, style, and roots” sense. And before I even knew what a professional life was, the ASC shook me by my teenage shoulders and said, “This what Shakespeare’s plays sound like: clear, compelling, and joyful.” It started in 2010, when my parents sent me away to a “Shakespeare camp for wayward high school children” to bone up on my literature and prepare for the first semester of college. They framed it as an either-or decision: either learn something at camp or suffer an additional three-weeks of outdoor labor on the family farm. I’m not much of an actor and definitely not a star student, but I’m also useless at bush-hogging and applied for camp, sight-unseen.

The American Shakespeare Center Theatre Camp—neé YCTC—was not what I expected. It was intellectually rigorous, yes (I still have Dr. Ralph’s rhetoric slideshow committed to heart), but we were also the ASC’s “young company” and, by that suggestion/extension, artists. And when you’re speaking verse on the Blackfriar’s stage at seventeen, it really feels like you’re discovering Shakespeare, obligatory scourge of the ninth-grade English classroom, for the first time… like ever… in the history of drama. Who better to babysit this early-modern high than Doreen Bechtol and Tom Dumontier? It was half-playground, half-bootcamp— truly one of the best summers on record.

The following semester, I co-founded Shakespeare in the Square with fellow ASC camper, Rose Bochner. We were NYU’s first and only (and therefore “premier”) student-run Shakespeare company. We performed in Washington Square Park, “under the sun and in front of a loud, standing, possibly distracted audience.” Our first pull-quote was from Terrence McNally who lived across the street from our outdoor stage and stumbled upon a performance of Midsummer (said quote is still proudly plastered on our website.) The early student productions were imbued—some might say over-saturated—with the ASC ethos: pre-show music, doubling, gender-blind everything, and long afternoons spent paraphrasing in the student resource center.

Now that I was eighteen and a legal adult, the American Shakespeare Center Theatre Camp was hiring! I spent my college summers assistant-directing camp shows and putting out fires—mostly emotional—in various parts of the Mary Baldwin campus (a.k.a. proudly serving as a counselor). Then, in an act of near-perfect symmetry, I graduated NYU (unsure of what would happen to our little campus experiment) and headed back to Staunton to direct an ASCTC show: Henry VI, Part 3, my first foray into Shakespeare’s histories and, boy, what a blockbuster. These campers were the mini-me’s! I had the opportunity to change their lives the way Jeremy West, director of my 2010 camp show, had thrown me into the deep end of theatre-as-a-living and yelled, “SWIM!”

On the bus ride home from Staunton to New York—inspired by this new best summer on record—I had an idea for a show, pitched it (via text) to Rose, and five months later we opened Shakespeare in the Square’s first, professional, Off-Broadway production: a five-person Romeo and Juliet at The Gym at Judson. You could almost smell our ASC pedigree—an uncut, Folio production in a thrust with live music and onstage seating, come on!—except we were working with lights for the first time. This was the biggest gap in our theatre training, but performing in universal lighting (as well as outdoors, in broad daylight) taught us as a company: if the scene doesn’t work under the rehearsal-hall fluorescents, no amount of lighting design is going to save it… But, gosh, it’s nice to have lights sometimes. The show went well, and then we were off to more indoor productions, education/outreach programs, tours, and about two years of 501(c)(3) paperwork.

Suddenly, five years later, I was an “early-career director” (directors get to keep this title until their fortieth birthday) and it was fellowship season. As if on cue, I received an email from the Stage Directors and Choreographers Foundation about a chance to shadow Ethan McSweeny during his first season as Artistic Director of the ASC. The only caveat: “This Observership opportunity is open to directors with an interest in the classical theatre and in learning how it is informed by Shakespearean Performance Conditions.” I sat down with three cups of coffee and wrote an email that truly threaded the needle of cover-letter and homesick-civil-war-soldier.

This summer (the latest best summer on record) marks my ninth year in the tutelage/orbit/company of the American Shakespeare Center and the work, the staff, and the actors continue to strike awe in the hearts of audiences, campers, and SDCF Observers alike.

It’s good to be back. 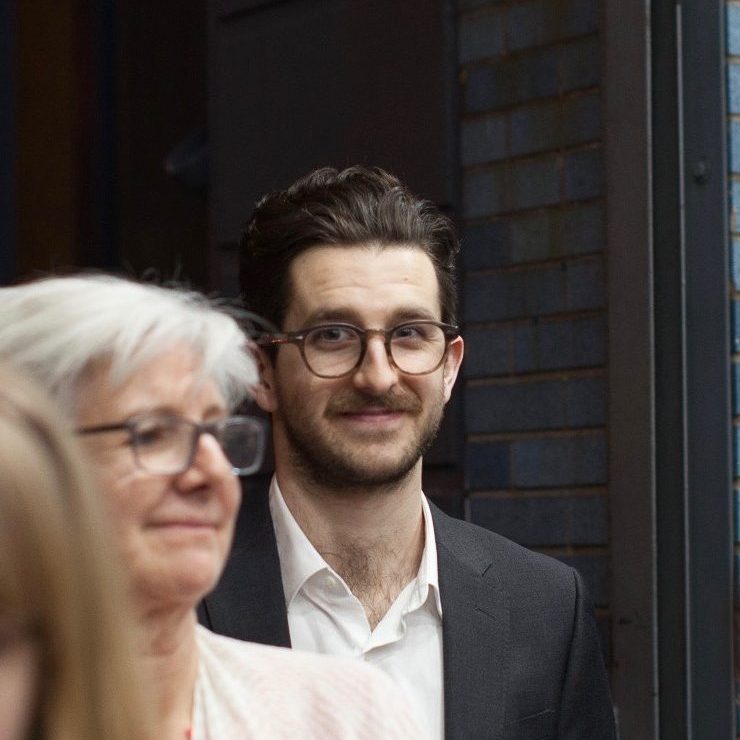 Dan Hasse's first feature film HAMLET IN THE GOLDEN VALE (produced by Roll the Bones with production support from The National Theatre of London) will be available for online streaming in October, 2019. To learn more, visit: www.hamletinthegoldenvale.com