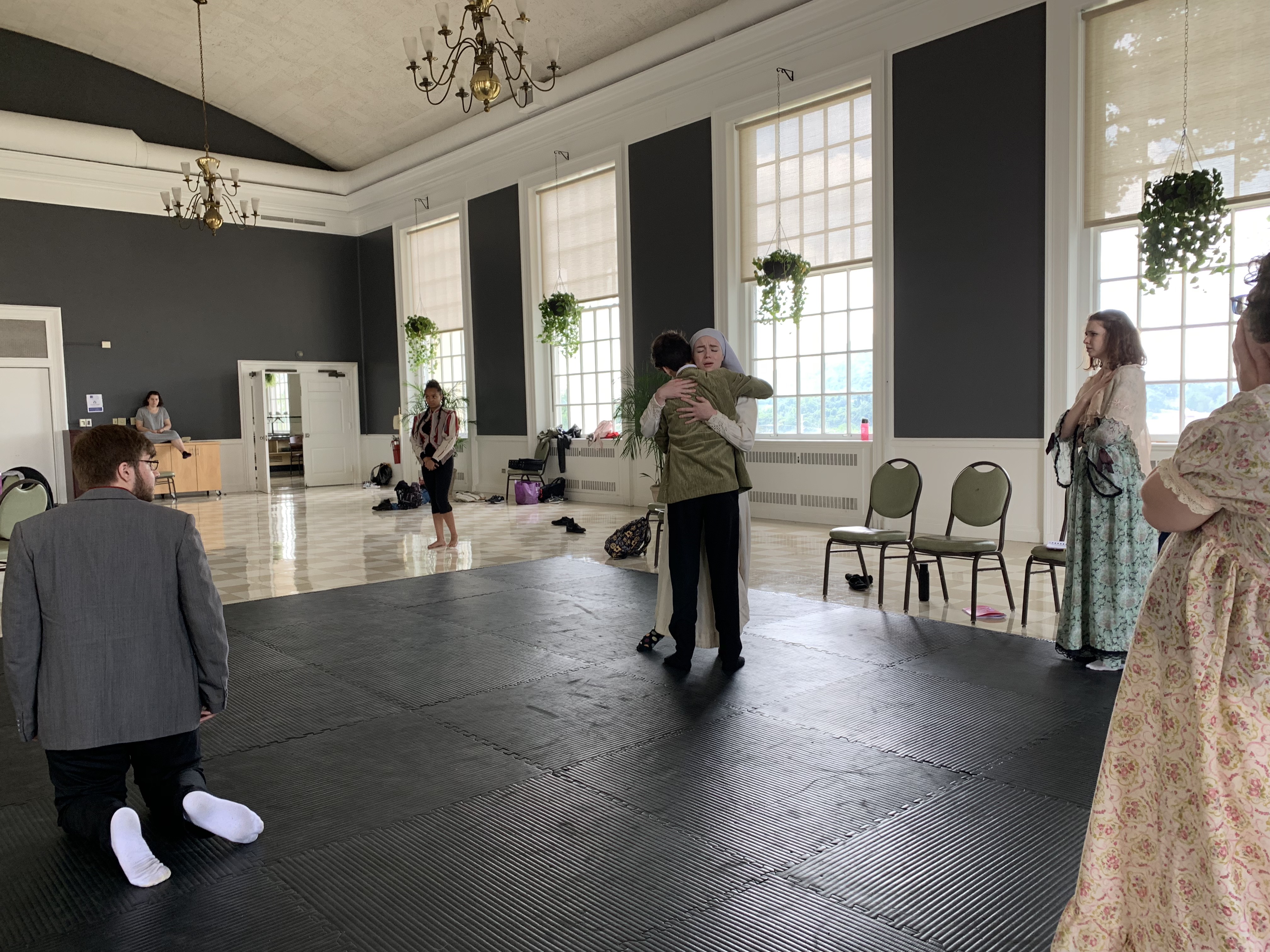 We threw ourselves into our last full run of the show together before the festival tomorrow. After the show’s roughly one-hour traffic on the stage, we all sat down for notes from Emily and reworked small pieces at the actors’ requests. We’re doing some REALLY good work on lifting line endings and juicing keywords. The text has never been clearer – a testament to how diligently, intelligently, and seriously this cast takes its work.

“I like to think that, every time Angelo says words about women, the words actually taste bad in his mouth.”

– Emily’s note to Angelo (Topher) regarding his words in 2.4.

– Topher (Angelo) on the biomechanics of how to hold Dagny’s (Mariana’s) hand at the end of the show.

As someone who constantly questions why we continue to perform and celebrate the poetry of a 400-year old white man, I feel like asking this question of our work couldn’t be more relevant on this Fourth of July.

For the past couple July Fourths, I have picnicked in my neighborhood park with my family, watching the fireworks boom above me, the national anthem blasting across the peopled lawn, and wondered what exactly there was to be proud of, for starters, in purposelessly popping large amounts of carbon-dioxide into the atmosphere. The Fourth of July leaves a poor taste in my mouth nowadays for many reasons (save my mother’s pasta salad), and very little of the childhood specialty remains. It feels less and less like a collective celebration and more like a bitter reminder of our country’s toxic factiousness and all the problems that lie therein. So why do I spend so much of my time with Shakespeare when I could be, quite literally, using my actor’s training to deliver fiery speeches about human rights? It’s an ugly thought, but it is so easy, as a theatre artist in an increasingly hopeless world, to believe the narrative that we “just like to tell stories.” But that’s Complete Bogus. Because, in a time of critical hopelessness, the thing we need the most are stories. Stories are what allow us to think through crises to better solutions, however fantastical those stories and the solutions they offer might seem. This is why, as an artist, I believe that the arts have never been as important as they are now.

Vaughan-Lee, a Sufi mystic, once said, “We need a certain number of people in the world who are present in life as it is [rather than in an illusion], to hold a certain axis of awareness and love in the world, to keep watch on the world and for the world.” This is an incredibly difficult thing to do. It is also what we do every day in rehearsal for Measure for Measure. As young theatre artists, we are the watchdogs of the future. In his article “Will Gen-Z Save the World?,” David Brooks writes, “This generation is… seething with moral passion, and rebelling against the privatization of morality so prevalent in the Boomer and Gen-X generations…” Of all of the productions I have been lucky enough to work on, this one holds the mirror up to Nature like no other. It is, in so many ways, a young American’s perspective on the battleground that is Justice in this nation today. I have faith that, on Sunday, our audience will be transported to our Vienna as I was on the Fourth of July. I also hope that our audience finds room to hope at the end of our show. For that – as our nation’s storytellers emphasize again and again – is half the battle.