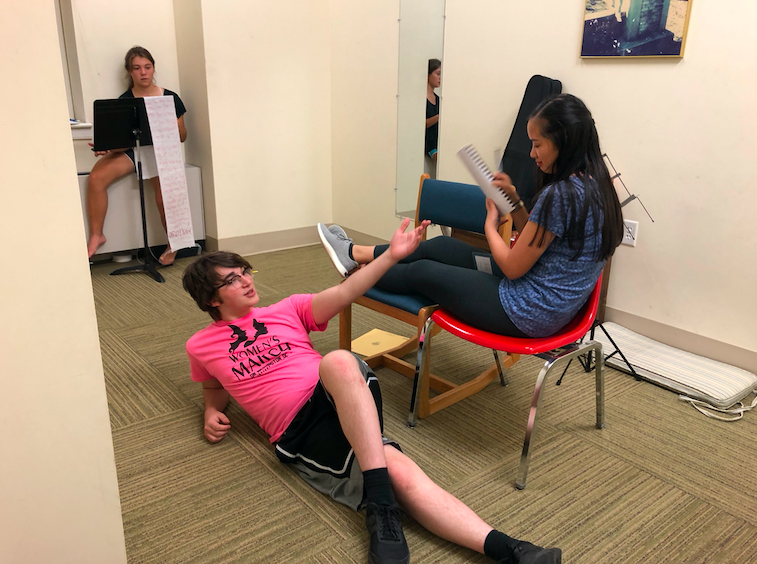 Pictured: Isaac (Lucentio) and Sophie (Bianca) working on being a couple in the 70s.

This morning we began with check-ins after our first week and on our first off-book day. Kim then gave notes from yesterday. We worked and fixed 2.1, 3.2, 4.1 and 5.2. Then we ran the show up until 4.1 then broke for notes and cleanup. The cast has been working super hard and I am so excited to see where they will be in two weeks!

“I know her [Katherina’s] father, though I know not her, and he knew my deceased father well.”

—Kim on Lucentio, Tranio and Biondello’s plan to find someone to impersonate Vincentio.

“Lucentio’s a daddy’s boy. He mentions that his father is Vincentio as often as possible. It’s kind of annoying.”

The relationships between parents and children inform so much of The Taming of the Shrew. Katherina and Bianca only have a father and their mother is absent. This absence has no limits put on it. It is unknown if she died or left and how long they have been without a mother. What does it mean to be a woman raised without a mother and how does that influence their behavior? Does Katherina remember her mother while Bianca does not? The questions go on and on unanswered by the text.

Petruchio also has just gone through a parental change. His father is recently deceased and during his spat with Katherina he may give us an insight to how he is feeling when Katherina says “Yet you are wither’d” and he responds “‘tis with cares.” Something is getting to him. The loss of a father is life altering and how many of Petruchio’s actions have links to grief. It does not forgive them in any way, but it adds another layer to Petruchio. Masculinity is something that is deeply linked to one’s father and how did Petruchio’s relationship with his father inform his own sense of masculinity? Petruchio’s father has recently died, but later in that scene he mentions that his wit is something he got from his mother, perhaps giving the implication of a reverence for his mother. How was his parents’ marriage and how did that inform his upbringing?

Parents play a crucial, but not always noted role in this play. When thinking about the absence of many of the parents in this narrative, I find a lot of questions without answers. Shakespeare gives us a lot, but it is important to note what we are not given.