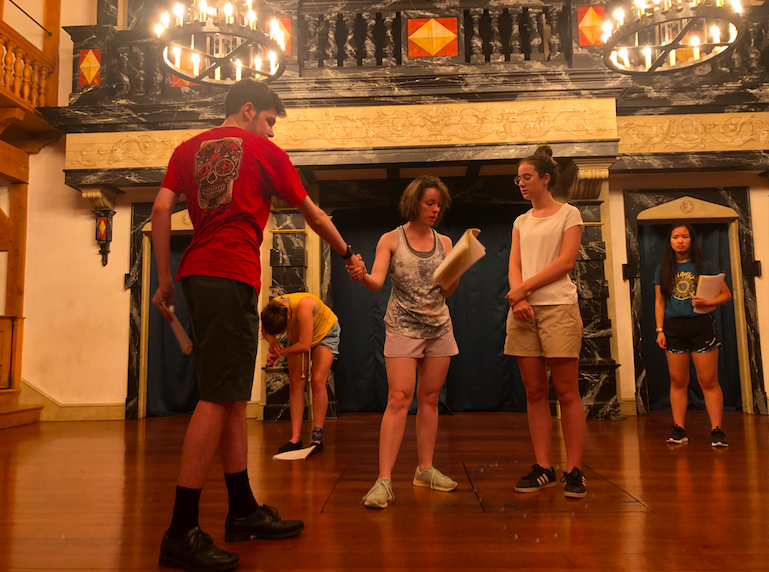 Pictured: Kim instructing Marielle and Liam on how to exit from their wedding scene.

Today, we were lucky enough to have rehearsal on the Blackfriars stage. We used our morning to block complex scenes with lots of characters such as Petruchio and Katherina’s marriage and the first scene at Petruchio’s house with his servants.

“Master, master, news! And such old news as you never heard of.”

“What happens to Bianca if Kate doesn’t get married?”

“I don’t get to marry Lucentio.”

“What happens to Lucentio if Kate doesn’t get married?”

“What happens to Hortensio…”

What happens to Gremio…

“What happens to Baptista…”

In comedies, reactions are almost as important as the lines themselves. Even if a line is delivered beautifully, a lack of reaction can tank the whole scene. This plays into the importance of the ensemble that we are working to create with our team for The Taming of the Shrew. The entire scene needs to be alive and full of energy from the servants to the masters and everyone in-between.

Biondello announces the apparel of Petruchio for his wedding day in Act III, Scene II and shares that (in addition to being late) he is dressed in a disgusting and zany outfit. Everyone else on stage hangs on every one of Biondello’s words and react physically and vocally. They all lean in to hear where Petruchio is and they are not amused when Biondello continues to joke about the situation. When Biondello describes what disgusting clothes Petruchio is wearing, it brings some of the other characters to the brink of being sick. It is a well-used saying, but still rings true “Make huge bold choices because we can always take them back down.” The rule of thumb with reactions in comedies is that the energy needs to stay high and the choices need to stay bold.

Margot Flanders was born and raised about fifteen minutes from Staunton in the small town of Fishersville, VA. She is currently studying English and Theatre (and possibly studying Classics and/or Geology) at the College of William and Mary in Williamsburg, VA. She has spent her first year of college as an Assistant Director, Assistant Production Manager, Dramaturg, and Assistant Stage Manager for Shakespeare in the Dark (W&M’s Shakespeare Club), The Sinfonicron Light Opera Company (W&M’s Gilbert and Sullivan based musical company) and the school’s theatre department. When she is not locked in a rehearsal room, she can be found in a dorm kitchen somewhere making pancakes.