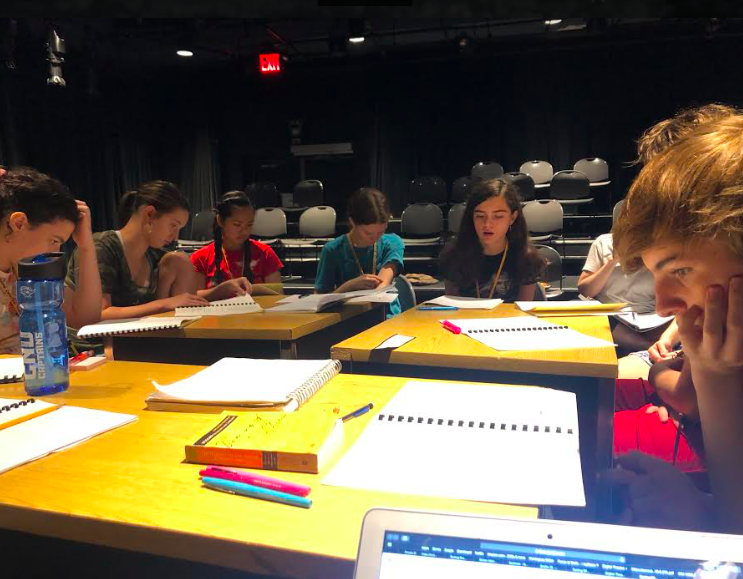 Pictured: The Cast of The Taming of the Shrew focusing on textwork.

We began with a mirror warm-up led by Austin in which campers paired up and tried to synchronize movements with a leader and a follower. It is a great lesson in listening and reacting to your partner which is vital onstage. Then Kim gave the cast a crash course in verse and prose (all campers will have classes on these subjects this afternoon) so that we could begin tablework before throwing the play on its feet. After digging into the text with each camper, we got on our feet to loosen our bodies. We finished up our first rehearsal by discussing the source material, our show song and what the style of our production will be.

From the play (something that stood out to you particularly today)

“O heavens: spake you not these words plain?”

“This is a crash course in graduate level verse and rhetoric work.”

“Ellisions can show that you have a lot of thoughts”

—Campers making discoveries about the text and character choices

In our first full rehearsal after working on ensemble building, we dove right into textwork. Each member of the cast picked a chunk of their text and scanned it with their “crash course” in textwork (as Kim called it). It was read with the iambic pentameter in mind with the da dum, da dum… movement of unstressed and stressed syllables particularly emphasized. While looking at these lines, they all learned more than just what their character was saying. To look at Katherina’s line in Act I, Scene I “A pretty peat, it is best put finger in the eye, and she knew why.” What Katherina is saying is that her sister is just a pretty pet and that she has made herself cry. The crying is what is known as an embedded stage direction, so Bianca knows that she is crying in someway in this scene because her sister references it. Another discovery came with part of Bianca’s following line, “My books and instruments shall be my company.” The team spent a while trying to squish the twelve syllables of that line into ten, but it sounded odd so we began to brainstorm reasons why it could be twelve. Using bits and pieces of evidence from the scene, Sophie decided that Bianca uses the extra syllables to keep her onstage longer. The scansion, rhetoric and context of lines give so much information that is vital to the actors and production. Watching campers discover all of the hidden nuggets within the text itself is one of my favorite things that I found at camp and it fills me with joy to see them experience the same thing.